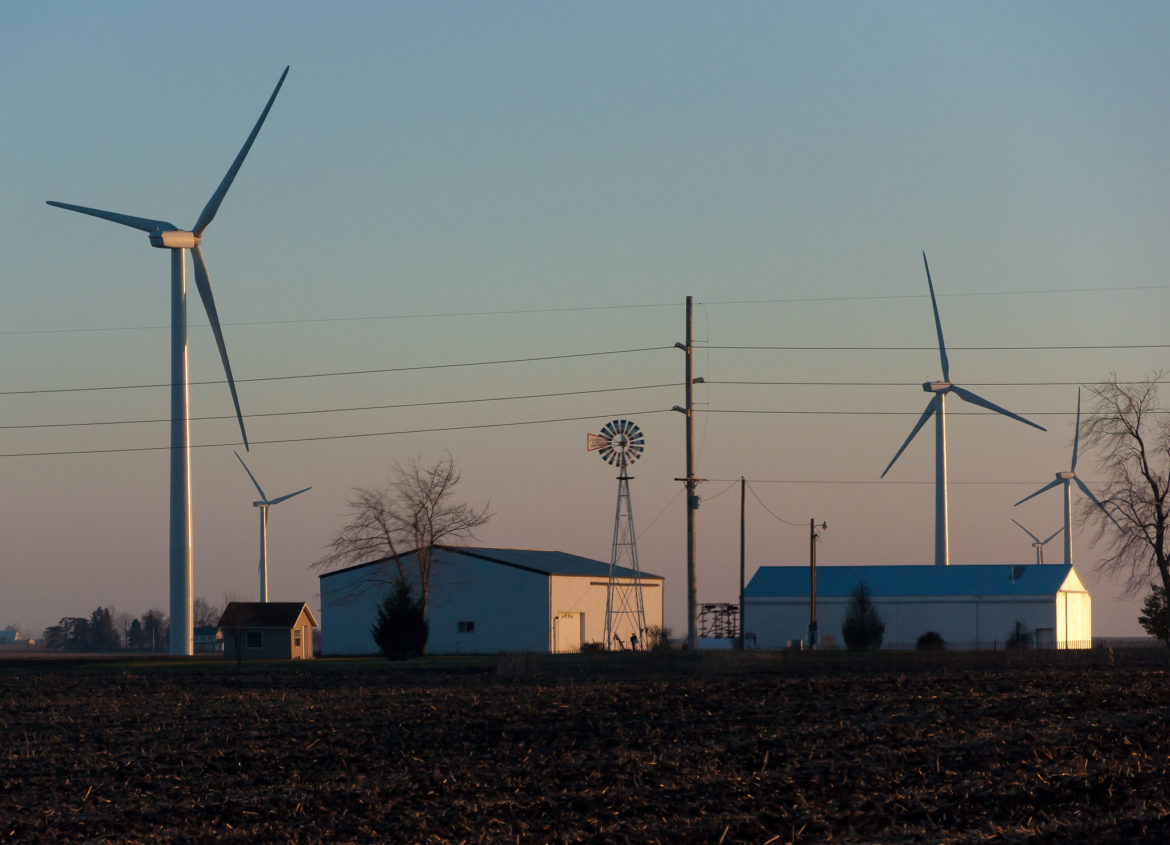 Only two states added more wind capacity than Illinois in 2019, while Indiana saw growth despite a lack of incentives.

Illinois and Indiana both saw significant increases in wind power in 2019, according to the recently released annual report of the American Wind Energy Association.

The gains in both states show the potential for increasing wind power, whether a state has robust renewables incentives, like Illinois, or not, like Indiana.

In both states the progress came despite pockets of vocal opposition to wind energy. And in both states rural landowners, elected officials and other residents say they are increasingly seeing the benefits of wind, with payments to cash-strapped farmers, infrastructure improvements and tax revenue for schools.

Illinois added the third-most new wind capacity in the country in 2019, with 541 MW, behind Texas (almost 4,000 MW) and Iowa (1,739 MW) and just ahead of South Dakota, which increased its wind capacity 50% since 2018. Illinois also became the sixth state to surpass 5,000 MW of total wind capacity, joining Texas, Iowa, Oklahoma, Kansas and California, in order of capacity.

Wind now makes up 7.6% of Illinois’s electricity generation, according to the report — “not an eye-popping number like the 40% you see in Kansas or Iowa, but a sizable percent,” said John Hensley, vice president of research and analytics at the American Wind Energy Association, or AWEA.

Nuclear supplies the bulk of electricity generated in Illinois, followed by coal and natural gas.

Indiana — which gets most of its power from coal — ranks 12th nationwide in amount of installed wind capacity, with 2,317 MW, according to AWEA. It had no new projects come online in 2019 but it had the seventh-greatest proportional increase in wind generation nationwide, up 14% from 2018.

The report notes that Indiana has more than 1,400 MW of wind under construction or in advanced development. And “with a robust wind-related manufacturing base, Indiana claims fifth position for wind employment,” says AWEA, which will hold its 2021 conference in Indianapolis at Cleanpower, a new exhibition hub for utility-scale renewable energy.

Hensley noted that Illinois is well positioned for wind growth for a number of reasons, including that both PJM and MISO power markets cover the state.

“Illinois is right at the intersection of those markets,” he said. “Projects in northwest and central Illinois in the PJM footprint are delivering electricity to that market” in states further east, helping them meet their own renewable goals.

“Illinois is blessed with quite a good wind resource — it helps to have strong winds blowing across the state,” he continued. “And Illinois is a highly populated state with large load centers like the Chicago region where you can build close to the load.”

Also the state’s renewable portfolio standard, “despite some of its flaws and issues, has been a major driver of wind in the state.”

In Illinois, the 2017 Future Energy Jobs Act fixed a flaw in the funding formula for the renewable standard that had virtually stalled wind development. The 2017 law calls for 25% renewable energy by 2025, including 1,400 MW of new wind energy. The state is nowhere near on track to meet its overall renewable goal, in part because of a funding bottleneck in the distributed solar program created by the Future Energy Jobs Act that threatens to halt development if new legislation is not passed.

Illinois appears on track to meet its wind goals, however.

There are currently about 30 wind projects under construction or proposed in Illinois, developed by companies including Invenergy, Orion, Pattern and Apex.

In Indiana, where there’s been little political support for clean energy, a voluntary renewable portfolio standard calls for only 10% renewables by 2025.

Groups like Hoosiers for Renewables are hoping to compensate for the lack of a state mandate by building popular support and market interest in renewables. The group’s website features a petition to elected officials, and short videos showing how wind energy has helped rural communities, including by funding broadband internet installation and local schools.

Last year wind farms paid $10.9 billion in taxes in Illinois, the AWEA report says, and $37 million to farmers and other landowners hosting the state’s nearly 3,000 turbines.

Dave Sinn has two turbines on his farm in central Illinois as part of the EDP Renewables’s Rail Splitter wind farm. He also farms on leased land where there are turbines. “We’ve been truly blessed” with wind power, Sinn said. “We get a lot more out of the windmills than we would raising corn and soybeans.”

Sinn added that he can easily farm around the turbines and that the company is obligated to remove the cement and infrastructure and restore the land when the turbines are decommissioned.

“It helps pay the property taxes, helps pay the bills,” he said. “The way the economy is right now, I feel they are an asset, a guaranteed paycheck.”

There are 34 companies in the wind supply chain in Illinois and the wind industry employed over 8,000 people statewide last year, according to AWEA. Dane Simpson, director of the Great Plains Laborers Employers Cooperation Education Trust with the LiUNA labor union, said that the wind industry has been a boon. LiUNA members pour the concrete for wind turbine pedestals, make road upgrades needed for turbine transport and clean the turbines before they go online.

“When wind farms come to a rural community they not only are providing a clean energy alternative but also providing infrastructure,” Simpson said. “Lots of bridges in areas with wind farms are being upgraded, roads are being widened and resurfaced. Wind turbine pedestals themselves are so large and heavy that they have to build the roads to new standards, these oil and chip roads aren’t suitable for that type of weight load.”

The investment in road infrastructure is especially important given other developments in the economy, he said.

“With many [road] projects tied to the motor fuel tax and people not driving now, and the price of oil and gas cheap, your percentage of tax and revenue from those streams has lessened. So we’re definitely happy to hear Illinois’s wind portfolio is increasing. We’re heavily involved in working with developers, city councils, making sure those projects are seen through to fruition.”

Steve Eberly, an Indiana farmer and long-time county official, is executive director of Hoosiers for Renewables. There are no wind turbines on his 200-acre family farm, to his chagrin, but he has seen what payments from turbines have done for neighboring farms and for infrastructure and the tax base. As a county commissioner in Warren County, he helped shepherd the Jordan Creek wind farm that broke ground this spring. A wind farm had been planned by different developers at that site since 2008, finally realized under NextEra Energy, which plans for up to 400 MW in Warren and neighboring Benton counties.

“With so few people we don’t have much of an employment base, renewables looked like something we should look at,” said Eberly, whose county has about 8,200 people.

He noted that there “are still a very passionate and very vocal group of folks” who oppose the wind farm, even a “barrage of negativity.”

“But we’re about the facts,” he said. “And the facts are that it’s clean, and it’s going to help us keep our small towns alive.”

Texas, Kansas and Illinois were the only states where new wind power was built to be sold on the open market in 2019, according to the AWEA report; most new wind farms were built by utilities or with long-term power purchase agreements in place.

“The fact we do see merchant activity in the state is testament that you don’t just have to rely on a vertically-integrated utility and PPAs and bilateral contracts to get these projects off the ground,” Hensley said.

“You can also rely on the wholesale market and those hedging products that have become more available over the years to find a suitable way to sell the power to the market. It increases the number of options that are available to wind developers. Merchant and quasi-merchant markets are still continuing to grow. Most companies still prefer to enter into some type of long-term PPA to sell their power, and that continues to be the case in Illinois too, but you also see newer, innovative financial products developing.”

Indiana boasted the largest power purchase agreement of the year nationwide, with Northern Indiana Public Service Company signing contracts for a total of 700 MW of Indiana wind energy, according to AWEA. Utilities like NIPSCO accounted for the majority of wind power purchase agreements in the country, but companies like Walmart and AT&T also signed large agreements.

The report notes that more high-voltage transmission lines built between the “wind belt” in the Midwest and the Southeast would allow more utilities there to buy wind energy for their customers.

“One of the major binding constraints is the lack of transmission infrastructure,” Hensley said. “Years ago, MISO was very forward looking and put together projects that focused on large backbone infrastructure that could really open up wind resources throughout the market. Those are mostly fully subscribed now, a few are in final phases of construction or permitting. But even with those additions we’re already running up against capacity on many of those lines.  What’s needed is another round of that intraregional transmission planning.”

He said experts have explored whether shorter, lower-cost transmission lines could help connect wind farms with nearby markets, but found relatively few opportunities for such smaller solutions.

“The system has become so constrained that what are fundamentally needed are these large lines that cut across the whole market,” he said.

The pandemic and the way the government and financiers respond will also affect the wind industry’s near-term future. Wind advocates are asking for an extension of the “safe harbor” provision of the Production Tax Credit, so that projects that qualified for the credit in 2016 and 2017 have an additional year to go on-line before losing the credit.

“We’re also trying to ensure the financial markets continue to operate as pertain to wind,” Hensley said, including by having wind projects “pair up with a tax equity partner to monetize the value of tax credits. With the recession coming out of the pandemic, there is concern the supply of tax equity may be severely hampered. In that case we’re looking for a more direct way of monetizing tax credits,” including asking the IRS to pay out the incentives in cash rather than tax breaks.

The solar industry is similarly asking for a safe harbor extension and cash payouts for the Investment Tax Credit.

Eberly said he hopes wind energy continues to blossom in Indiana, providing a lifeline during times that are only getting harder.

“When I go to the coffee shop, mostly it’s the old farmer guys, there aren’t many young farmer guys,” he said. “There’s a reason for that, the crisis in agriculture. You have to promote what you’ve got, and what we’ve got is a great opportunity [for wind energy], not just our project but across the state.”