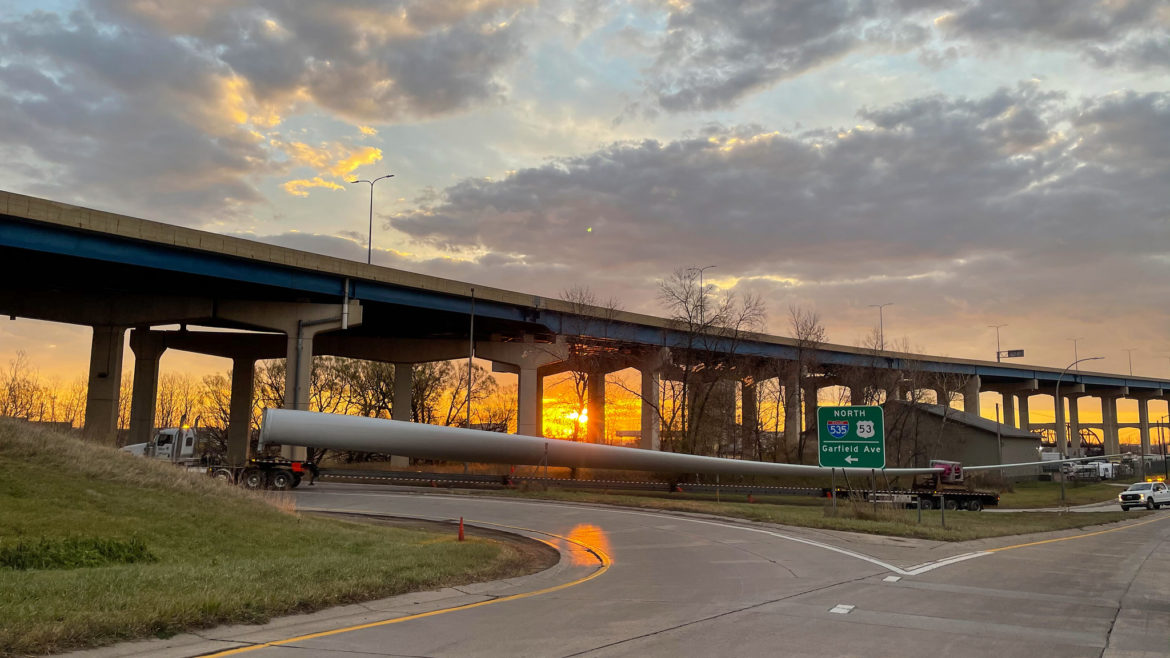 A truck hauls a wind turbine blade near Duluth, Minnesota. Xcel Energy plans to retrofit four wind farms in Minnesota and North Dakota, which the utility says will save customers about $160 million in energy costs over the next 25 years.

Utilities and developers are repowering wind turbines with bigger, better blades years ahead of the end of their original life expectancies as they look to take advantage of technology improvements and expiring federal tax credits.

Xcel Energy recently won approval for a $750 million plan to retrofit four wind farms in Minnesota and North Dakota, two of which were built in 2015. The oldest of the batch originally started generating power in 2008.

Wind farm contracts and decommissioning plans generally set life expectancies around 25 to 35 years. By repowering the projects long before that, utilities are able to boost output around 10% or more, adding power to the grid without facing fresh permitting or interconnection hurdles.

A Lawrence Berkeley National Laboratory study on the wind industry reported a mean age of 11 years for turbines reengineered in 2019. Wind farm owners repowered 1,828 turbines producing 2,864 megawatts, with the most common change being an increase in the size of the rotor diameter. Tower height rarely changed, the report said. The data covered “partially repowered” projects that replaced equipment rather than the entire turbine, an approach Xcel will use.

Repowering represents a substantial chunk of the wind industry’s growth. In 2019, about 2 gigawatts — or one-fifth of all wind projects constructed in the United States — were repowering projects, according to the American Clean Power Association. A recent report from Wood Mackenzie suggested at least 3 gigawatts of repowering projects would be completed this year.

NextEra Energy Energy Resources, one of the country’s largest wind developers and a presence in Minnesota’s wind industry, reported last year that it had repowered 60% of its fleet over the past five years. Another 2 gigawatts of repowered NextEra Energy projects will come online by 2022, including an Iowa wind farm that sells power to Minnesota-based Great River Energy.

“We know that developers are constantly trying to juggle and hedge the risks associated with transmission infrastructure costs and upgrades,” said Jessi Wyatt, an associate energy planner and analyst with the Great Plains Institute. “We also know that the technology is advancing in leaps and bounds, and very well could be making the economic case to the developer to repower [retrofit or partial] earlier in the life of the system for that marginal increase in megawatt nameplate capacity between upgrade and simple end of life.”

Turbine owners can take advantage of the federal wind production tax credit as long as they spend enough on new equipment to qualify it as a new project in the eyes of the Internal Revenue Service, said John Hensley, vice president of research analytics at the American Clean Power Association (formerly the American Wind Energy Association).

The tax credit was set to expire at the end of 2020. In December, Congress voted to extend it one year as part of the COVID-19 stimulus bill. The lack of certainty has encouraged developers to repower sooner than they might have otherwise to claim the benefit.

The 2012 closure of Clipper, once a major wind manufacturer, also fueled at least a few of the repowering projects, Hensley said, as owners looked to replace Clipper equipment and rotors with newer models from existing manufacturers, Hensley said.

NextEra replaced 60 Clipper turbines with new GE technology and rotors at Endeavor Wind Energy Center I & II projects in Iowa. Great River Energy buys power from the wind farm, which started production in 2008 and repowered in 2019.

Digitization represents another significant advancement in just the past few years. Before, wind owners sought to optimize the output of each turbine. Today, the goal “is to optimize the entire site,” which could reduce some individual turbines’ production to increase overall production, he said.

“That’s enabled by the visualizations, the data analytics, the machine learning all those other kinds of data-driven insights that help an operator maximize the operation of the equipment,” Hensley said. “We’ve really seen that happen over the last five or so years, and going through these repowers helps you take advantage of some of those more sophisticated systems.”

Great River Energy renewable resource manager Mark Rathbun said repowering with new rotors and improved mechanics offers “better monitoring of the wind speed and direction, and control of the turbine and an increase in efficiency.” He also pointed to the Berkeley Lab report showing a slight decline in wind source quality for proposed projects, a finding that may result in more repowering of prized wind-rich sites.

Repowering projects also have an easier path toward being built than new wind farms. Contracts with landowners can be extended, along with interconnection agreements. Developers do not have to wait in a queue with the grid operator for the many approvals needed by new projects facing a more crowded grid, Hensley said.

Xcel said upgrading its four wind farms will save customers about $160 million in energy costs over the next 25 years. “Higher production from approximately the same amount of capacity means that, on average, each MWh [megawatt-hour] of energy is less expensive for the customer,” Xcel said. Ratepayers benefit through production tax credits and energy with no fuel costs associated with it, the utility added.

Counties get a bump in revenue, too. Mower County, home to two of Xcel’s projects, welcomes repowering. County administrator Trish Harren pointed to the 100.5-megawatt Grand Meadow Wind Farm, which opened in 2008 and pays around $625,000 annually to the southern Minnesota county, a figure that changes based on the wind farm’s output. After being repowered, the county will receive another $60,000 or more annually.

Repowering projects still need to be approved by regulators, which comes with potential hiccups. Xcel’s proposal generated plenty of debate after the state Department of Commerce declined to endorse the plan because of costs and the bidding process involved. At least one older Minnesota wind farm owned by EDF Renewables also notified the Public Utilities Commission last year that it would not repower its turbines after submitting a plan to do just that.

The Sierra Club and several clean energy organizations supported Xcel’s repowering portfolio and argued the company should consider retrofitting more wind farms. They believe the utility’s analysis was too conservative and that more wind farms could be cost-effectively repowered.

For now, Xcel will focus on repowering the four projects it owns, an initiative that will bring more than 700 temporary union jobs to parts of rural Minnesota and North Dakota while helping it reach a goal of 100% carbon-free electricity by 2050. “Modernizing our wind farms with new technology will increase the amount of low-cost, carbon-free wind energy we deliver to our customers,” a company statement said, “while saving money and putting people back to work.”