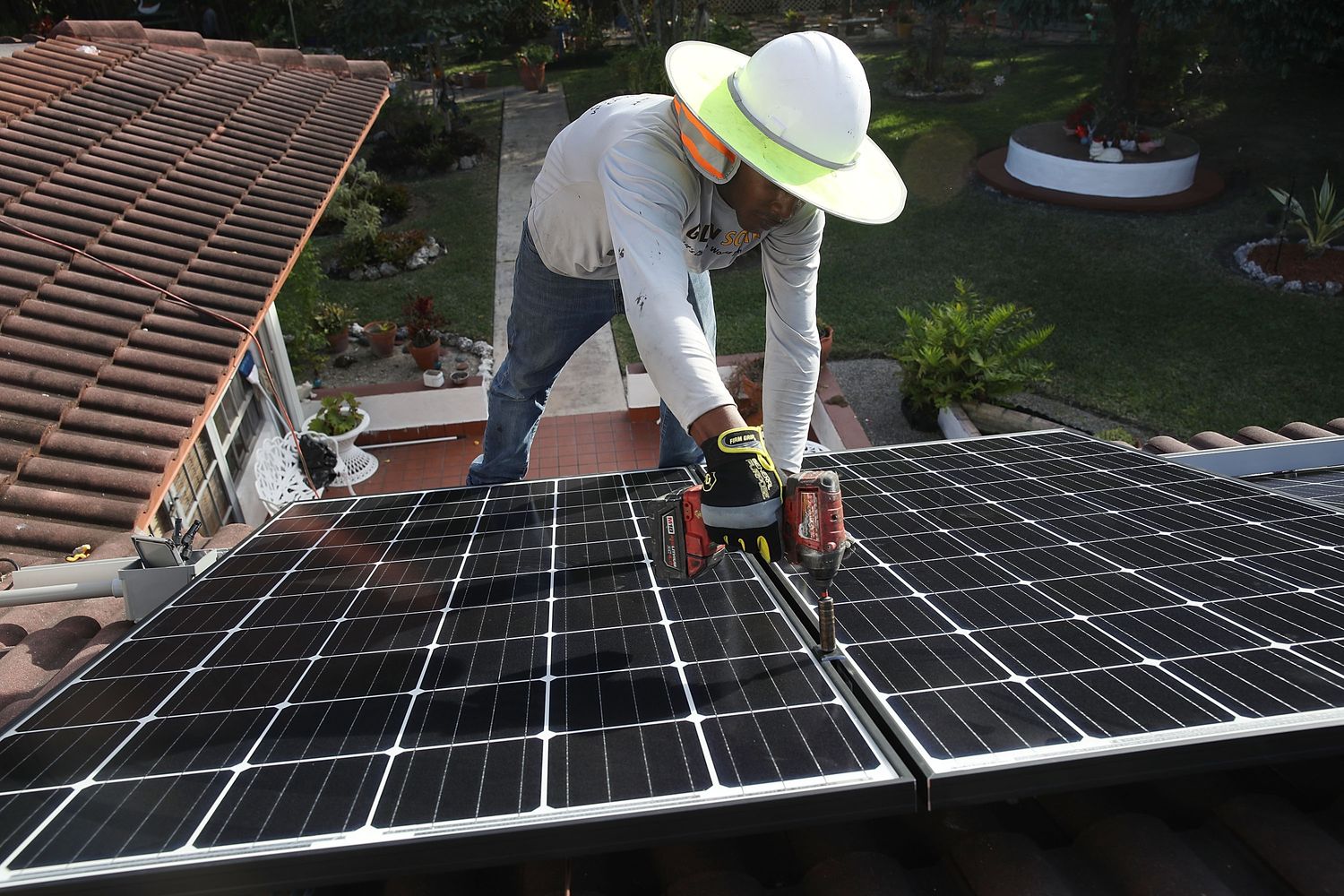 A worker installs a solar panel system on the roof of a home. | Joe Raedle/Getty Images

Dozens of energy groups, state regulators and other officials urged FERC on Monday to reject a petition from a shadowy New England group to end the widespread practice of solar net metering.

In most states, rooftop solar owners are paid the retail rate of electricity for power they ship to the grid — the same rate they pay for power consumed. The petition from a group called the New England Ratepayers Association asks FERC to upend those net metering policies nationwide, taking the issue out of the hands of state regulators and placing it under federal jurisdiction.

If FERC agrees to halt net metering, it would sharply reduce the payments utilities make to rooftop solar owners. In its petition, NERA proposes that most small solar arrays be subject to the federal Public Utilities Regulatory Policy Act, which could lower the rates paid to solar owners by half or more.

The petition attracted criticism from a diverse group of energy trade organizations, free market and environmental groups, as well as state regulators and officials. Iowa’s Republican Gov. Kim Reynolds sent a letter in opposition, as did former Democratic FERC Chair Jon Wellinghoff. The head of a group representing state utility regulators called the petition a “full frontal assault on state authority.” Solar companies said it risks decimating the residential solar sector — and the vast number existing rooftop solar contracts that are built on the arrangements.

“Opposition to this petition is pervasive and the legal and jurisdictional problems the petition would create are impossible to overlook,” said Abigail Ross Hopper, president and CEO of the Solar Energy Industries Association. “It’s hard to fathom why FERC would want to overturn prior decisions and wrest regulatory jurisdiction away from state policymakers.”

The National Association of Regulatory Utility Commissioners also took aim at the NERA filing, calling it an “abstract attack on net metering laws, divorced from any concrete controversy.”

NARUC leaders and other critics have also questioned the timing of the petition, which was filed in mid-April as the number of Covid-19 cases around the country spiked. In a 2014 presentation to utility executives, one of the petition’s authors — Steptoe & Johnson partner David Raskin — urged net metering opponents to choose the right moment to challenge the policy at FERC.

“Timing: Political considerations are important,” reads the last line of the presentation, which was not previously disclosed publicly. Raskin did not respond to a request for comment.

The Edison Electric Institute, a trade group for investor-owned utilities, has opposed net metering for years and worked with Raskin as recently as 2015 on a Supreme Court case. But EEI did not file comments on the NERA proposal and has recently distanced itself from the Steptoe lawyer and NERA itself, which has a dozen members but does not disclose their identities.

An EEI spokesperson confirmed that Raskin spoke at a meeting of the group’s Legal Committee in the spring of 2014, but did not recall details of his presentation. The organization’s regulatory team plans to continue to watch the issue.

“While EEI has long taken issue with retail net energy metering as both a regressive and poor public policy tool that unfairly shifts electricity costs on to the most vulnerable customers, we will not be filing substantive comments at this time,” EEI Regulatory Affairs Director Adam Benshoff said in a statement.

Municipally owned utilities and electric cooperatives, however, joined the calls for FERC to reject the anti-net metering petition.

“[The American Public Power Association] strongly believes that FERC should dismiss the NERA petition outright (without reaching its merits) as it does not present an appropriate case for a declaratory ruling,” said Delia Patterson, senior vice president and general counsel at APPA. “If it decides to address the merits of the petition, FERC should deny the petition and reaffirm its view that federal jurisdiction under the FPA and PURPA is not implicated when a customer participating in a retail net metering program is a net consumer of energy over the applicable billing period.”

Only a handful of organizations and individuals filed comments supporting the NERA petition, though documents continued to trickle into FERC’s eLibrary late on the June 15 deadline. The Heartland Institute, which has sought to dispute the scientific community’s consensus on human-induced climate change, filed a brief comment targeting the beneficiaries of net metering arrangements.

“The United States already has plenty of other welfare programs for the upper-middle class,” the group wrote. “It does not need this one.”