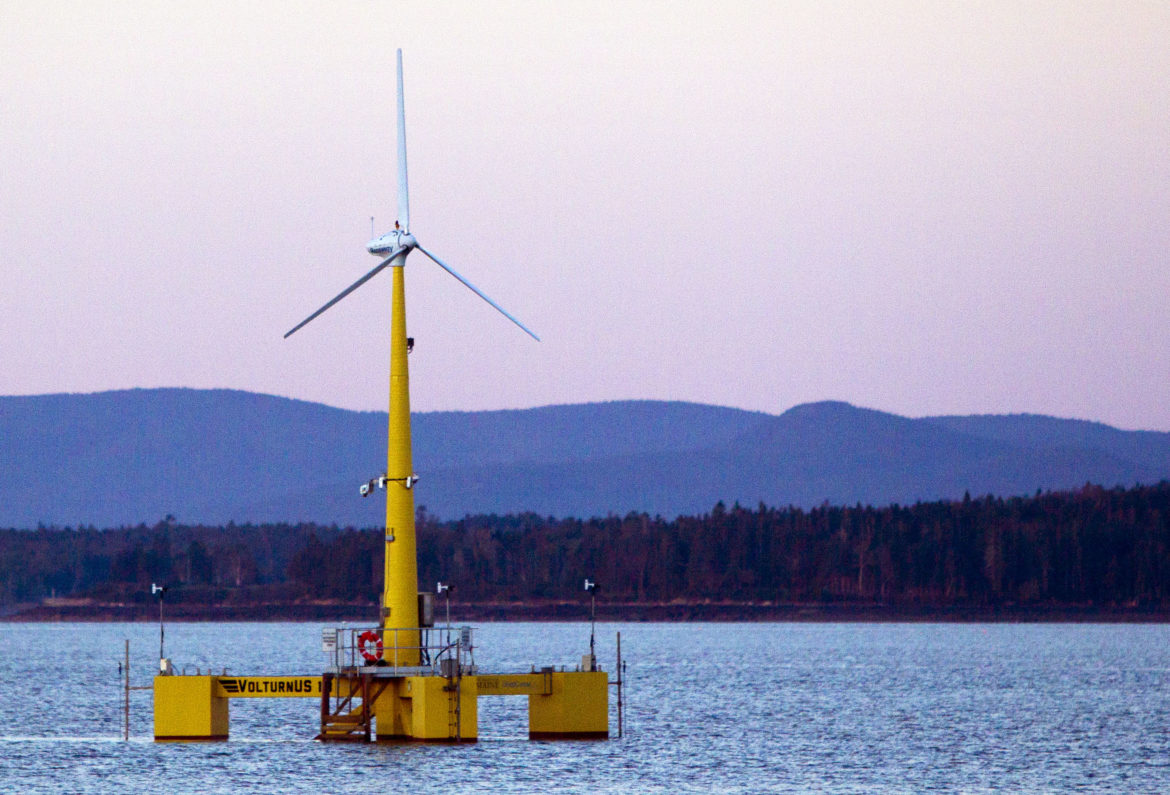 The ocean waters off the state’s coasts are too deep for conventional offshore wind, so researchers are innovating.

Maine’s best hope for tapping into its offshore wind potential took a major step forward this week when developers announced a $100 million investment in a floating turbine project that’s been in the works for more than decade.

The development keeps the New England state on the cutting edge globally for a technology that’s more complicated to build than anchored offshore turbines but a necessity for Maine’s deep ocean waters.

“We really can’t have offshore wind without floating,” said Habib Dagher, executive director of the University of Maine’s Advanced Structures and Composites Center.

Dagher and other researchers at the university have been working since 2008 to develop a floating hull stable enough to hold a wind turbine. They tested a one-eighth scale prototype in 2013.

The University of Maine announced Wednesday that a full-size floating wind turbine is expected to be complete in 2023 with the backing of its new private partners. New England Aqua Ventus, LLC, a joint venture between Diamond Offshore Wind and RWE Renewables, will own and manage the project from permitting and construction through deployment and operations. The university will license its floating hull intellectual property to NEAV.

The project is planned to include the hull as well as a 10-12 megawatt commercial turbine, which hasn’t yet been selected. Diamond is a subsidiary of the Mitsubishi Corporation, and RWE is one of the world’s largest offshore wind developers.

Offshore wind has slowly been progressing in the United States, with one operational farm and more on the way, but the depth of the waters off Maine’s coast means traditional anchored turbines aren’t feasible.

The project will be located 14 miles from the Maine coast, near Monhegan Island. It will supply power to the mainland through a 20-year power purchase agreement with Central Maine Power.

The design builds on segmental bridge construction technology, Dagher said. Each turbine would be attached to a floating hull anchored to the seabed with cables. According to the university, the technology can support turbines in waters 45 meters deep or more. 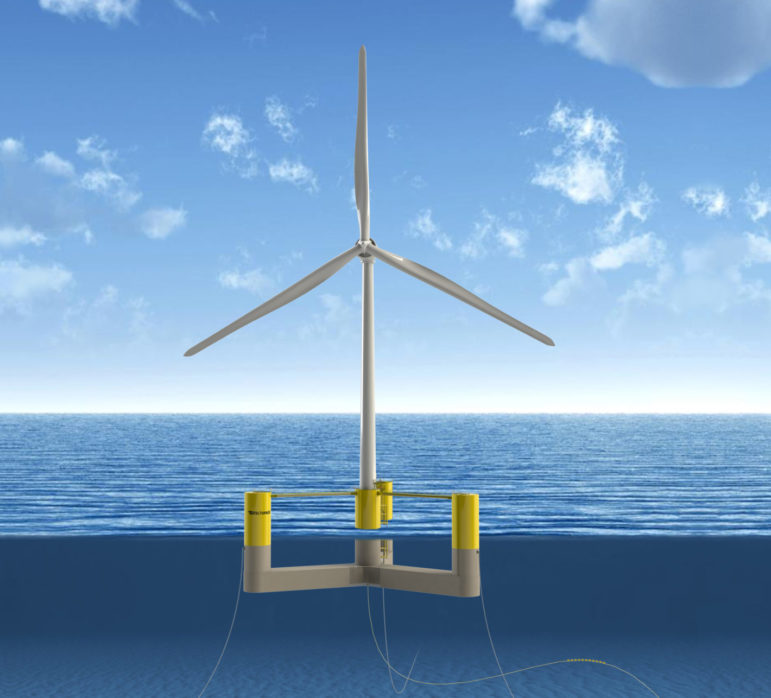 An illustration of the University of Maine’s floating concrete hull design.

Aside from making the offshore turbines possible, the hull can be produced locally, meaning more jobs for Maine residents, Dagher said. A 2013 economic analysis by University of Maine economist Todd Gabe estimated that for a three-year construction period, the 12 MW project could produce as many as 475 jobs a year.

It’s still early to tell what this initial project could bring. The university team plans to monitor the project for five years, Dagher said. “Once we’ve had a couple years of experience… that would certainly give us the technical data necessary to go to the next step,” he said. According to the university, successful demonstration of the technology could lead to a 500 MW-scale project in federal waters.

On the cutting edge

As of now, the United States has never had a commercial-scale floating turbine. The technology is still new globally as well. “Europe is maybe a little bit ahead, but not much,” said Wojciech Wiechowski, a senior manager at RWE.

A 30 megawatt floating wind farm went into operation off Scotland in 2017, and a grid connection was recently completed for a 25 megawatt, three-turbine floating offshore wind farm in Portugal.

“They’ve developed some very interesting technology,” said David Costello, climate and clean energy director at the Natural Resources Council of Maine. He said floating turbines are more complex to execute than traditional anchored turbines, particularly since they’re more difficult to secure and stabilize. But he added that new technology addresses these issues, and this project will help demonstrate floating turbines’ potential.

He also pointed out that the oil industry has used floating platforms for decades. “So the idea of having a floating platform is not new, and the University of Maine seems to have come up with a very good design.”

Floating turbines can also take advantage of stronger and steadier winds further from shore, and are less likely to draw opposition if they’re out of sight from coastlines.

Costello predicts that as Maine moves toward its 100% renewable goal, solar will play a bigger role than offshore wind. Still, he said, wind could be important: The state’s offshore wind potential is 36 times its electricity demand, according to a report from the National Renewable Energy Laboratory on the University of Maine project.

A new report from the Global Wind Energy Council ranked the United States third for projected offshore wind by 2030, after China and the United Kingdom.

“I’m very confident that this project will be a great demonstration project,” Costello said, “and it will lead, hopefully fairly quickly, to the development of some significant offshore wind generation in Maine.”

“We are very excited about the announcement,” said Dan Burgess, director of the Governor’s Energy Office in Maine. “I think that, overall, attracting two world class developers to develop this project in conjunction with the University of Maine is a testament to the opportunity for floating offshore wind.”

He noted that Maine’s governor, Janet Mills, initiated a study of offshore wind potential in Searsport. The town is also likely to be used for some assembly of the Aqua Ventus turbine.

Going forward, Burgess said, it will be important for wind developers to include fishing stakeholders in their planning. This has been a growing issue as offshore wind developments progress, and the university’s announcement said developers are committed to working with the fishing industry.

Burgess added that as the state pursues not only more renewable energy but also beneficial electrification — things like heat pumps and electric vehicles, which would increase electricity use — offshore wind could be important. “I think we see offshore wind as a really great opportunity, for both our energy future and our economy.”