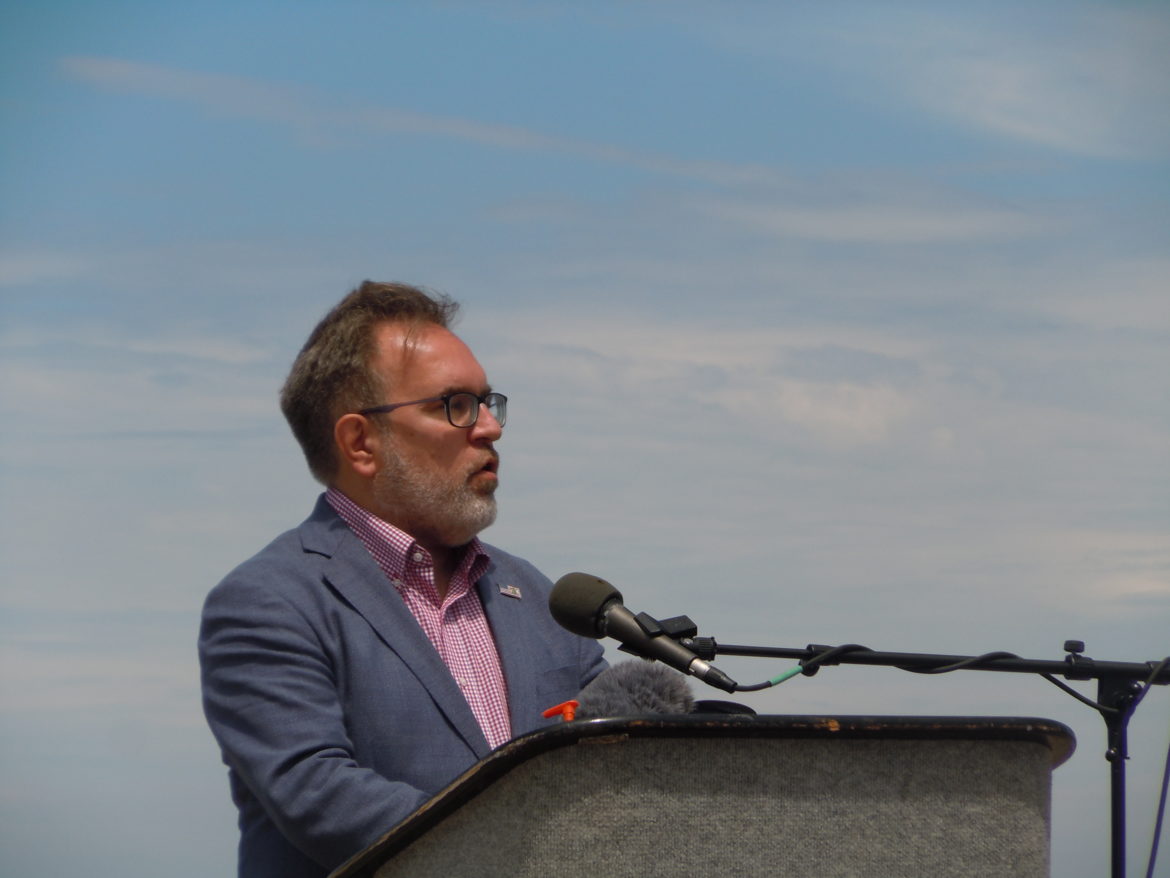 EPA Administrator Andrew Wheeler speaks at an event at the Lake Erie coast in Lakewood, Ohio.

The study linked the EPA’s relaxed enforcement during the pandemic with higher air pollution and COVID-19 cases.

U.S. Environmental Protection Agency Administrator Andrew Wheeler said he had not read a study linking the agency’s relaxed pollution enforcement during the pandemic with air pollution increases and elevated COVID-19 cases and deaths.

The study by researchers at American University was widely reported earlier this month. It used EPA daily air quality readings to find a 13% increase in pollution in counties with six or more facilities required to comply with routine reporting requirements. The EPA said it was freezing enforcement efforts for routine compliance requirements on March 26.

“I haven’t seen that study yet,” Wheeler said in response to the Energy News Network’s question last week at an event in Lakewood, Ohio, where he announced federal grants for trash cleanup in the Great Lakes.

Wheeler characterized the changes as procedural. He also touted a claim that air pollution has gone down 7% since President Donald Trump took office, although he acknowledged that factors besides regulation were at work.

“Certainly some of the air reductions are attributed to fuel switching within the electric power sector, but that’s not all of it,” Wheeler said. Fuel switching refers to more reliance on natural gas as the market for coal has continued to decline, despite the Trump administration’s efforts to prop up the coal industry.

The analysis found that counties where the EPA rollback may have supported increased air pollution had an average 39% more COVID-19 cases and 19% more deaths from the virus.

The particular rollback that the team focused on was a March 26 announcement that the EPA would freeze enforcement efforts for routine compliance reporting during the pandemic if self-reporting of pollution levels was more challenging because of the pandemic. The memorandum also suggested the EPA might not seek civil penalties for going over permit limits if violations were related to the pandemic.

The EPA’s civil enforcement efforts largely depend on that self-reporting, Persico said. The study looked at data collected from sensors in counties with six or more sites that are required to report pollution emissions. Persico and Johnson then compared the timing of those changes in short-term pollution with county data from Johns Hopkins University on COVID-19 cases and deaths.

“It’s expensive to regulate pollution, from the company’s standpoint,” Persico said. But the EPA relies on companies’ routine reporting as the basis for its enforcement. And companies do the routine reporting because otherwise they can be subject to separate and additional penalties.

“If you remove the penalties, it might be cheaper from the company’s standpoint to emit more pollution,” Persico said. And even if companies don’t intentionally decide to exceed their permit limits, relaxed requirements for doing the routine reporting could arguably mean a longer lag time before companies do anything to fix situations that lead to violations.

The EPA may well still be pursuing enforcement against egregious cases, so Wheeler’s statement that the change doesn’t affect the amount of pollution companies are allowed to emit may have some “partial truth,” Persico said. “But overall what I find is that the overall effect was to increase pollution.”

Even before the pandemic, other researchers had noted increases in air pollution since Trump took office, Persico said. She cited a 2019 report on particulate matter for the National Bureau of Economic Research.

Some Ohio counties failed to meet one or more standards in 2018, 2019 and 2020, even if the agency hadn’t changed its compliance status, EPA data shows. The EPA also told The Atlantic last year that increased levels of particulate matter and ozone were likely due to wildfires and weather conditions.

The Trump administration rescinded the Clean Power Plan to deal with climate change, and its replacement has been criticized for potentially leading to more deaths. A July 14 General Accounting Office report also found that the EPA substantially underestimated economic damages from climate change in order to justify its plan.

The EPA has engaged in dozens of additional deregulation actions designed to ease compliance obligations for industries, as noted on the Brookings Institution’s interactive tracker.

“The Trump administration’s policies are harmful to healthier clean air for all Americans,” Learner added.