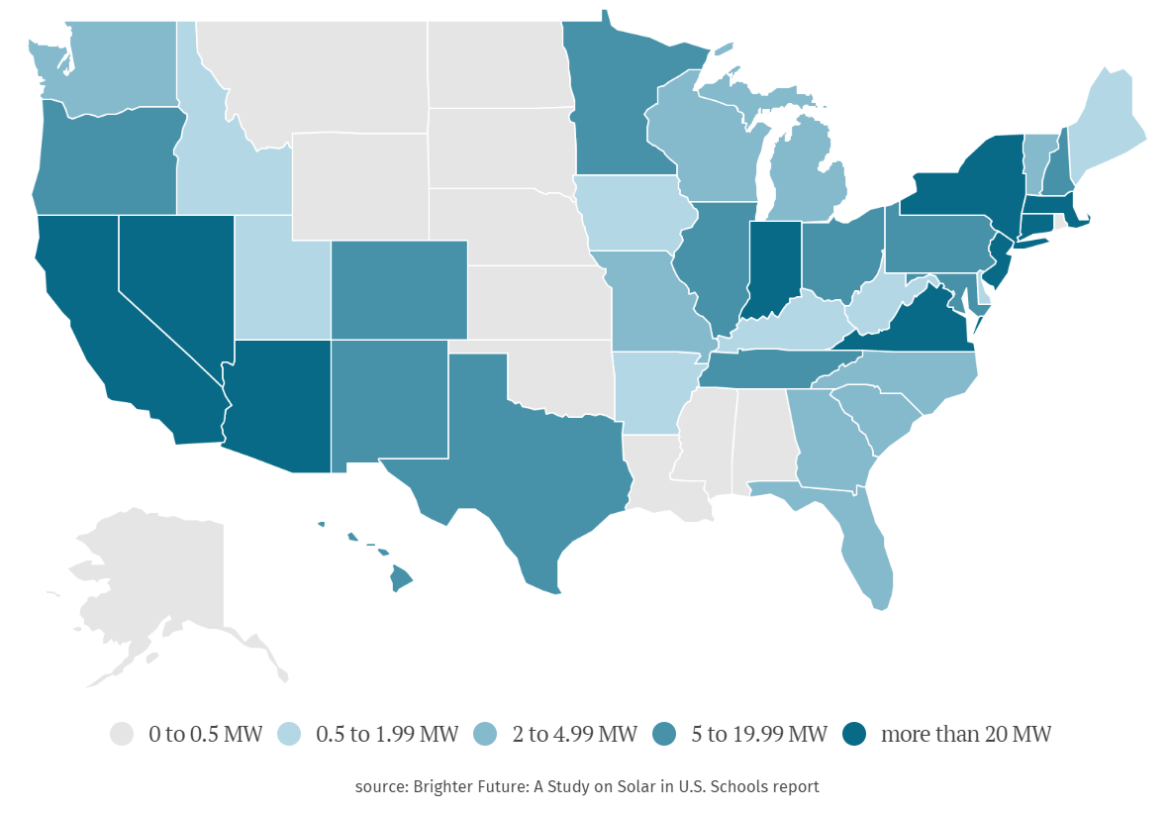 A map illustrates total capacity in K-12 schools by state, as found in the Brighter Future report.

The state jumped up 12 spots and into the top 10 nationally for solar capacity installed among K-12 schools.

California is still the runaway valedictorian of solar-powered K-12 schools nationwide, but a recent renewable energy policy evolution in Virginia has propelled the state to head-of-the-class status.

Since 2017, Virginia schools leapfrogged an impressive 12 spots — from 20th place to eighth place — in solar capacity installed, according to a report released Tuesday by a Charlottesville nonprofit.

Generation 180 collaborated with the Solar Foundation and the Solar Energy Industries Association to compile Brighter Future: A Study on Solar in U.S. Schools. The organization was founded in 2016 to equip individuals and communities across the country to play a role in the transition to 100% clean energy.

Report co-author Tish Tablan is the program director for Solar for All Schools, a Generation 180 initiative. She expects Virginia’s schools to excel far beyond what’s in the report because of breakthrough bills the General Assembly guided into law this year. The report includes data through the end of 2019.

“We want to bust the myth that this is all about sunshine,” Tablan said. “It’s solar policy that is a key driver. The growth of solar on schools over the last several years aligns with commercial and industrial growth.”

The number of Virginia schools embracing solar power grew from 29 to 89 over the last two years and the capacity installed expanded 10-fold, from 1.9 megawatts to more than 20 MW.

When the first iteration of the report was compiled in 2014 — before Generation 180 was founded and joined the mix — Virginia schools ranked 31st, with a measly 321 kilowatts of solar power.

This time around, Virginia joined Indiana and Illinois in earning a shout-out as “most improved” by vaulting from the bottom half to leader status.

“As a Virginian and a parent with kids in school in Virginia, I’m proud to see my state be an example for the rest of the country,” Tablan said.

Nationwide, 7,332 schools — just 5% of K-12 public and private schools — have installed solar power. Over the last five years, capacity has more than doubled from 560 MW to 1,337 MW. By the end of 2019, South Dakota was the only state without a solar school.

Abigail Ross Hopper, president and CEO of the Solar Energy Industries Association, noted that solar installations can help schools put energy savings toward other upgrades, which can be especially helpful when the COVID-19 pandemic is upending jobs and financial situations in many states and municipalities.

“Helping schools make the switch to solar can uplift our communities, drive our stalled economy and insulate our schools from the effects of climate change,” she said. “It’s rare to find a solution that can solve many challenges at once.”

Tablan credits power purchase agreements and other similar third-party financing models as the money-saving mechanisms that enabled schools to shift to solar.

Such pacts are an ideal financing tool for tax-exempt entities because they have little or no upfront expenses and usually pay less for electricity their projects generate.

The third-party owner, usually a solar developer, can qualify for federal investment tax credits and is responsible for buying and maintaining the photovoltaic panels. Credits that net metering customers send back to the grid can offset their bill.

In Virginia, such solar growth was stymied because of a cap on power purchase agreements initiated in 2013 as part of a pilot program for non-residential customers in Dominion Energy territory. Public schools and other non-jurisdictional customers such as municipal buildings, libraries, town halls, landfills, jails and wastewater treatment plants had reached that ceiling by January.

Legislators addressed that squeeze by boosting that cap 10-fold — from 50 MW to 500 MW — when they green-lighted the Virginia Clean Economy Act and Solar Freedom measures in this year’s session. The same legislation also increased the limit on solar for businesses to 500 MW.

Virginia is one of 28 states that allows third-party financing for solar, Tablan said.

“Schools don’t have to pay upfront costs for arrays,” she said. “School boards and administrators don’t have to figure how to squeeze that out of a tight budget.”

That was appealing to Pete Gretz, the superintendent at Middlesex County Public Schools. His rural, three-school district in Virginia’s Middle Peninsula coastal region is in Dominion Energy’s territory.

It became the first district statewide to meet all of its schools’ needs from solar power when it coordinated a third-party agreement with Sun Tribe Solar in Charlottesville.

Overall, he expects to avoid $4.74 million in electric bills over the next three decades with arrays totaling 1.93 MW. That’s significant savings when managing an annual budget of $20 million.

“Utility costs are one variable that could bounce around every year,” Gretz said. “Solar is a no-brainer because the cost of energy never goes up. We’re locked in for 30 years at the high school and 25 years at the elementary and middle schools.”

The initial installation of ground-mounted arrays for the lower grades was so smooth and positive in 2018, Gretz said, that a school board member soon asked, “When are we going to do the high school?”

That project was completed last December and is on track to save $10,000 on utilities in its first year.

Surety on one financial front is a relief when dealing with the COVID-19 pandemic means so much is unpredictable, Gretz said.

Also, he noted that on-the-ground solar has extended lessons beyond the three R’s.

“One selling point was how this is an educational opportunity for kids in what’s a growing career path,” Gretz said. “Middlesex doesn’t have any industry so we have to be creative out here. Plus, it teaches students to think about being more efficient and responsible with resources.”

Richmond-based Dominion is the largest electric utility in Virginia, serving 2.5 million customers in the northern, central and southeastern regions of the state.

Outfitting schools with solar power has proven to be a more difficult undertaking in southwest Virginia. Much of that region is served by Appalachian Power. The investor-owned utility, part of the giant American Electric Power system, counts more than 531,000 customers in Virginia.

A collaborative, the Solar Workgroup of Southwest Virginia, has spent the last five years hurdling a series of obstacles.

They noted that the relatively rapid schedule will require cooperation from utilities as varied as Appalachian Power; Powell Valley Electric Cooperative, a subsidiary of the Tennessee Valley Authority; and Old Dominion Power, a unit of Kentucky Utilities.

The partners are hopeful that this year’s Virginia Clean Economy Act and last year’s law that allowed electric co-ops to expand net metering will allow them to navigate the crucial funding mechanisms that allow customers to lower their electric bills and not have to make upfront investments in solar panels.

One encouraging note is that the laws that took effect July 1 open up the power purchase agreement program to all jurisdictional and non-jurisdictional Appalachian Power customers. As well, they boost the program to 40 MW from a more restrictive limit of 7 MW initiated as a pilot program in 2017.

Still, the workgroup’s solar targets could be tricky because Old Dominion and Powell Valley are operated by out-of-state entities that might not have to follow Virginia law.

Another impediment could well be configuring power purchase agreements and net metering arrangements for schools and municipal buildings in Appalachian Power territory because of an ongoing, complex contract issue.

Generation 180’s research through December revealed that just 22 kW of the nearly 21,000 kW of solar installed at K-12 schools across Virginia is in Appalachian Power territory. That’s one-tenth of 1% of the total.

Interestingly, five of the six projects that comprise those 22 kW were 1.2 kW demonstration projects funded in 2018 by a Dominion Energy program called Solar for Students.

In contrast to that tiny total, she noted that Virginia’s new Solar Freedom measure allows one Virginia homeowner to install a 25 kW system.

Only 3% of Virginia schools sport solar arrays, so Tablan and her colleagues will continue to champion that cause.

However, she mentioned that an upcoming cause for Generation 180 is figuring out how to efficiently move school bus fleets nationwide from diesel to electric power.

“That is really the next big thing to look at because buildings and the transportation sector are the two highest emitters,” she said. “Electric school buses are about student health and the public’s health.”

In Virginia, Dominion has launched an electric school bus pilot program. The utility invited schools within its service territory to apply for a share of 50 buses. Sixteen localities were selected based on the value of batteries to the local grid.

However, efforts to set broader policy for a school e-buses fell apart for multiple reasons near the end of the Virginia General Assembly’s session in March. Both the utility and clean air advocates are figuring out how to jumpstart measures with sufficient legislative appeal next year.

“We’re still in the early adopter phase when it comes to powering schools with solar panels,” Tablan said. “But the next frontier is definitely school buses.”