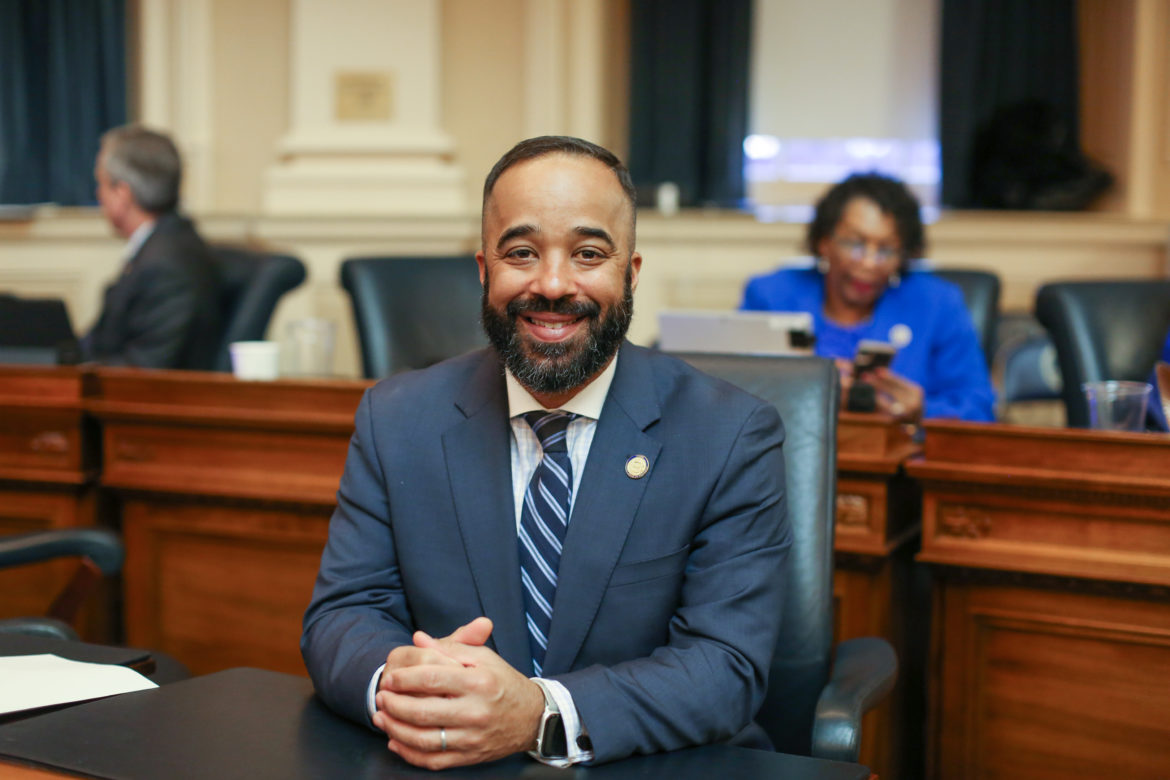 Virginia Del. Jeff Bourne in the House chamber at the Virginia State Capitol. The Richmond Democrat’s House Bill 2048 would allow Virginians to purchase 100% renewable energy from competitive service suppliers. The House passed the bill Friday on a 67-32 vote.

The proposal, which passed Friday on a bipartisan 67-32 vote, would allow renewable energy firms to compete with utilities to supply customers with clean power.

But the Richmond Democrat is delighted that a second iteration — fortified with a measure offering a price break on renewables to lower-income residents — passed the House of Delegates on a bipartisan vote Friday. Now, it’s on to the Senate, which he anticipates will be a tougher slog, even though both chambers have Democratic majorities.

“I was trying to figure out how to marry my interest in energy issues with making our constituents’ lives better by reducing their energy burden,” Bourne said in an interview about House Bill 2048. “It’s about making sure our air and water are clean, just like our energy.”

The gist of his legislation is simple. It would allow Virginians to follow the lead of their neighbors in Maryland and the District of Columbia by purchasing 100% renewable energy from competitive service suppliers. Those independent energy suppliers would be allowed to compete head-to-head with monopoly utilities.

As the law stands now, residential, commercial and industrial customers are hamstrung from shopping for renewables if and when their utility offers what are referred to as green tariffs.

Neither Dominion Energy nor Appalachian Power, the state’s major investor-owned utilities, is under any mandate to pursue their own 100% renewable energy programs. However, both have done so to box out competitors.
Opponents have complained that these tariffs are too expensive and not green enough.

“The bottom line is that in many, many aspects of our lives, people have the choice to procure what they want,” Bourne said, referring to cell phone service and program viewing. “People decide what’s best for them.

“In this case, the social benefit is cleaner energy and a cleaner environment, which leads to more jobs. This is a small part of a big puzzle.”

Two days before the House passed his bill Friday on a 67-32 vote, Bourne said he felt confident it would advance, even though he “didn’t want to count his chickens before they are hatched.”

The bill is now before the Senate Committee on Commerce and Labor. He acknowledges that rounding up enough votes from Republican senators will be tougher.

Brianna Esteves, manager of state policy with Ceres, agrees with Bourne’s assessment. She was pleased when the stronger bill emerged from the House Labor and Commerce Committee last week on a 16-6 bipartisan vote.

“Last year’s version passed in the House, but there was pushback in the Senate,” she said. “This bill shouldn’t be controversial. But we might see the same thing happen again this year. I’m not sure there’s enough interest among legislators to stand up to Dominion Energy.”

Ceres, a Boston-based nonprofit that collaborates with investors and companies on a range of sustainability issues, coordinated support for Bourne’s legislation this year and last because “Virginia ratepayers across the board are frustrated with their lack of access to clean, fair, affordable energy,” Esteves said.

Bourne joined the House in 2017 after winning a special election to fill the seat vacated by Jennifer McClellan, now a state senator.

When his similar clean energy choice bill (HB 889) was sidelined last year, he knew he would have another bite at the apple because it was pushed to the 2021 General Assembly via a procedure called the reenactment clause.

Like last year’s bill, this one also includes a provision to allow large customers — those that use at least 5 megawatts — to aggregate that demand from various sites so they could purchase renewable power from an independent provider.

Bourne’s idea to fold in a 10% discount for low- and middle-income Virginians signing up for clean energy with an independent supplier sprang from his lengthy environmental job experience and conversations with members of the Virginia Legislative Black Caucus.

“Too often, energy policy works for the wealthiest and not those who struggle,” Bourne said. “I think of the residents of public housing in Richmond who are struggling with energy costs and others who have been marginalized.

“In calls we had over the summer strategizing, I realized how important this was to me. My goal was to figure it out.”

Bourne’s first foray into energy policy came after he graduated from the College of William & Mary and delved into car fuel economy standards with the Sierra Club. He continued along those environmental lines while working for current U.S. Sen. Mark Warner’s gubernatorial campaign and then his administration.

“My interest in energy has never gone away,” said the 44-year-old, an attorney who serves as general counsel for a contracting company.

Senior attorney Will Cleveland, who specializes in utility issues at the Southern Environmental Law Center, praised Bourne’s bill for including people at all socioeconomic levels in the transition to clean energy.

“It delivers on the promise of renewable energy,” he said, which opponents have long dismissed as too expensive. “People can have renewable energy and save money at the same time.”

Bourne’s bill also complements a handful of fair energy bills directed at Dominion that are circulating in the General Assembly this year, Cleveland said.

Those are part of a large legislative push this year to empower utility regulators to use cost-of-service analyses to ensure that electricity charges set by monopolies are fair. Currently, the State Corporation Commission doesn’t have that authority.

Dominion is against the effort to restore that power to the commission. Cleveland noted that the utility simultaneously opposes Bourne’s bill on the basis that regulated structure doesn’t allow for competition.

“Dominion is trying to have its cake and eat it, too,” he said. “They don’t want competition or a regulator to oversee their rates, which effectively means they want to self-regulate and preserve their unjustifiably high prices.”

A 2007 law enabled Virginians to shop the market for the renewable energy option they preferred. However, that measure included a “kill switch” that shuts out competitors once a utility rolls out its own green tariff.

In August 2019, Appalachian rolled out what it’s calling Wind Water & Sunlight for its service area in southwestern Virginia, longtime coal country. The 341-megawatt program offers renewable energy from hydroelectric in Virginia and West Virginia; wind from West Virginia, Indiana and Illinois; and solar from Virginia, when it comes online.

Enrollees pay a small premium per kilowatt-hour for the renewable energy option.

About 200 of Appalachian’s 531,677 residential, commercial and industrial customers had signed up thus far, said spokesperson Teresa Hamilton Hall. She added that enrollment appeared to be trending upward a year ago, “but slowed soon after most likely due to the pandemic.”

Appalachian Power, a subsidiary of the giant American Electric Power system, has a much smaller customer base in Virginia than Dominion does. Utility regulators approved Appalachian’s renewable energy tariff in January 2019 after rejecting a similar proposal in 2016.

Before that 2020 approval, major commercial and industrial customers had criticized Dominion for relying too heavily on existing wood-burning biomass from stand-alone facilities and the biomass-fired portion of the output of an existing coal plant instead of investing in new renewable energy.

“Participation in utility renewable energy programs and renewable energy purchases in competitive markets are equally important tools to reach these goals,” they wrote in a Nov. 14, 2019 letter to the State Corporation Commission, citing the companies’ carbon-shrinking targets. “Unfortunately,” the letter continued, Dominion’s plan “fails to meet the criteria we look for in utility programs.”

Esteves, of Ceres, emphasized that customers want to work with utilities to access 100% renewable energy.

“It’s just that they’re not seeing good programs,” she said. “If there were more competitors, then utilities would have more incentive to offer better programs.”

Independent suppliers were able to offer 100% renewable plans to large Virginia businesses on an interim basis while Dominion’s proposal was under review.

For instance, research from CleanChoice Energy shows that between Sept. 18, 2019, and July 2, 2020, some 12,000 business customer accounts in Dominion territory have switched to a competitive supply, representing roughly 1,000 MW peak monthly load.

But Jennifer Spinosi, regulatory and policy vice president for CleanChoice Energy, said those numbers could balloon quickly if HB 2048 is signed into law.

Her D.C.-based independent supplier hasn’t entered the Virginia market on this front yet. The company, founded in 2012, serves residential and commercial customers in the nation’s capital and eight states between Illinois and Massachusetts.

“If this bill is passed, we will get licensed so we can work with Virginia customers,” Spinosi said. “Right now, the rest of the market is shut down because the two big utilities have a one-size-fits-all renewable energy product.”

She pointed to an early January poll of 500-plus Virginians, conducted on behalf of her company, revealed that a majority of residents want the freedom to choose their energy supplier, select clean energy as an option and add more renewable energy to the state’s generation mix.

Clean Choice built a website to educate Virginians about Bourne’s bill and urge them to reach out to their legislators.

“About 100 people pinged their delegate about it,” Spinosi said. “That’s not an enormous amount of attention, but when you’re talking about a utility issue, that’s pretty good.”