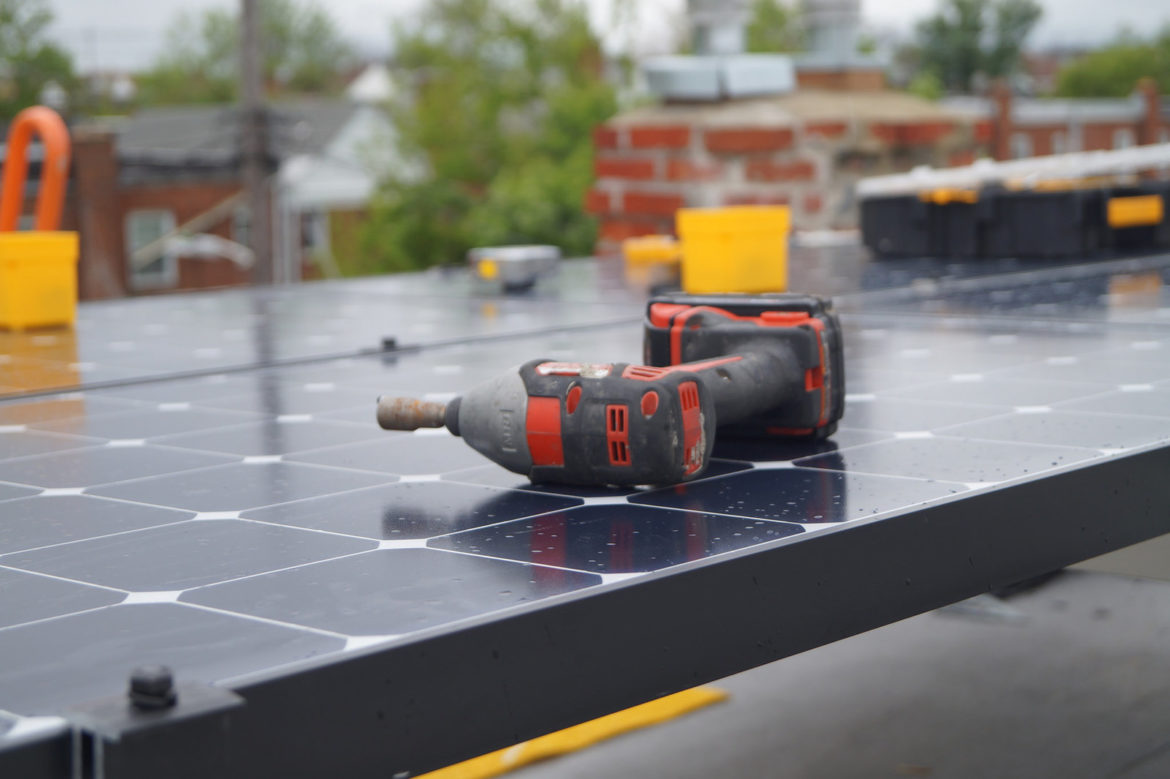 The state’s Department of Mines, Minerals and Energy has launched a technical assistance program for solar projects.

Virginia will have to significantly boost solar energy production to meet a legislative mandate to decarbonize its electricity grid in the next 25 years.

That pressing timeline has prompted a state agency that oversees energy and mining development to help local governments knock down barriers to solar — which now provides just 1% of the state’s electricity.

Carrie Hearne will lead the new Department of Mines, Minerals and Energy solar technical assistance program that is linked with SolSmart, a federally funded, national program. She was hired last fall to fill a new position, solar manager, at the agency’s Division of Energy.

The goal is “to make solar development faster, easier and more affordable,” Hearne said about connecting with SolSmart. “That includes creating efficiencies within localities to reduce taxpayer spending that, in turn, reduces the soft costs for installing commercial and residential solar.”

Her role covers offering specific guidance on permitting, zoning, inspections, and code needs, as well as community and utility involvement.

The Department of Mines, Minerals and Energy, or DMME, is one agency charged with meeting the goals of the Virginia Clean Economy Act, which Democratic Gov. Ralph Northam signed into law last month. The act requires Dominion Energy, the state’s largest utility, to switch to renewables by 2045 and Appalachian Power to follow suit by 2050.

Initially, Hearne and others are focused on recruiting communities in the southern part of the state, where geography, policies, a history of relying on coal and other factors have combined to make the transition to renewable energy trickier — and slower.

Richmond, Roanoke, Charlottesville, Blacksburg, Norton and the Northern Virginia Regional Commission are among the 20 localities that earned SolSmart designation before DMME’s involvement.

Innovators such as Adam Wells said expanding that foundation is crucial to expanding solar access statewide. He is still a driving force with an organization he spearheaded four years ago — the Solar Workgroup of Southwest Virginia — that is navigating the complexities of incorporating renewable energy into an economic transition in the state’s seven coalfield counties. Six of those counties are enrolled in SolSmart.

DMME is a member of a coalition that includes nonprofits, community action agencies, colleges, state agencies and planning district commissions.

“Statewide, there has to be a technical adviser for SolSmart to work. It makes sense for that service to be centralized because of the need to sort through the interplay of local ordinances and state policies.”

SolSmart, funded by the U.S. Department of Energy, was launched in 2016 by The Solar Foundation and the International City/County Management Association.

The idea is to send a signal to developers that a community is open for solar business. Thus far, 350 municipalities nationwide have achieved SolSmart bronze, silver or gold status.

In Virginia, DMME will be drawing on technical expertise of the University of Virginia’s Weldon Cooper Center for Public Service.

“Our work with DMME and the Solar Foundation will help chart a fair and cost-effective path to a clean energy future,” Shobe said.

In her role with DMME, Hearne is also involved with the Clean Energy Advisory Board, created last year to figure out how to share Virginia’s wealth of solar power with the state’s poorer residents.

Its 15 members are tasked with establishing a solar financing program for households with low to moderate incomes. Hearne does not serve on the advisory board, but she co-led its first meeting in December. DMME Director John Warren is on the board.

“While there is not a direct connection between the Clean Energy Advisory Board and SolSmart,” Hearne said, SolSmart participants will benefit from lower costs as well as easier access and installation.

Wells referred to Hearne and Elizabeth Marshall, of the University of Virginia, as the “ideal project team” to be guiding the state’s solar trajectory.

Bizarrely enough, he said, that collaboration emerged as one of the few “happy outcomes” of the COVID-19 outbreak. In March, his solar workgroup’s progress on designing a plan for sharing technical expertise was waylaid by the coronavirus. That proposal was to be a linchpin of the solar playbook members were crafting with funding from a GO Virginia (growth and opportunity) state grant.

“With that delay, partnering with DMME and the University of Virginia became an option,” Wells said. “It makes sense because of the wealth of resources and extra capacity at the department with Carrie and her team.”

Hearne emphasized that her agency not only has a huge presence in southwest Virginia, with offices in Big Stone Gap and Lebanon, but also a trove of data about thousands of acres of previously mined land there.

In tandem with the workgroup, she wants to tailor SolSmart resources to support large-scale solar development on minelands.

Wells and his team have already pioneered one solution by writing a grant to tap into federal money that targets redevelopment on old mine sites. A yet-to-be-built 3.5-megawatt, ground-mounted array in Wise County will eventually power on-site data centers with a net metering system.

It’s the first such project in Central Appalachia and DMME funded it in 2019 with a $500,000 grant. Since 2016, various Appalachian states have been receiving federal money from the Abandoned Mine Land Pilot Program. Money comes from the U.S. Treasury.

“We’ve found a group of people who really understand that making the region a clean energy hub can help create jobs and attract new businesses to the area,” Taylor said about bonding with leaders and residents in southwest Virginia.

Until recently, the workgroup’s attempts to install more than 4 MW of commercial-scale solar across the region over the last several years have been stonewalled.

However, just this month members are seeing signs that several of their 18 initially proposed projects might see daylight soon. Some of that is due to higher ceilings on power purchase agreements spelled out in the Clean Energy Act and the Solar Freedom bill. Although both take effect July 1, utility regulators opted to open the cap in mid-May.

As well, Appalachian Power is encouraging project developers for schools and other government entities to submit PPA applications despite some related complications.

Wells is hopeful the SolSmart alliance with DMME and the university green-light solar across the spectrum.

While the economic and people potential of solar in the coalfields is enormous, the Wise County native’s caveat is that all players adhere to social justice principles.

That means energy developers must invest in the community rather than repeating the extractive methods and behavior of the fossil fuel era.

“We need to invest in the community,” Wells said about connecting solar to the local labor force, education and entrepreneurship. “If we’re going to be mining the sun’s rays and exploiting that wealth, we want to make sure there are long-term benefits.”