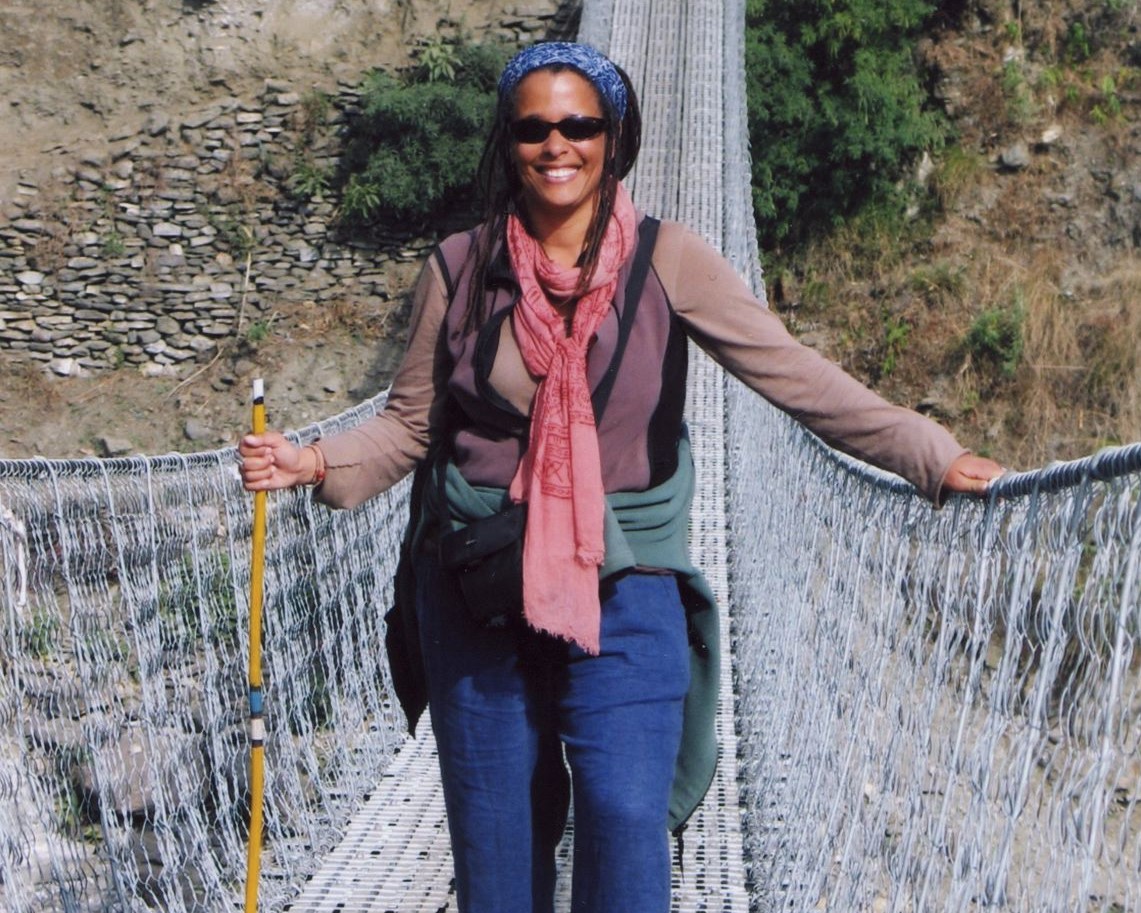 Carolyn Finney on a trip to Nepal.

“Geography is about the relationship between humans and the environment,” says Middlebury College fellow Carolyn Finney.

Carolyn Finney was going to be an actor. But a winding path took her from acting in New York, to backpacking through Africa and Asia, to earning a doctorate in geography in Massachusetts, then on to a career as what she refers to as an “accidental environmentalist.”

Still grounded in the arts, she’s taught at institutions including the University of California at Berkeley and the University of Kentucky. She wrote a book, “Black Faces, White Spaces,” about how the natural world has been understood differently between white and black Americans.

Now, Finney is finishing the first year of a two-year fellowship as a scholar in residence at Middlebury College in Vermont. She’s using her research, her work and her experience to make racial equity and justice a focus in clean energy and broader environmental discussions.

“I didn’t go into this saying, ‘I’m going to be an environmentalist,’” said Finney, speaking on a Zoom call from her apartment in Burlington, Vermont. “It just happened that I kind of came to it, in part because geography is about the relationship between humans and the environment.”

“The question of land and place,” she said, “and whose story counts and visibility, and thinking more broadly about the environmental movement and whose faces we see and who we don’t see. And then the history of it in this country in particular. So that’s why it all took me down that road, which is why I say ‘accidental environmentalist.’”

Finney was asked to join the National Parks Advisory Board in 2010. She’d been speaking to environmental groups about race and equity, a platform that grew with the publication of her book in 2014. These talks usually involve drawing on her own experiences, going back to her childhood in New York. It also means having to talk about subjects that are difficult to discuss, and confront organizational leaders who think of themselves as progressive but aren’t always prepared to consider their ventures’ lack of diversity.

In front of a wall of paintings by Paco Felici and other “outsider artists,” Finney told the Energy News Network about her work and her plans for the near future, and how she helps organizations think about diversity. Her comments here have been lightly edited for length and clarity.

On discussing race, equity, inclusion and the environment:

I usually come into rooms of predominantly white audiences, talking about race. And I know this is going to be a challenge. I’m going to have to say some things about our past. Sorry, it just ain’t pretty. It’s going to be hard for some people to hear.

Ultimately, what my intention is, is that I want people to be able to lean into it. I can’t make anybody do anything. I can only assist and kind of provide them some information and maybe some inspiration to get people to change their minds.

So how I choose my stories and the way that I come in, it’s strategic, and I’m thinking how I use my humor. I make myself completely vulnerable. I always lay my story out, because I want people to remember I’m a human being. We’re human. We have that in common.

Something I say to organizations is, “Please don’t only hire one person at a time who’s your diverse person.”

Whatever that diversity is — physical abilities, color, gender, whatever that is — please don’t just hire one person expecting they’re going to fix your diversity problem. You may not say that out loud, but that’s often implied in there. And then having a problem with retention, because they don’t stay.

What does it mean to actually integrate the question of difference and diversity in everything we do? Not just make it a budget line at the bottom. Or sometimes it’s not even a budget line. Which actually shows that you’re not quite serious.

On connecting with communities:

Sometimes it happens not because the person’s a bad person or the organizations are made up of bad people, but because they really didn’t have the capacity to actually do the work.

Part of that is being aware of one’s own bias. We’re all biased. We have a point of view. Bias isn’t the same as prejudice or racism, but it’s close cousins. You can find yourself participating in microaggressions and you didn’t mean it. But you didn’t know because you’re not even aware of where your own bias lands and what it means when you engage across difference.

One of my last years on the National Parks Advisory Board, they decided they were going to do a big listening tour. They were going to take a year. And I was in charge of the group on diversity and connecting with people in communities. The first stop was Cuyahoga National Park in Cleveland, which is incredibly diverse. We hired local facilitators; we were going to have conversations.

The Park Service was saying, “We’re here for you.” So what happened after that? When we talked with them, they were saying “It was too successful because everyone started showing up.” And they didn’t have the person power; they didn’t have the infrastructure to suddenly have everybody that they engaged with knocking at their door, saying, “OK, we’re in.”

So it can be “successful,” and then you realize, “We can’t do this.”

For an organization of any sort that’s saying that it’s reaching out to communities and they want to listen — yeah, but what are you going to do with that information? A lot of communities are used to now having people come and listen to them. It takes their time, you take their stories and information, and what are you doing with it?

And so now, I would say you have to have a full circle thing to offer people. To say, “We want to come and listen” — and then are you inviting them to sit down with you to construct some new policy action? They want to know there’s something more.

You’re dealing with human beings around some really difficult questions, having to do with energy, environment, place, difference, power. And many of us struggle from this place of mistrust because historically there’s proof that we can’t trust certain groups of people who have power and money to do what it is we need. That hasn’t been proven in 400 years. So you’re coming along telling me you’re gonna do it differently? Really?

It’s going to take some time for you to prove your trust to me before I’m going to give you the benefit of the doubt.

On dealing with coal plant closures:

I lived in Kentucky for four years, where you’ve got a lot of coal plants. My classes were predominantly white students from the state of Kentucky. Some were coming from rural parts of the state, were the first to go to college, whose families worked within coal plants.

If you ask me, we need to get rid of coal. I can say that. And, I know that there are people who will be directly impacted as we get rid of coal: families for generations. So what is the work to make sure they transition? And not just transition with giving them another job. It’s also about where’s the grief, the loss of the sense of who they are.

Let’s not pretend that many of us don’t look down our noses at people who work in the coal mines, like “shouldn’t they know better.” They’re not stupid. How are we working to build our relationships with communities who are struggling and striving just like everybody else?

On working during the pandemic:

Normally I’d be traveling every week. It’s been years since I’ve been in one place, home for five weeks in a row.

And racism never sleeps. Climate change never sleeps. These things are still happening. As a matter of fact, they’ve both been exacerbated in very different ways.

We’re seeing the imagery of not as much smog in L.A. because people aren’t driving their cars. The Himalayas can be seen for the first time in years. Wildlife are coming back to some spaces where we are not.

We are also seeing brown, black and indigenous communities faring worse than anybody else during the pandemic because of structural racism and a lot of inequities that have been in place for a long, long time.

On her forthcoming one-woman show:

Of the many books that John Muir wrote, one was called “A Thousand-Mile Walk to the Gulf,” about his walk in 1867. He wanted to see the impact of war on the landscape, and he walked through a number of states in the South.

In his own words you could see where he was racist. I’m not trying to be unkind to John Muir, but John Muir was definitely unkind the way he talked about black folks. And I thought, well what if a black woman wrote the same book at the same time?

She couldn’t freely move through that landscape. Which doesn’t mean she didn’t appreciate it. But she certainly engaged with it differently than someone who looked like John Muir.

I don’t want to diminish John Muir. But I want to point to how his privilege allowed him access in a way and a point of view that’s problematic for so many people who have been left out of that history about who we are in relation to land. Black people, Latinx folks, Asian people, brown people, Native Americans. It’s huge.