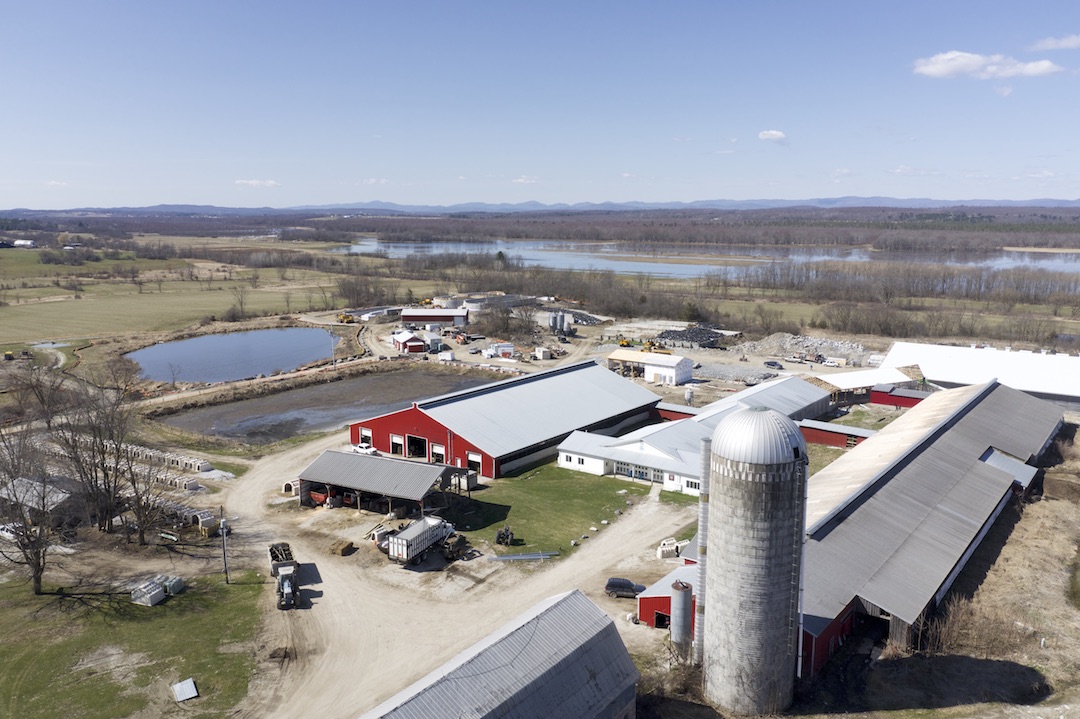 The Goodrich farm, with construction in the background.

The project will turn cow manure and food waste into renewable natural gas, which will be sold to a nearby college.

After milk prices collapsed in the wake of the 2008 financial crisis, Chase Goodrich knew his family’s Vermont dairy farm needed to diversify its revenue.

More than a decade later, construction is finally underway on the Goodrich Family Farm on an anaerobic digester that will turn cow manure and food waste into a renewable natural fuel for use by a local college and gas utility.

The project comes as dairy farmers are again struggling through a crisis in the form of the coronavirus pandemic. Goodrich is hopeful the digester will provide a small financial boost, reduce the farm’s environmental impact, and maybe offer lessons for other farmers seeking revenue from renewable gas.

Chase Goodrich’s grandfather started the farm in Salisbury, Vermont, in the 1950s. Since then, the dairy cow herd has grown from 10 to about 900. Chase Goodrich and his sister are the third generation managing the farm and began steering the operation toward renewable gas production in the wake of the 2008 financial crisis.

“I think we saw a need to definitely diversify from milk just being our only source of income,” Goodrich said.

At the same time, he added, dairy farmers had been getting negative public attention for runoff that flowed from their operations into Lake Champlain, raising the phosphorus levels in the lake and causing algal blooms and other pollution. The family hoped they could improve that image in the community.

“Today do I wonder if it was the right decision? I don’t know,” Goodrich admitted. The initiative hasn’t been an easy undertaking. At several points he wasn’t sure when or whether the project was going to happen. He had to make decisions — for example, getting all the cows under one roof to make the project viable — without the certainty that construction would start.

“It’s hard to manage this business … for something that you want to come but don’t know if it’s coming,” he said. “You’re pretty committed to it, but there were a lot of challenges to get there.” 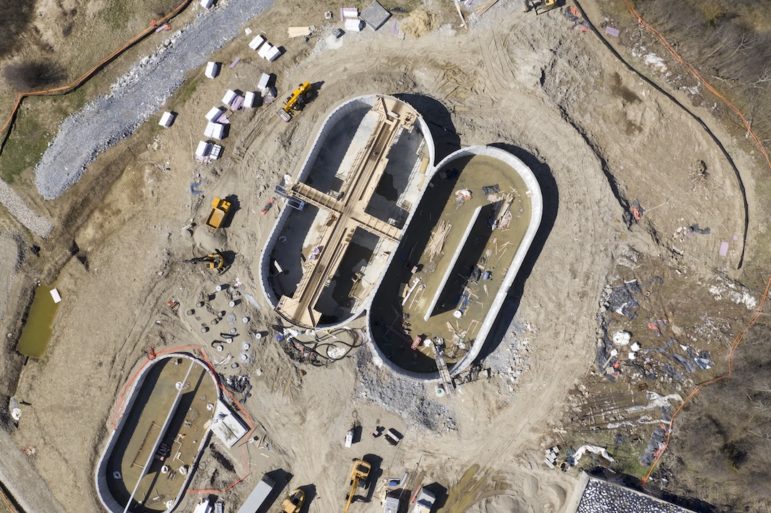 Construction on the Goodrich farm. (photo courtesy of Vanguard Renewables)

The initial project developer moved on and the farm partnered with a Massachusetts company, Vanguard Renewables, which will own and operate the digester. The Goodrich Family Farm will receive lease payments from the developer, and the fuel will be sold to nearby Middlebury College and Vermont Gas Systems, which plans to deliver some of it in the community.

The pandemic caused a slight hiccup when construction work had to stop briefly, but it’s been ramping back up with safety precautions in place. If all goes as planned, the facility will be providing gas to Middlebury by the end of the year.

In addition to the gas it produces, the digester will give Goodrich fertilizer with controllable phosphorus levels, as well as bedding for the cows. It should also help local businesses, such as breweries, dispose of their food waste, which state law prohibits from going to landfills.

The Goodrich farm has experienced about a 25% revenue reduction during the pandemic, and Goodrich said that could drop even further. Milk prices had already been on a downward trend, but they’ve dropped significantly recently, largely due to the loss of demand as schools and other large food service facilities closed.

“Do I think … ‘Oh everything’s going to be peaches and roses now that this is here?’ Absolutely not,” Goodrich said. “We’re still at the mercy of the milk market. … But I think it does help move us in the right direction for sure.” 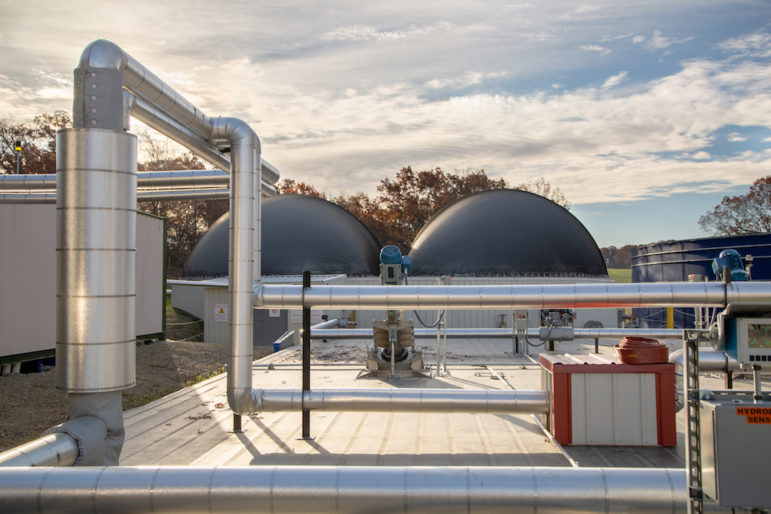 A finished anaerobic digester project at a farm in Massachusetts. (photo courtesy of Vanguard Renewables)

Interest in anaerobic digesters has been increasing among dairy farmers in recent years, said Jamie Jonker, vice president of sustainability and scientific affairs at the National Milk Producers Federation. The United States has about 200 operational dairy digesters, according to the Environmental Protection Agency. (The U.S. Department of Agriculture records about 34,000 licensed dairy farms in the country.) It’s early to tell how the pandemic might affect that interest: Some farmers might want to bring in new revenue, while others might be hesitant to take risks.

Unlike the Goodrich farm project, most farmers own their digestion facilities, Jonker said. That means they have to pay for them. He estimates that for existing projects, the cost would have averaged about $2 million to $2.5 million. Given the price, it’s often more realistic for larger farms to consider a project like this. Partnerships like the one between the Goodrich farm and Vanguard could help offset the risk, Jonker said, “with the realization that there can be financial returns.”

The milk producers association recently set a goal of achieving carbon neutrality by 2050. Projects like the one at the Goodrich farm will be important in helping farmers achieve that goal, Jonker said.

Vanguard’s leadership hopes to make an appealing case for dairy farmers. With Vanguard making the capital investment in the digester and taking responsibility for operating it once construction is complete, farmers can pursue the project with less risk, said John Hanselman, Vanguard’s chair and CEO. The company until this year worked only with dairy farms, although now Hanselman and his team have broadened to poultry farms too.

“Our great frustration is that we can’t do it at more farms more quickly,” Hanselman said. Negotiations take time, although they’ve become easier as farmers become more knowledgeable of the technology. Vanguard’s co-digestion division — which develops, owns and operates anaerobic digesters that convert both food waste and manure to renewable natural gas — currently has five facilities operating on dairy farms in Massachusetts in addition to the forthcoming one at the Goodrich farm. Another is planned for New York.

U.S. dairy farms have been “brutally impacted” by COVID-19, Hanselman said, “and they were having a hard time prior to COVID.” He hopes projects like the one at Vanguard help local farmers stay in business even during hard times like this.