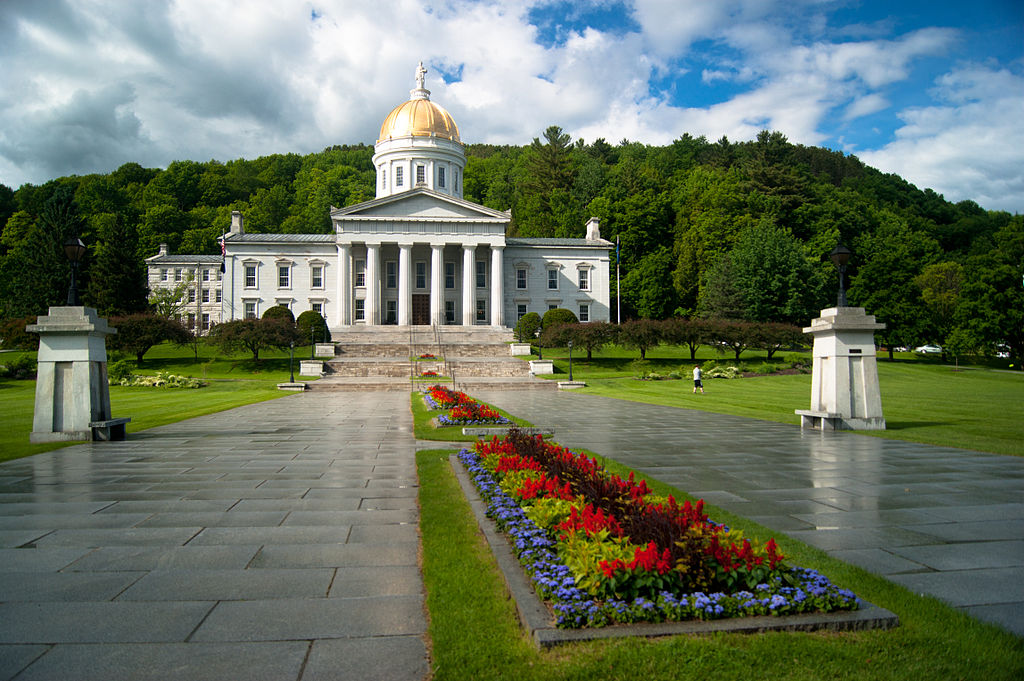 The Vermont Statehouse in Montpelier.

Vermont is adding teeth and a new task force in an effort to get the state back on track toward its climate goals after several years of stalled progress.

Vermont was an early leader on climate, adopting emission goals in 2006. After several years of progress, annual emissions increased over the last decade. In 2018, the latest year available, preliminary emissions totals were up 4% from the 1990 levels.

The state legislature passed the Global Warming Solutions Act in September after overriding a veto by Gov. Phil Scott. The new law changed Vermont’s emissions goals to requirements, allowing for legal action if state administrators fail to adopt rules that put Vermont on track to meet those requirements.

The legislation also created the Vermont Climate Council, a 23-member group charged with creating comprehensive, four-year climate plans to meet the targets, including reducing emissions 40% from 1990 levels by 2030, and 80% by 2050. The state under the law is set to achieve carbon neutrality by 2050.

Members include cabinet officials and legislative appointees from the business, utility, fuel, environmental advocacy and community development sectors. At the end of next year, the council will recommend programs and strategies to guide state policy. As in states across the nation, meeting climate targets will require significant action in the transportation and building efficiency sectors.

The council is set to submit a draft for public comment by October. It will adopt the final plan by Dec. 1, 2021. After the plan is adopted, the council will update it every four years. A similar effort is underway in Maine, where the state’s climate council recently approved its first plan.

The law also establishes four subcommittees to focus on areas of particular concern as the climate plan is developed. Those subcommittees will focus on addressing rural community issues; studying natural land initiatives like carbon sequestration; ensuring the plan’s strategies and programs are cost-effective; and ensuring the strategies are equitable.

Supporters and council members hope that through the group’s work, the state will get back on track and boost its economy with jobs and more in-state spending.

The law “speaks to the legislature saying we’re not moving fast enough under this administration,” said Chad Farrell, founder and CEO of Encore Renewable Energy, a Burlington-based developer. He’s a member of the council representing the clean energy sector. “The renewable energy services industry here in Vermont is suffering right now,” he said. “We need some better policy.”

Gov. Scott has implemented new electric vehicle incentives, but Farrell said recent cuts to net metering have made it harder for new solar projects to be deployed, especially as federal incentives have declined. New project development has dwindled over the last two years, he said, despite a ramp-up in development in the years prior.

“Our response to the climate crisis represents the single greatest economic opportunity of the 21st century,” Farrell said. “This governor ran on economic development,” he said. “He’s a business guy himself. He gets it.”

“Incremental action is going to have serious consequences down the road,” said Johanna Miller, energy and climate program director at the Vermont Natural Resources Council, who’s also a member of the climate council. She noted that the governor took strong action, based in science, responding to the pandemic, and she’d like to see a similar large-scale commitment to mitigating climate change. “I’ve not seen big, significant proactive solutions come out … but we need to have those kinds of creative solutions at a scale that we have not had to date.”

“It’s an urgent matter, and so, understandably, there are folks who want to see big solutions because it’s a big problem,” said June Tierney, commissioner of the Department of Public Service and one of the executive branch members of the council. “But the governor has been very clear that what he is intent on is pragmatic solutions that can be done and that have measurable outcomes.” Those solutions will add up, she said.

Tierney added that net metering, for example, was meant to drive solar adoption. The administration felt that after about a decade, it’s done that, and it’s now time to allocate scarce resources to other needs.

She acknowledged others may disagree, but she said one of the benefits of this council is that it brings together 23 people with different views who will have to collaborate. From her perspective, much focus has centered on renewable energy at the expense of the transportation and heating sectors. In her opinion, one of the strongest opportunities lies in expanded broadband access, which will allow for more remote work, even after the pandemic, hopefully reducing the number of cars on the road.

Gov. Scott opposed the law that established the council, saying it was an “unconstitutional usurpation” of executive authority by the legislature. He also said the emissions timelines are unrealistic and will lead to lawsuits when they’re not met.

Lawyers, including the state’s attorney general, have said the law is constitutional, but the Scott administration hasn’t backed down from its claims. Susanne Young, the governor-appointed Secretary of Administration and the council’s chair, addressed the dispute briefly at the council’s first meeting on Nov. 20.

“The fear is that if we continue to work with this particular framework to achieve the goals that we all clearly agree we need to achieve, we need to continue to work with the legislature to help us solve some of the issues that I believe and the administration believes could make your good work vulnerable to a challenge at the end of the day,” Young said at the meeting.

Tierney said that whether or not the administration questions the legality of the law, the work will still proceed. “We have to assume the legality of the legislation for the purpose of acting on it” until it’s shown to be unconstitutional, she said, adding that she’s aware of no legal challenges currently.

“I am hopeful the work of the council will get us back on a track to meeting our commitments and do so in a way that increases our climate resilience, do so in a way that enables every Vermonter, particularly those in households with low incomes, to participate equitably, which is another area where we’ve fallen behind,” said Renewable Energy Vermont Executive Director Olivia Campbell Andersen, who doesn’t sit on the council.

“I think this framework and this council and the accountability it creates are completely necessary, but we still have to keep moving forward, and we can’t let a longer term process delay progress that can be started next year,” she said. “You can’t miraculously get 20% pollution reduction in a year or two timeframe.”

“It’s not as though technologies don’t exist to address much of these challenges,” she continued. For example, things like all-wheel-drive electric vehicles — which will be important for Vermonters who rely on cars — will increase in availability in the coming years, she noted. “So it’s really not a matter of technologies being unavailable. It’s just a matter of political will.”