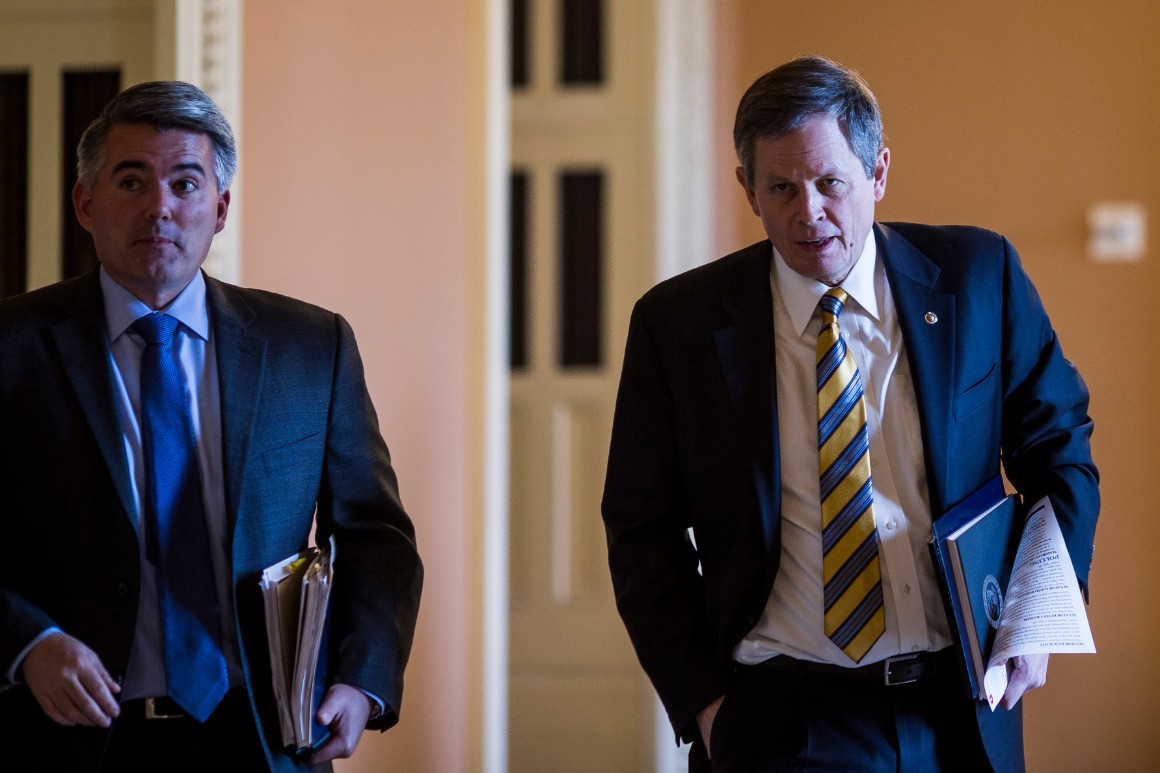 President Donald Trump has put a trio of western Republicans facing tough reelections in a tight spot with his controversial nominee for the Bureau of Land Management — potentially dimming Republicans’ chances of keeping control of the Senate.

By nominating William Perry Pendley to be director of the agency, Trump has forced three vulnerable GOP incumbents — Sens. Steve Daines of Montana, Cory Gardner of Colorado and Martha McSally of Arizona — to either defy the White House and oppose Pendley, or support him and risk throwing away any political benefit they got from passing the Great American Outdoors Act, H.R. 1957 (116), by installing someone to oversee the nation’s public lands who spent decades advocating to sell them off.

Democrats, who are unified in their opposition to Pendley’s nomination, are eagerly pointing out Republicans’ predicament.

“Everything they gain from being part of the Great American Outdoors Act, all of that goodwill will go out the window if they support this nominee,” Sen. Martin Heinrich (D-N.M.), a member of the Energy and Natural Resources Committee, told POLITICO.

“In any western state that has substantial public land, this is a resonant issue that can make a difference,” he said, adding, “I think it would be very wise for any senator — from the West in particular — to really think hard about whether they can support this nominee.”

Republicans currently hold sway in the Senate with 53 seats, but as Trump’s poll numbers slump because of the chaotic White House response to addressing the coronavirus pandemic, Democrats are hoping to pick up enough seats in November to claim the majority.

Pendley, who became deputy director for policy and programs at BLM last year under a secretarial order, has been among the most controversial appointees at Interior since he has in the past called for selling off federal lands, referred to undocumented immigrants as cancer and dismissed the Black Lives Matter movement as based on “a lie.” Pendley also leads the department as it completes its controversial reorganization that moved its headquarters to Grand Junction, Colo., a push led by Gardner.

Pendley has stayed in the role atop BLM, exercising the authority of the director, through a series of reappointments and an updated succession order — which are the subject of a lawsuit filed by two environmental groups. He was not formally nominated to be permanent head of the agency until late last month. He previously served as president of the conservative Mountain States Legal Foundation and worked at Interior during the Reagan administration.

Gardner, Daines and McSally all sit on the Energy Committee, which will consider Pendley’s nomination. Their votes will be decisive on the panel, which has 11 Republicans and nine Democrats. Chair Lisa Murkowski (R-Alaska) has not scheduled a hearing to date but promised a “thorough but fair process” for Pendley.

POLITICO reached out to all of the Republican senators on the Energy Committee, but only two — Sens. John Barrasso of Wyoming and Mike Lee of Utah — committed to supporting the nominee ahead of a hearing.

Gardner told a Colorado radio station he would have “some very tough questions” for Pendley at his confirmation hearing, but has remained noncommittal on whether he would support the nomination. A spokesperson for Daines declined comment, though the Montana Republican’s office said in 2019 he would “most likely” support Pendley. McSally’s office did not respond to multiple requests for comment.

Gardner has highlighted public lands repeatedly as a key part of his reelection pitch, recently releasing an ad touting his bipartisan efforts to get the Great American Outdoors Act passed. But Hickenlooper said a vote on Pendley would undermine that.

“Cory Gardner will champion the [Great American Outdoors Act] that he, along with many other people, helped pass and he won’t say a word against someone like William Perry Pendley, who by almost every indication doesn’t really believe in public lands,” Hickenlooper told POLITICO.

The Great American Outdoors Act would permanently provide $900 million in annual appropriations to the Land and Water Conservation Fund and offer billions to address the deferred maintenance backlog on the nation’s public lands. The legislation passed the Senate last month and the House is expected to take it up next week.

Pendley’s selection means Gardner must either vote against the person who led BLM’s relocation to Colorado — another frequently cited accomplishment in his reelection pitch — or threaten to undo whatever support he earned through passage of the conservation package. However, observers don’t really see public lands as a likely top voting issues for Coloradans, with voters’ views of Trump, health care or the economy taking priority.

Earlier this week, the editorial board of the Grand Junction Daily Sentinel — the newspaper in the Colorado city that is home to BLM’s new headquarters and which previously indicated it would support Pendley as BLM head — changed course and opposed his nomination, citing his views on the Black Lives Matter movement.

Pendley “is the last person who should be criticizing other movements given the incredible pass he’s received thus far over what many consider disqualifying positions on public lands policy,” the board wrote.

The Interior Department defended Pendley’s “wealth of experience” and said he remains dedicated to “carrying out the Administration’s priorities,” noting its completed purchases of 25,000 acres of land and recreational access to lands during his tenure.

“He also has vigorously championed BLM’s diverse portfolio of land uses, whether recreational, commercial or conservation, and supported the dedicated career BLM professionals who work diligently to accomplish the agency’s work across the nation,” a spokesperson said in a statement.

But making the nomination so close to the election struck some observers as a strategic mistake, though they welcome the scrutiny it will place on the nominee.

“Why now? It’s been a year,” said Land Tawney, the president and CEO of Backcountry Hunters and Anglers, a Montana-based conservation group. “We’ve got one of the biggest pieces of legislation in my lifetime, of our lifetime, moving forward for public lands right now. So, the juxtaposition feels really weird.”

Democrats are eager to force the Republicans to show their hand on Pendley, and have made the unusual request for the chamber to speed up its process. Sen. Jon Tester (D-Mont.) wrote Trump asking the nomination be expedited to allow for a confirmation hearing prior to a monthlong Senate recess in August.

“We were surprised that [the administration] wanted the debate so close to an election,” a Tester aide said. “It makes for one heck of a vote-counting exercise.”

Aaron Murphy, a former chief of staff to Tester and the executive director of the Montana Conservation Voters, which has endorsed Bullock, called the passage of the Great American Outdoors Act a win for Daines, but cautioned that a vote in favor of Pendley would undercut it.

“If you want to be a conservation champion, you’ve got to be bold and courageous and can’t just do one token bill and call yourself a conservationist,” Murphy said. “It doesn’t work that way.”

Eighty-seven percent of Montana voters said public lands issues would be a key issue in who they would support in 2020 elections, according to June polling conducted for the Center for Western Priorities.

“Access to public lands has become the third rail of Montana politics,” said Barrett Kaiser, a Montana Democratic strategist who works regularly on public lands issues and is unaffiliated with the Bullock campaign. “Daines has to be very frustrated with this White House for putting Pendley up.”

For Bullock, Pendley’s nomination reignites a fight from two decades ago in which the BLM nominee headed a group seeking to roll back Montana’s stream access laws.

“Pendley wanted to restrict access to our public lands to a wealthy few, but we prevailed in that action and ensured that our rivers and streams belonged to all Montanans,” Bullock said in a statement.

A spokesperson for Kelly, Jacob Peters, said in a statement the Arizona Democrat has “concerns about Pendley’s nomination and what it could mean for the future of Arizona’s public lands,” expressing particular concern that confirmation could open the door to uranium mining near the Grand Canyon.

Choosing to move forward with the nomination now has left observers in both parties scratching their heads.

Carl Tobias, a law professor at the University of Richmond who tracks the presidential nomination and confirmation process, cautioned that the politics of the vote remain difficult, particularly given the timing of the lands bill. But he was puzzled as to why the White House moved forward with the nomination now.

“He can get everything he wants from the nominee in the next four months, though it just seems like an unforced error that didn’t need to happen and puts some of the senators in a difficult position,” he added.