Trump’s California criticism and anti-green energy message is likely to be a steady refrain during this week’s RNC convention. | Chris Carlson-Pool/Getty Images

The forced blackouts during California’s record-setting heatwave have handed President Donald Trump a cudgel to attack the state’s aggressive climate change policies — and tie them to Joe Biden’s plans for a massive expansion of wind and solar power.

Trump has frequently derided green energy as unreliable and dangerous — once even falsely suggesting that wind turbines cause cancer — as he has pushed to grow coal, oil and natural gas output. Though California officials say the blackouts just over a week ago were mostly due to plant outages, reduced power shipments from other states and weak wind output rather than problems strictly from renewable power, the outages gave Trump a crisis he can blame on the deep-blue state that he has feuded with throughout his first term.

“He’s countering the Biden climate message as well as he can,” said George David Banks, a former White House energy and environment adviser. “The president likes to keep things very concise, very simple, simply because if you have a very short sound bite and you repeat it over and over and over again, it’s a much more effective communication tool.”

Trump’s California criticism and anti-green energy message is likely to be a steady refrain during this week’s RNC convention as the president tries to cut into his Democratic challenger’s lead in the polls, particularly in the crucial swing state of Pennsylvania. Trump narrowly won the state in 2016, but the latest surveys show Biden up by more than five points in the race for the state’s 20 electoral votes.

Biden has said fighting climate change would be among his top priorities, and he included it alongside the pandemic, the recession and racial strife as one of the greatest problems facing the country in his speech last week at the Democratic National Convention. For Trump, that offers an opening to attack his opponent by disparaging green energy.

“You have senior citizens forced to sit in their homes with no air conditioning in the middle of the summer,” Trump said in a stump speech on Thursday in Old Forge, Pa. “And Biden wants to eliminate power plants all over.”

State power grid operators shut off power for hundreds of thousands of Californians during the heat wave that hit the West earlier this month and contributed to the massive number of wildfires that have consumed more than a million acres, triggering an emergency declaration. Scientists warn that climate change will make the type of hot weather — which boosted temperatures in Death Valley to a record 130 degrees Fahrenheit — increasingly common in the coming years.

But Trump has relished attacking Democrats over their efforts to eliminate greenhouse gas emissions from the nation’s electricity sector. Last year, as the Senate voted down the “Green New Deal” resolution that called for rapidly transforming the U.S. economy to fight climate change, Sen. Lindsey Graham told reporters that Trump instructed Republicans to “make sure you don’t kill it too much because I want to run against it.”

Trump’s Pennsylvania speech came a day after he tweeted that “Democrats have intentionally implemented rolling blackouts — forcing Americans in the dark,” a remark that was incorrect since the state’s decision to implement the power outages was made by managers at the state’s power grid operator rather than elected officials.

Trump has regularly taken credit for a surge in oil and gas production that has made the U.S. the leading global producer of those energy sources, although their output growth started over a decade ago during the George W. Bush presidency. Still, the pro-fossil fuel message is designed to appeal to thousands of natural gas industry workers in places where Trump needs to draw support.

The Trump campaign did not respond to a request for comment, but a former administration official suggested that focusing on Biden’s tepid acceptance of fracking technology may get traction.

“Pointing to power outages in California as a way of savaging the Green New Deal works at a general political level, more as a red-meat message to motivate the base,” the person said. “But I suspect the campaign will be much more focused on the fracking message, which is very directly and specifically tied to real people, and real jobs, in several key states, most notably Pennsylvania.”

The Biden campaign isn’t backing away from its support for renewable energy, and instead slammed the president for turning California’s blackouts and wildfires into political ammunition.

“Californians are wrestling with a devastating storm of crises from the destructive wildfires to a historic heatwave to the raging pandemic,” said Matt Hill, a spokesperson for the Biden campaign. “They deserve and need presidential leadership, not a political tweetstorm.” 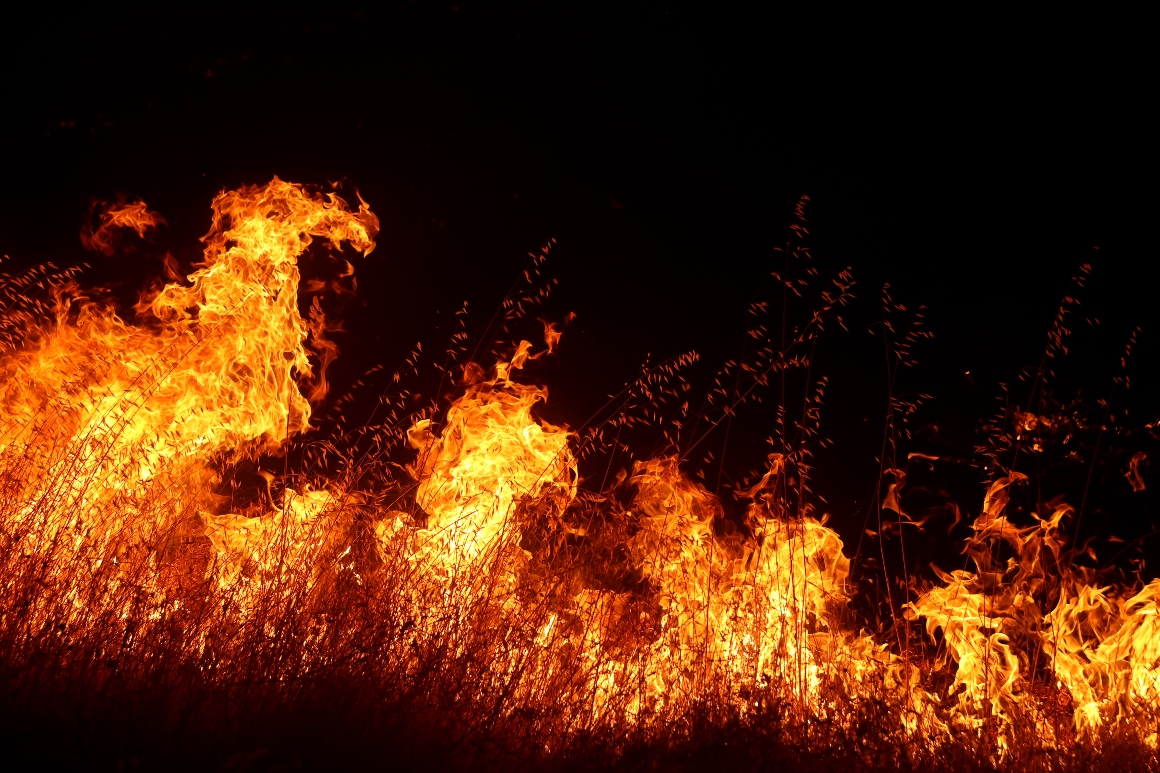 Flames burn through dry grass as the LNU Lightning Complex fire moves through the area on Aug. 19, 2020 in Winters, Calif. | Justin Sullivan/Getty Images

At a briefing in Napa County on Friday, California Gov. Gavin Newsom told reporters the state would not back down from its clean energy strategy.

“We are going to radically change the way we produce and consume energy for one reason: we believe in climate change, we believe in science. The last thing we need to do is double down on a future that actually created the conditions that we are trying to address here today,” he said.

The rolling blackouts were California’s first since 2001, when they occurred under more nefarious circumstances. Back then, the state grid was disrupted by Enron and other traders who manipulated the state’s newly deregulated energy market, forcing shutoffs even when the state wasn’t experiencing a record heat wave. The state’s energy crisis badly damaged then-Gov. Gray Davis, who held on to win reelection a year later but could not survive a recall election in 2003 that swept in Arnold Schwarzenegger.

Trump’s attacks on renewable energy may resonate with people who work in the fossil fuel industry, but polls show solar and wind power enjoy broad support across the country. That’s the message that clean energy advocates in California have been pushing to help spread deployment of the technologies.

Bernadette Del Chiaro, executive director of the California Solar and Storage Association, said rooftop solar is more popular in “deep, deep red portions of California” than in liberal areas of the state.

“It is a trans-partisan, nonpartisan, no-brainer technology that Californians just get, whether you’re a walnut farmer in the Central Valley or a software developer in San Francisco. It just makes sense. It’s not about our national ping-pong, political games with DC,” Del Chiaro said.

Many other blue states are aiming to follow in California’s path to fight climate change by reducing the carbon dioxide emissions from their power plants, and the heatwave and wildfires in the state are only reinforcing that need to take aggressive action, according to proponents like Cheryl LaFleur, who served on the Federal Energy Regulatory Commission from 2010 to 2019.

“California is on the cutting edge of climate change,” she said, and not just because of its technological innovations, but also the state’s spate of climate-aggravated disasters in recent years ranging from wildfires and drought to flooding and mudslides.

“I would have a great degree of confidence that they’re not going to take away the lesson from this as ‘we won’t think about climate change anymore.’ That would be the very wrong lesson to go off,” she added.

LaFleur, who helped oversee the development of California’s energy market, also lamented “the rush to diagnose what’s going on. It’s a little bit like a Rorschach test: Everyone looks at it and sees what they want to see.”

Steve Berberich, who heads the California grid operator that manages most of the state’s electric infrastructure, said repeatedly last week that increasing amounts of clean energy were not to blame for the rolling blackouts.

“The renewables are really not a factor,” he said, and he called for “an overbuild of renewables and a fairly extensive deployment of batteries” to tap California’s solar power during the day so it can be used more at night when the sun isn’t shining.

That’s not likely to change Trump’s attacks on the state as the campaign enters the final months, especially if they begin to resonate with voters.

“[Trump] is very big into, ‘How does the audience react to what I say?'” Banks said. “If he gets a big response to the audience, he’ll bring it up in more than just fossil fuel energy states.”