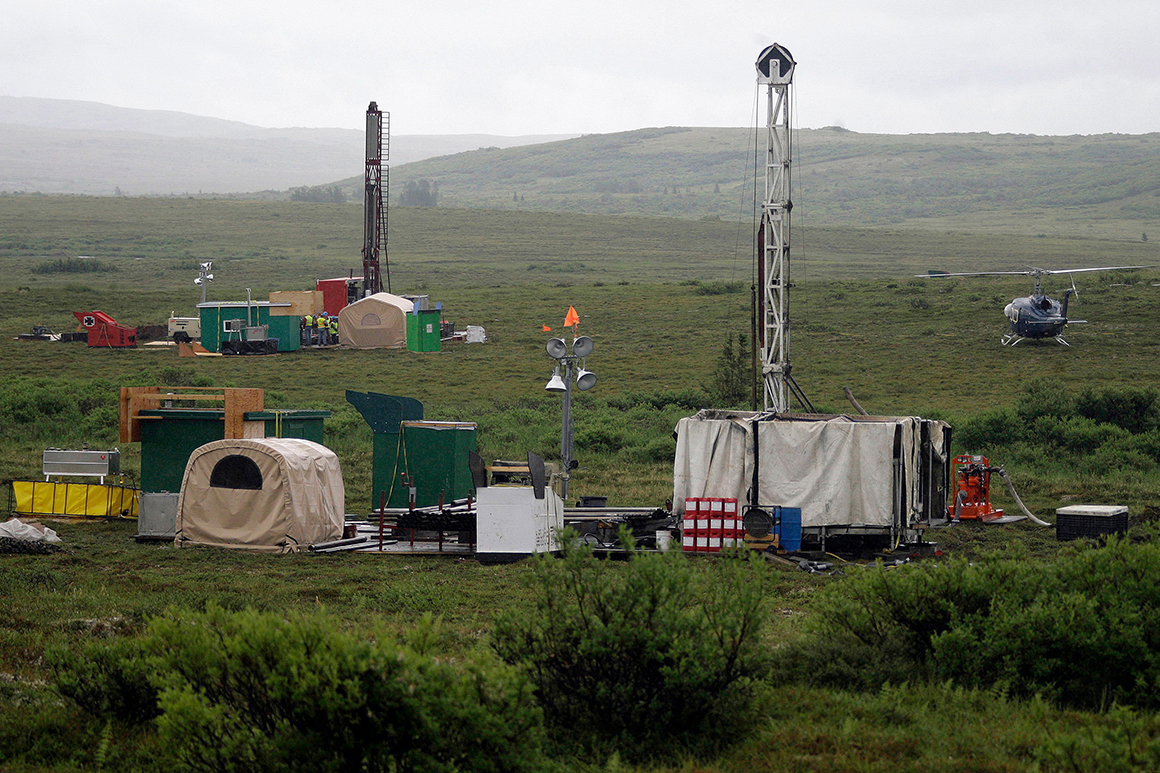 Workers with the Pebble Mine project test drill in the Bristol Bay region of Alaska, near the village of Iliamma, in July 2007. | Al Grillo/AP Photo

The Trump administration is planning to block the proposed Pebble Mine in Alaska early next week, six people familiar with the plans told POLITICO, marking a surprise reversal that could be the death knell for the massive copper and gold project.

Environmentalists and conservation groups have warned that the project would threaten world’s largest sockeye salmon fishery, and the move to block it comes after President Donald Trump faced pressure to nix it from an array of interests, including GOP mega-donor Andy Sabin, Bass Pro Shops CEO Johnny Morris and the his eldest son, Donald Trump, Jr.

“With any government, whether it be Obama or Trump, nothing is certain until it happens and that’s just the nature of this beast,” Sabin, who has spoken directly with Trump about the proposed mine, told POLITICO. “But I’m fairly certain that you’re going to get good news.”

The Army Corps of Engineers office in Alaska is planning to hold a conference call on Monday with groups connected to the proposed mine discuss the decision, three people with knowledge of the call told POLITICO. An administration official confirmed the call with POLITICO.

Corps officials will say outstanding technical issues with a key permit remain, the people said, adding they anticipate Trump will then follow with a public statement opposing the project. The people said they’re not entirely sure what form Trump’s disavowal will take, although they said it is more likely to come as a rejection of the Army Corps of Pebble’s water permits rather than a veto from EPA, which earlier this year indicated it would not exercise that power.

“There are people that have been told there will be a [Corps] press event and that it will be positive,” said a Washington-based person who works on efforts opposing the mine and who requested anonymity to discuss sensitive conversations.

“The White House is not in a position to comment at this time,” he said in an email. Neither the Army Corps nor EPA immediately responded to requests for comment.

But Pebble Partnership CEO Tom Collier, who worked as chief of staff for Clinton-era Interior Secretary Bruce Babbitt, denied that the project was about to be blocked.

“I do not believe he will be returning to Obama-like interference in the permitting process. We have those assurances that he will not do so,” he added.

Collier also said he has no knowledge of a Monday conference call. “I think if there was a stakeholder call for Monday that Mr. Sabin knew about, I’d know about it, and I don’t.”

The Pebble Mine has been planned to be built in the headwaters for Bristol Bay, home of the world’s biggest sockeye fishery which provides up to 11 percent of all wild salmon harvests.

“I have been there more than 10 times. It is like no place on Earth,” Trout Unlimited CEO Chris Wood told POLITICO.

The about-face by the administration likely signals more about issues with this specific mine than a sea change in Trump’s overall support for big development projects. But with Trump expected to let it die and his White House challenger Democrat Joe Biden opposed to the project, Pebble Mine appears to have few options to advance it despite more than a decade of planning, ownership changes and political fights.

At the end of July, Trump’s administration appeared to be on track to approve the project as early as this month over the protests of environmentalists and Alaskan Native groups opposed to the 8,400-acre open pit mine.

Then in early August, Trump signed the Great American Outdoors Act, which secured almost $1 billion a year for conservation work. “There hasn’t been anything like this since Teddy Roosevelt, I suspect,” Trump said. Later that day, Trump’s son Donald Jr. publicly raised the issue of the controversial mine project, tweeting along with Nick Ayers, former chief of staff to Vice President Mike Pence, to urge Trump to reject Pebble.

The duo cited outdoors recreation groups’ concerns that it threatens the Bristol Bay salmon fishery, which is commercially important and an increasingly popular destination for adventurous anglers.

Joining the hook-and-bullet crowd’s influence campaign was Fox News host Tucker Carlson, one of the president’s favorite TV personalities who elevated the matter in an Aug. 14 segment called “The Case Against Alaska’s Pebble Mine.” Carlson and his guest, Bass Pro Shops founder Morris, invoked Theodore Roosevelt, who Trump had just called “truly the great conservation President” — and who he’s suggested he should join on Mount Rushmore.

Trump has been unabashedly pro-mining, though that has been largely focused on coal mining; Pebble would mine a large deposit of copper, gold, molybdenum and silver ore, so it has no direct connection to the issue of climate change.

“Maybe not all environmentalism is about climate,” Carlson said on his show.

Long-held skepticism about the mine from many Alaskans should also provide Trump some political cover. The late Republican Sen. Ted Stevens in 2008 famously called it “the wrong mine for the wrong place.” And while she has yet to ultimately take a side, Senate Energy and Natural Resources Chair Lisa Murkowski (R-Alaska) in 2019 questioned Pebble’s environmental impacts.

Shortly after the Trump administration took office, it settled a lawsuit with the mine’s developer that included withdrawing the Obama-era proposal to preemptively veto the mine. Instead, the mine would be allowed to continue through the permitting process at the Army Corps of Engineers.

As a consulting agency, EPA last year was critical of the Corps’ environmental study, warning of “substantial and unacceptable adverse impacts” on the fisheries. But EPA in May indicated it was backing off those criticisms and would not use its Clean Water Act power to veto the project’s permits.

EPA’s criticisms were based on unique characteristics that ultimately managed to bring environmentalists and Trump to the same side.

The mine, being developed by a U.S. subsidiary of the Canadian company Northern Dynasty Minerals, was proposed to tap a huge reserve on state land a few miles north of Iliamna Lake. The mine plan calls for producing an average of 70 million tons of copper, gold and molybdenum ore annually over 20 years, amounts worth potentially hundreds of billions of dollars. The mine’s opponents argue the company would eventually push to expand the mine to extract even more of the deposit.

The Corps determined in July that Pebble Mine “would not be expected to have a measurable effect on fish numbers and result in long-term changes to the health of the commercial fisheries in Bristol Bay.”

But the commercial fishing industry, recreation groups, environmentalists and local Native Alaskan groups have all long complained about the destruction of streams critical to salmon’s procreation and the danger of mining waste contaminating the bay.