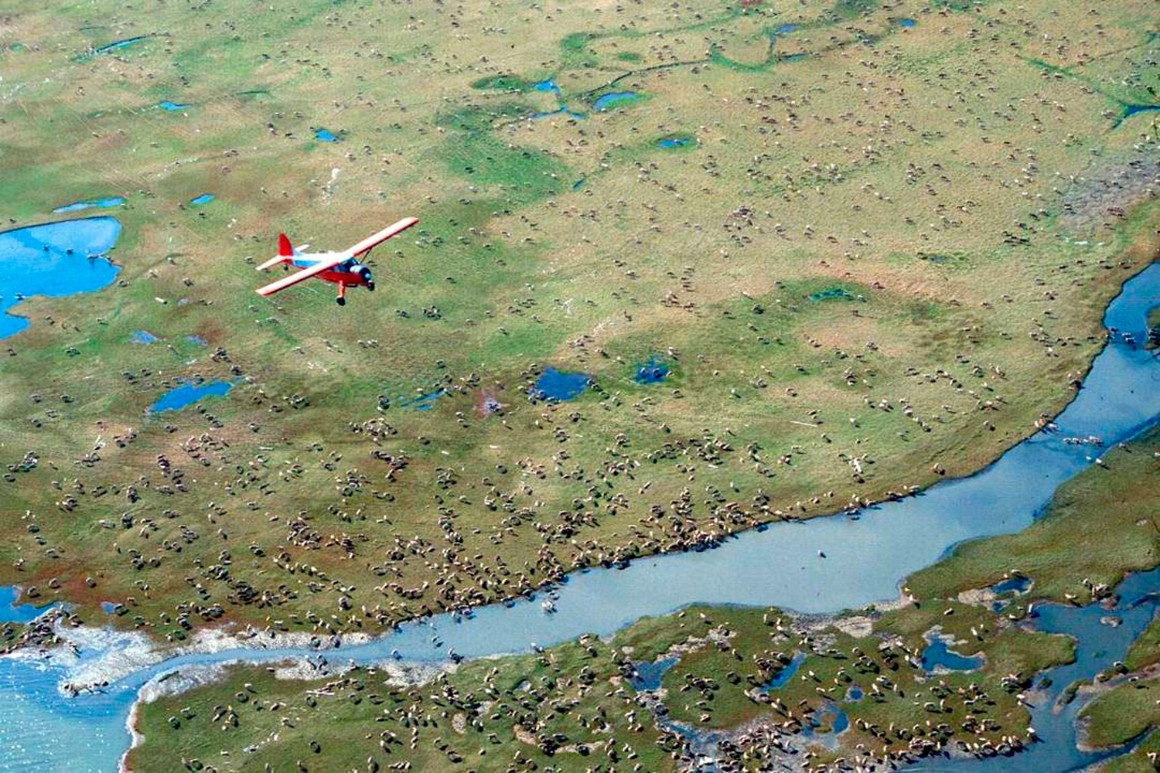 An airplane flies over caribou on the coastal plain of the Arctic National Wildlife Refuge in northeast Alaska. | U.S. Fish and Wildlife Service via AP

The Trump administration said on Monday it has officially approved a plan to open a pristine Arctic wildlife refuge in Alaska for oil drilling, an effort that has enraged environmental groups who say the work will threaten polar bears and herds of caribou in the region.

The plan has been in the works since Congress mandated in its 2017 tax bill that the Interior Department must auction off drilling leases in the Arctic National Wildlife Refuge.

“I do believe that there certainly could be a lease sale by the end of the year,” Interior Secretary David Bernhardt told reporters on a conference call.

Many oil companies have sought access to ANWR for years, but the official decision to open it comes at a time when few in the industry are expected to take a risk on unexplored properties with little data on the oil resources beneath the surface. But Bernhardt said despite the absence of seismic data that companies use to map out oil reservoirs before drilling, he expected interest to be strong.

“I think a lot of people will bid without seismic data,” he told reporters.

President Donald Trump, who has previously boasted about opening ANWR, indicated in an interview early Monday that no final decision had been made on opening the area.

Bernhardt declined to comment on Trump’s comments, saying, “I’m not aware of what the President specifically said.”

Oil companies have been leaving Alaska because of the high cost of drilling and shipping oil from such a remote area compared to the relatively quick and cheap oil wells they can drill in Texas, North Dakota and other states already equipped with pipelines. British oil giant BP last month completed a sale of its extensive Alaska operations to the smaller Hilcorp, and ConocoPhillips remains one of the only major oil companies still drilling in Alaska.

Environmental groups also said tapping the resources from the area will exacerbate climate change in a region that is already seeing a loss of permafrost and, in some cases, villages on the coastline in danger of sliding into the sea.

“This plan will not only harm caribou, polar bears, and other wildlife, it is foolish in the face of rapidly advancing climate change,” said Center for Western Priorities Executive Director Jennifer Rokala. “Oil companies will have to harden their infrastructure to withstand melting permafrost and rising seas, leading to an even greater impact.”

A number of major global banks, including JPMorgan Chase, Wells Fargo, Morgan Stanley, Citigroup and Goldman Sachs, have said they won’t provide financing for drilling in ANWR. Environmental activists have suggested the reputational risks to companies operating in ANWR would be severe.

Those announcements from the banks have prompted the Trump administration to explore whether they were discriminating against the project, which was first reported by POLITICO.