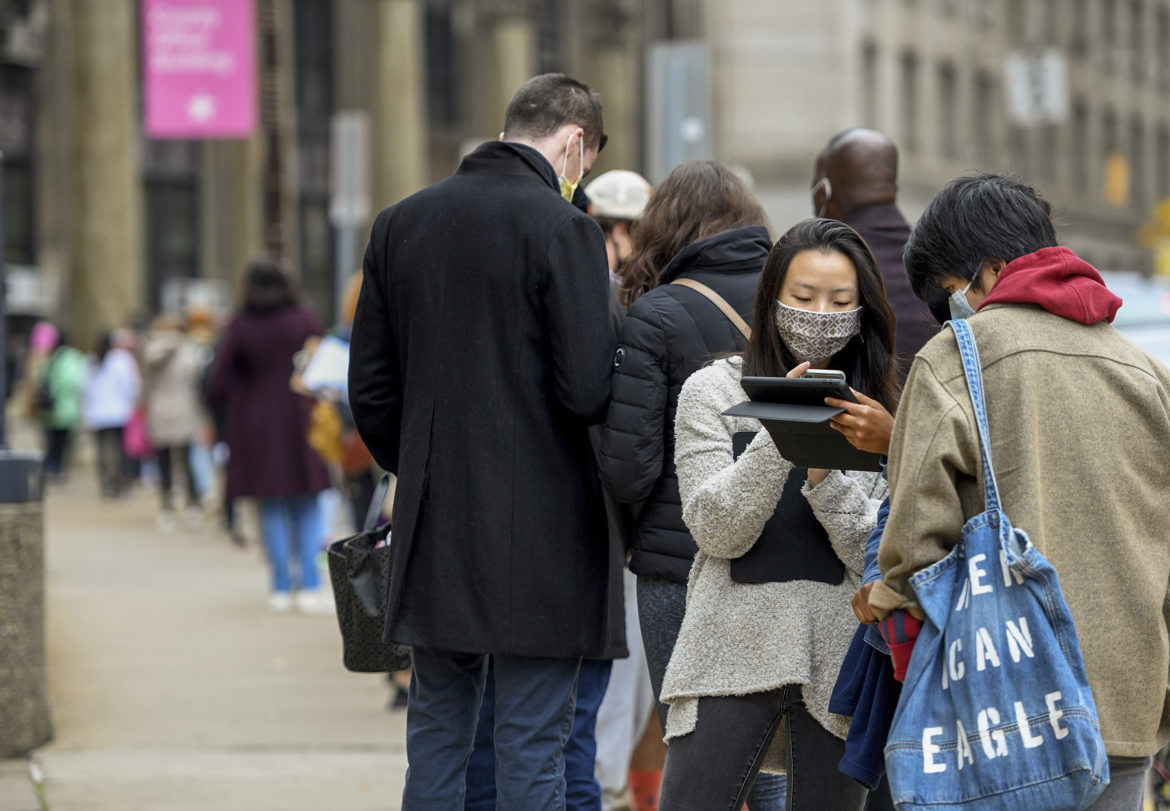 People wait in line to apply for mail-in or absentee ballots at the County Office Building Tuesday, Oct. 27, 2020, in Pittsburgh.

The battleground states of Minnesota, Pennsylvania and North Carolina could be pivotal in determining who occupies the White House in 2021.

The pace of the transition away from fossil fuels in all three states is also on the ballot tomorrow with Democrats vying for party control of state government. Enough wins could give Democrats control of governorships and state legislatures, and a clearer path for more aggressive carbon emissions reductions in energy and transportation.

In Minnesota, Republicans have a two-seat majority in the Senate. In Pennsylvania and North Carolina, the GOP has larger majorities in both the House and Senate.

Related coverage:
» With campaign cash, Duke Energy weighs in on close N.C. legislative races
» Tight down-ballot races could decide North Carolina’s energy policy future
» As policing and pandemic dominate election, climate pushed to back burner
» As costs rack up in Boulder’s push to split with Xcel, voters to have the final say

While Democratic presidential nominee Joe Biden has pledged to eliminate carbon from the power sector by 2035, whether and how he could do so remains unclear, even if Democrats take control of the Senate. That could put the spotlight on state action on low-carbon targets.

In each of the three states, all but a couple of polls during the past week show Biden leading the race for the White House, according to FiveThirtyEight.

To be sure, a Democratic trifecta in state government doesn’t guarantee action. Illinois, where Gov. J.B. Pritzker (D) took office in 2019, is an example. The General Assembly there is solidly blue, yet the state has done little on energy policy since Pritzker took office.

Still, the stakes are high, especially in a state such as Pennsylvania, a big energy producer and consumer.

“If you could flip both the House and the Senate, it could be a big deal for Pennsylvania energy policy,” said University of Michigan environmental policy expert Barry Rabe. “It could be one of the most major state shifts anywhere in the United States.”

If successful, Democrats could pursue comprehensive climate change legislation on par with Virginia’s landmark Clean Economy Act, which was passed after the Legislature flipped in 2019 and required net-zero carbon emissions by 2045, analysts say.

A more modest goal is ramping up renewable energy standards. Pennsylvania’s Alternative Energy Portfolio Standards Act, first passed in 2004, expires next year, and Democrats will likely seek ways to increase the percentage of renewable generation it mandates. Currently, the law requires less than 10% of power purchased from Pennsylvania’s energy utilities to come from solar.

The renewable portfolio standard also includes requirements from resources such as converted coal waste and methane processed from landfills, which have lost popularity over the last decade.

Two bills — one promoting electric vehicle infrastructure, the other community solar — that have been languishing in committee would likely progress with ease under a Democratic majority. But David Masur, executive director of PennEnvironment, said those bills were written to garner bipartisan support. If Democrats control both chambers, they would likely push for stronger legislation.

“It’s possible they could get it done in the lame-duck session, but I wouldn’t bet $50 on it,” he said.

Democratic Pennsylvania state Rep. Greg Vitali, minority chair of the House Environmental Resources and Energy Committee, said that in addition to climate-related actions, he would like to see energy efficiency standards — which currently apply to electric distribution companies — extended to the gas sector, and a strengthening of the state’s Department of Environmental Protection.

“A lot will depend on the margin of our majority because some House Democrats represent the oil and gas regions,” he said. “If we have a bare majority, they would not be supportive of certain environmental actions important to me.”

Tom Pyle, president of the Institute for Energy Research, said a Democratic majority would be “bad all around for Pennsylvania.”

“The voters in Pennsylvania won’t have the protection of their Legislature as a check on their governor with respect to [the Regional Greenhouse Gas Initiative],” he said.

“You could see a potential replay of what happened in Virginia, where they would ramp up green energy mandates, which will saddle Pennsylvania residents and businesses with higher energy costs right at a time where their natural gas industry is luring manufacturing back to the state,” Pyle said.

Terry Madonna, who runs the Franklin & Marshall College poll, said it’s unlikely Democrats will take the state Senate, but the House could be a close race. Two years ago, Democrats picked up 11 House seats from the Philadelphia suburbs. This time around, they would need nine.

“The suburbs are undergoing a major transition,” he said. “I don’t doubt they are going to pick up [Democratic] seats; the question is if they get to nine.”

Perhaps the easiest road to a Democratic trifecta in any state is Minnesota, which has the only split Legislature in the United States. There, the Democratic-Farmer-Labor (DFL) Party needs to pick up just two seats in the Senate to capture a majority.

In an interview a week before Election Day, Todd Rapp, a political affairs consultant who previously worked in the DFL Party and in government relations for utility giant Xcel Energy Inc., said control of the Senate is neck and neck and will likely depend on how well Biden and Trump do.

“There’s no question the Minnesota Senate is pretty much a coin flip right now,” he said.

Rapp noted that control of Minnesota’s Legislature has been divided for 28 of the last 30 years, and during that time, it didn’t let gridlock get in the way of passing landmark energy and climate legislation, most notably the 2007 Next Generation Energy Act.

But today, there’s new pressure for different climate policies that would take Minnesota the next step toward decarbonizing its power system.

“We’re kind of entering a new period,” Rapp said. While many Republicans and Democrats alike, as well as utilities, recognize a need to shift away from fossil fuels to cleaner energy sources, there’s less agreement on how — and how fast — to achieve that transition.

“That debate right now is about the speed of change,” he said.

Democratic Gov. Tim Walz last year proposed a three-pronged energy plan that included a 100% clean energy standard by 2050. The plan also featured a “Clean Energy First” requirement that utilities prioritize use of carbon-free energy over fossil fuels, and it would bolster energy efficiency efforts in Minnesota.

While there seemed to be general support for the latter two pillars of Walz’s energy proposal, the 100% mandate was a non-starter for the GOP-led Senate.

So far, no Midwestern state has joined the list of states to have adopted a 100% clean energy requirement.

“Because of the split Legislature, we’ve seen that clean energy proposals have had to navigate that bipartisan window,” said Gabe Chan, an assistant professor at the University of Minnesota. But, he added, “[Democrats] are clear that they support that 100% clean energy mandate, and that’s where they are going.”

The CEO of state’s largest energy provider, Minneapolis-based Xcel, suggested last week that it’s comfortable with any outcome in the battle to control the Statehouse.

Xcel aims to cut carbon emissions by 80% by 2030 and be 100% carbon-free by midcentury, all while keeping bill increases below the rate of inflation. “We do that with economics and reliability in mind, so that tends to bring both sides of the aisle along,” Fowke said.

The governor’s proposal and a similar 100% clean energy standard proposed and passed by House Democrats last year haven’t been a key campaign issue in legislative races.

But according to MinnPost, Walz’s proposal to adopt California’s “clean cars” standard — a plan that the governor thinks can be implemented under existing state law — has gotten pushback from the Minnesota Automobile Dealers Association, which is urging candidates to sign a pledge to fight the rules.

To the southeast, Democrats are threatening to take control of the Statehouse in North Carolina, where lawmakers could address elements of the North Carolina Clean Energy Plan next year.

That plan, prepared by the state Department of Environmental Quality, calls for a 70% reduction in greenhouse gas emissions from the power sector by 2030 compared with 2005 levels, with a goal of carbon neutrality by 2050. It follows a 2018 executive order from Gov. Roy Cooper, a Democrat.

Cooper is up for reelection this year, but he has a double-digit lead in many recent polls.

“The outcome on Tuesday is really going to impact the ability to advance the governor’s clean energy plan,” said Peter Ledford, general counsel and director of policy at the NC Sustainable Energy Association.

Ledford said legislation related to the plan could be tied to issues such as a power-sector clean energy standard, multiyear rate plans, performance incentives and other rate mechanisms.

There is some bipartisan support for clean energy, especially given solar’s foothold in North Carolina. But nationally, discussions of cutting carbon and having a cleaner power mix often receive more attention among Democrats. And the state utility commission relies on the Legislature for guidance.

“North Carolina has a really stringent ratemaking statute,” Ledford said. “Variations on how rates are set are likely to require some sort of legislative change.”

North Carolina-based utility owner Duke Energy Corp. said shifting to cleaner energy is a priority for the company — and that it would work with lawmakers from both parties on ideas while also keeping prices affordable. In a recent report, the Energy News Network said political contributions associated with Duke are bipartisan but tend to favor Republicans.

“[W]e’ve set a vision to achieve net-zero carbon emissions from electric generation by 2050,” Grace Rountree, a Duke spokeswoman, said in a statement. “It’s going to take collaboration to reach these goals and continue the progress we’ve made.”

Michael Bitzer, a political scientist at Catawba College in Salisbury, N.C., said the state Senate may be more likely than the state House to flip. He said having both chambers along with the governor’s office would be a sea change for Democrats.

“If the Legislature divides between the chambers,” he said, “there’s going to have to be compromise.”