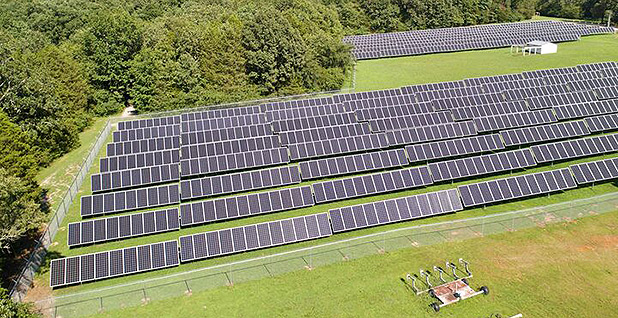 In Batesville, Arkansas, just 17 miles west of the state’s largest coal-fired power plant, a solar array at the local high school is having an unconventional impact: boosting teachers’ pay.

The Little Rock, Arkansas-based company found that the district’s annual utility bills surpassed $600,000, a steep sum for a school system that for years was strapped for cash — and struggled to retain teachers as a result.

But there was some good news.

The audit also revealed that the school district could save at least $2.4 million over 20 years if it outfitted Batesville High School with more than 1,400 solar panels and updated all of the district’s facilities with new lights, heating and cooling systems, and windows.

For Michael Hester, the Batesville superintendent, that eye-popping figure was reason enough to move forward with a comprehensive energy efficiency project.

The project that resulted has helped slash the district’s annual energy consumption by 1.6 million kilowatts and in three years generated enough savings to transform the district’s $250,000 budget deficit into a $1.8 million surplus.

Just as Hester envisioned at the outset, a major chunk of the money is going toward teachers’ salaries — fueling pay raises that average between $2,000 and $3,000 per educator.

“Now we’re in the top quartile in the state,” Hester said.

The schools in Batesville aren’t alone. At least 7,300 schools across the United States are using solar to save on utilities, introduce students to renewable energy and — in some cases — reduce their planet-warming emissions.

That’s according to a report by Generation 180, a nonprofit that advocates for clean energy and tracks the proliferation of solar through the U.S. public education system.

According to the group’s analysis, in 2019, 16% of U.S. school districts had installed a total of 1,337 megawatts of solar capacity. That means that about 5.3 million students now attend schools with solar, representing an 81% increase since 2014.

Also notable was the organization’s conclusion that if every U.S. public school used 100% solar power, the education system could drive emissions reductions that would be equivalent to closing 18 coal-fired power plants.

Standing in the way are several challenges such as policy roadblocks, financing complications and unease in some communities about opting for a nontraditional energy source.

According to Generation 180, 28 states and the District of Columbia have adopted policies to begin addressing those obstacles.

The policies do so by allowing solar development companies like Entegrity to use power purchase agreements to finance, build and maintain solar arrays on a customer’s property. The customer then pays the developer for the energy that the panels produce over a period of time — almost always at a lower rate than it would pay the utility.

Nearly 80% of solar capacity installed at U.S. public schools resulted from the arrangements that shift solar’s financial and logistical burdens onto professional energy companies, according to Generation 180.

“That means more than three-quarters of that solar on schools is not coming out of school budgets — it’s getting paid for by a developer who owns, installs and maintains the solar energy system,” said Tish Tablan, a Generation 180 program director. “So they’re seeing no upfront costs and immediate cost savings.”

In Arkansas, the Legislature didn’t pass its own version of that policy until March 2019. So the Batesville district’s array — which got off the ground earlier that same year — did not benefit from the financing mechanism. Instead, the district acquired the necessary funds through a $5.4 million bond.

The project nonetheless was successful, and it since has had a ripple effect on the surrounding region.

“There’s at least 20 school districts just in our area that have emulated our model,” Hester said. “We have the numbers to prove and to show from performance that we’re walking the walk. That’s a slam-dunk for districts around us.”

Rick Vance, who oversees Entegrity projects in Arkansas, Mississippi, Tennessee and Missouri, confirmed that the Batesville project — with the help of the recently adopted Solar Access Act — spurred a significant uptick in the number of nearby school districts considering solar.

“Batesville is in Independence County. So is Cedar Ridge and Midland and Southside. … All of them are doing solar, and they’re all doing it with us,” Vance said.

According to Tablan, that’s why Generation 180 advocates for solar in public schools. In many areas, educational facilities serve as influential community hubs. And that puts them in a position to “equip and inspire people to take action on clean energy in their own communities,” she said.

Hester said one of the more surprising outcomes of the energy efficiency initiative was the positive reaction from the Batesville community — which sits in the shadow of Independence County’s coal-fired power plant.

Nearly 30% of the Batesville area’s population is more than 60 years old, Hester said, which contributed to his initial uncertainty regarding how the community would feel about using taxpayer dollars to install solar at the local high school.

But Batesville residents were quick to notch their support of the initiative, Hester added, and they commended the district for doing its best to be efficient with their tax money.

Hester attributed that attitude, in part, to the reality that the nearby plant, which is run by Entergy Arkansas, is set to shut down by 2030.

“People know that that coal plant has a limited life,” Hester said. “It’s a loss of revenue; it’s a loss of jobs. There’s an anxiety about that.”

“So when this started showing how there are ways to help offset [those losses] and move on in alternative ways … it became a very pleasant surprise,” Hester added.

Vance said that in his work with Entegrity, he does encounter some resistance to solar. Many people have long-standing relationships with their local utilities, and renewable energy often is a new and unfamiliar concept.

But he added that it ultimately comes down to the savings, jobs and environmental benefits that solar can offer any community. He called it a “boomerang effect.”

“I’m in real rural parts,” Vance said. But, he added, “I get a lot of affirmative nods when I’m able to explain that solar is the cheapest way to produce power in the world right now. It beats coal; it beats gas — you know, all the fossil fuels that you would expect someone with a different mindset would be more into.”