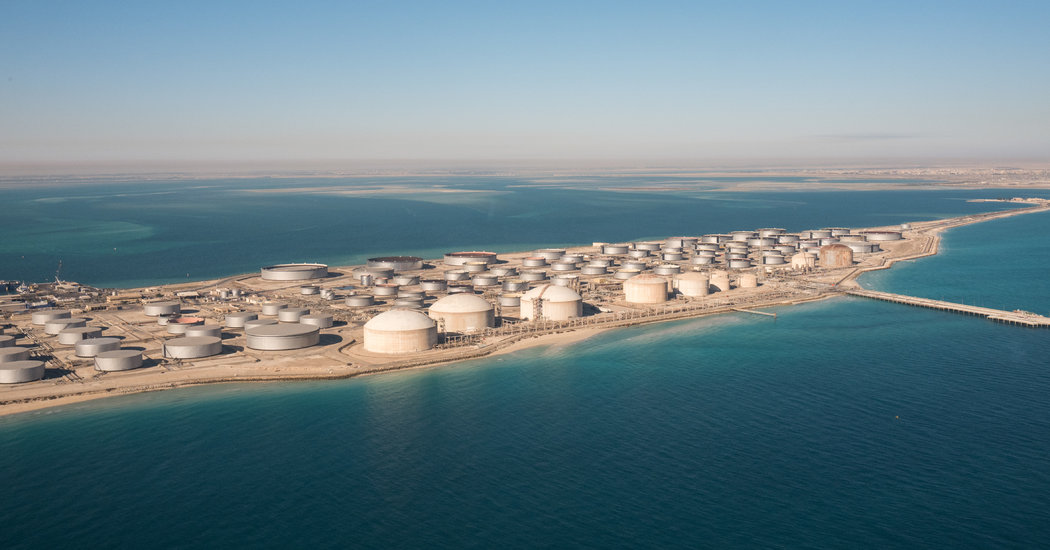 The world is awash in crude oil, and is slowly running out of places to put it.

Massive, round storage tanks in places like Trieste, Italy, and the United Arab Emirates are filling up. Over 80 huge tankers, each holding up to 80 million gallons, are anchored off Texas, Scotland and elsewhere, with no particular place to go.

The world doesn’t need all this oil. The coronavirus pandemic has strangled the world’s economies, silenced factories and grounded airlines, cutting the need for fuel. But Saudi Arabia, the world’s largest producer, is locked in a price war with rival Russia and is determined to keep raising production.

“For the first time in history we are seeing the likelihood that the market will test storage capacity limits within the near future,” said Antoine Halff, a founding partner of Kayrros, a market research firm. As storage space becomes harder to find, the prices, which have already fallen more than half this year, could drop even further. And companies could be forced to shut off their wells.

This chaotic mismatch in supply and demand has benefited consumers, who have watched gasoline prices slide lower.

And it has been a field day for anyone eager to snap up cheap oil, put it someplace and wait for a day when it’ll be worth more.

That’s where Ernie Barsamian comes in.

While the coronavirus epidemic threatens to bust parts of the United States oil industry, Mr. Barsamian’s business, which finds places to park unwanted fuel, is thriving, at least for now.

“We usually do about two storage deals a day,” said Mr. Barsamian, who runs a company in Princeton, N.J., called the Tank Tiger, a nod to the local university’s mascot. “We have done about 120 in the last couple of weeks.”

Mr. Barsamian matches clients like commodity traders or refiners that have oil they want to store with tank farm owners and others who have places to put it, collecting a fee of 1 cent per barrel a month from the latter.

People in the energy industry say they have never seen changes happening at the speed and magnitude that are occurring because of the coronavirus.

The first major downturn in demand occurred in February when China, the world’s largest energy consumer, shut down much of its economy in an effort to stabilize the spread of the coronavirus. Now, the slowdown is rolling across the world, with much of Europe and major parts of the United States in lockdown.

Analysts at IHS Markit, a research firm, recently forecast that demand for oil could fall by as much as 14 million barrels a day — more than the daily consumption of China last year — in the second quarter.

The price war between Saudi Arabia and Russia has exacerbated the situation. The Saudis are slashing prices and threatening to ramp up oil output by about 25 percent to 12 million barrels a day, beginning in April. The surplus, IHS Markit forecasts, could add up to a tank-busting one billion barrels or more.

For now, Mr. Barsamian is finding places for it.

Mr. Barsamian, 60, set up his business five years ago after retiring from Hess, a midsize U.S. oil company, where he also worked in the storage terminal business.

He said the jump in calls from clients started on March 8 as the Saudis promised to raise production — rather than cut output, the usual response to diminishing demand.

Not only does oil need a place to go, but the state of the oil market has provided traders with an opportunity to make money. They are taking advantage of a market where prices in the future are much higher than current levels. For instance, a barrel of light, sweet U.S. crude is priced at about $25 a barrel for May, about $6 lower than August. So a trader or an oil company can make easy money by buying oil at today’s depressed prices, selling it on the futures market and pocketing the difference minus storage and other costs — a situation known as contango.

Mr. Barsamian said the contango had jolted interest in storage in Cushing, Okla., where oil is delivered to settle the futures contracts for West Texas Intermediate crude oil. The price of putting a barrel of oil in a tank in Cushing has more than doubled to about 55 cents per month, he said.

Knowing how much oil is stored around the world is a key metric to “understanding the health of the oil market,” said Hillary Stevenson, an analyst at Genscape, a market intelligence firm. But, she warned, “capacity is finite; the safety net is only so big.”

Ms. Stevenson said the most important storage areas in the United States, like Cushing, were about half full in the middle of March, but analysts say the safety net is being stretched like never before.

One firm, Kpler, uses satellite images to calculate how much oil is on ships and in tank farms. Over a recent weekend, the company detected 10 million barrels of oil, about 10 percent of the world’s daily consumption in normal times, flowing into storage facilities.

“We are in an incredibly oversupplied market at this point in time,” said Alexander Booth, Kpler’s head of market analysis.

One sign of a glut: The volume of oil placed on ships to wait for better days has grown by about 25 percent in March. According to Mr. Booth, about 81 loaded tankers — an unusually high number — are loitering off coasts around the globe.

The fact that oil is being put on ships, a more costly proposition than storage on land, implies that the world is running out of room, at least in some places, Mr. Booth said. Chinese buyers, perhaps seeing current prices as a bargain, continue to import at high levels, he said. Mr. Booth estimated that three-quarters of a billion barrels of usable storage capacity remained around the world — not enough room for the buildup in supplies some forecasters are predicting.

In the wake of price-cutting by Saudi Arabia and other countries, oil companies in the United States are being paid less. On Tuesday, Enterprise Products, an Oklahoma company, posted prices for various grades of crude that ranged as low as $7.61 a barrel.

Already producers are beginning to dial back. Chevron, one of the key operators in the Permian Basin, the largest shale field in the United States, forecast on Tuesday that its output there would be 20 percent less than previously stated.

Space is running out in western Canada, whose 40 million barrels of storage is now more than three-quarters full, according to Rystad Energy, which estimates that producers will need to slash production by 11 percent. Jason Kenney, the premier of Alberta, has already suggested that production curtailments would be required.

Mr. Barsamian does not see an emergency yet, although he acknowledges that much of the capacity in the key tank farms is probably already booked.

“I always say that the world is never going to run out of storage,” he said, arguing that operators will just add more tanks if market incentives are right. “I have never seen it happen.”

This time, though, analysts say, the glut could be off the charts, and the new flows planned by Saudi Arabia, Russia and other producers have yet to hit the markets.

“That oil will just move from a tank in Saudi, probably, into someone else’s tank or just sit on a vessel,” Mr. Booth said. “It is certainly not needed.”