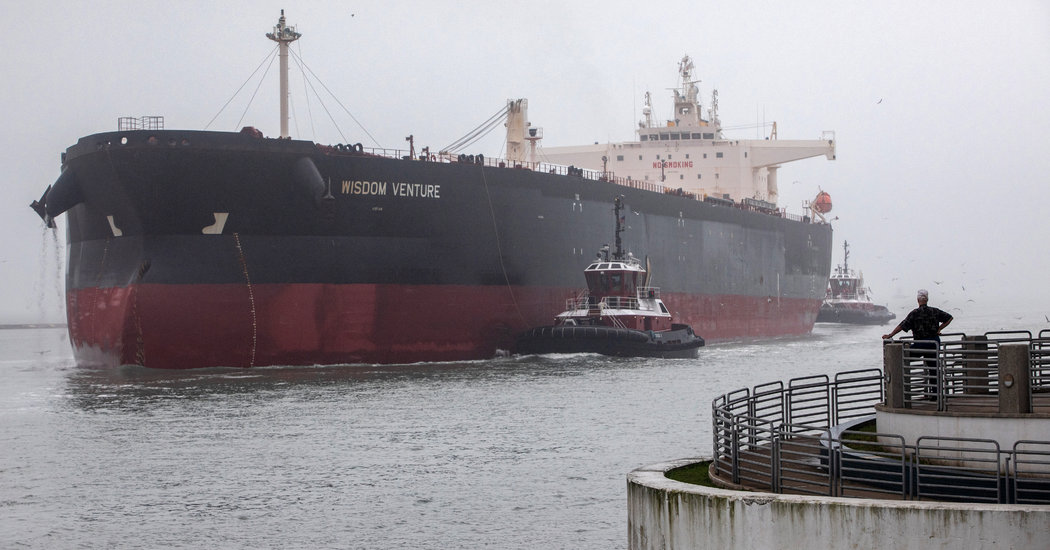 The price of oil has plunged, but the price of finding a place to put it has soared. And if you are in the business of providing a temporary home for the world’s glut of crude, you’ve hit the jackpot.

More and more massive tankers at sea are being used simply to hold the oil — as much as 2 million barrels per vessel — until it is wanted. Other vessels are busy carrying it to buyers like China, which is taking advantage of prices not seen in two decades.

“We are one of the few industries making money in this period,” said Hugo de Stoop, chief executive of Belgium-based Euronav, one of the world’s largest tanker companies. The current market for vessels, he added, “is totally and completely unusual.”

Shipping is a business of wild swings that tax a vessel operator’s patience and balance sheet, and right now tanker owners are profiting from the same forces that are causing layoffs and bankruptcies at oil companies elsewhere.

Demand for oil has plummeted by about one-third as airplanes are parked on runways and cars sit at home, stilled by lockdowns aimed at curbing the spread of the coronavirus. At the same time, Saudi Arabia and its allies have ramped up output, as part of a price war with Russia.

The flood is filling tank farms to the brim, so traders and producers are chartering ships like Mr. de Stoop’s 70 oil tankers to hold their crude, waiting for a more advantageous moment to unload it.

The tanker industry is having its best spell in at least a decade, analysts say.

Ships owned by companies like Euronav are like taxis, waiting for fares. Most of Euronav’s ships operate at so-called spot rates, essentially whatever they negotiate with customers, which vary from day to day.

Oil companies have been chartering Euronav’s Very Large Crude Carriers, or V.L.C.C.s — tankers longer than three football fields — for $150,000 to $200,000 a day, Mr. de Stoop said, depending on where they are going. As it costs about $18,000 a day to run a ship — for expenses like paying and feeding a crew of 25 — profits at the moment are huge.

It’s not always this way. To give an idea of the ups and downs possible in the industry, a tanker now heading from the Middle East to China will earn on average about $178,000 a day compared with $15,000 a year ago, according to Clarksons, a ship brokerage.

Indeed, Mr. de Stoop has ridden through some spectacular swings in recent months. As the new year dawned, he said, charter rates were around $120,000 a day, but they plunged to around $25,000 in February when the economy in China, the world’s largest oil importer, essentially shut down to control the virus spread.

After Saudi Arabia and Russia kicked off their price war in early March, rates soared well over $200,000 a day as the Saudis chartered as many as 18 tankers.

The tanker business is receiving an added boost from the futures market, where traders are betting that oil in the months ahead will sell for much higher prices than the depressed $20 a barrel that Brent crude, the international benchmark, fetches now. Traders figure they can make money by parking oil on ships and selling it later.

The volume of oil idling off places like Fujairah in the United Arab Emirates or near a Chevron refinery in Long Beach, Calif., has soared 40 percent since the beginning of April, to 158 million barrels, said Alexander Booth, head of market analysis at Kpler, which tracks petroleum shipments. That is more oil than the world would consume over a day and a half in normal times.

Mr. Booth also said that in the same period the total amount of crude being carried on ships — what the industry calls oil on water — increased by about 100 million barrels to 1.2 billion barrels. Tankers may have destinations booked but are encountering long delays unloading their cargoes as refineries and other customers have no use for them.

The huge increase is “a very strong signifier of how much excess oil is out there,” he said.

The business of shipping oil from the Persian Gulf is still strong, and shipping is much more profitable than storage: Mr. de Stoop said storage rates of around $80,000 a day are about half what he can charge for a voyage.

Analysts say that 10 to 15 percent of the world’s very large crude carriers are now being used for storage, and that the number is growing rapidly. In the short term, this form of demand is likely to support shipping rates, Mr. de Stoop said, because each tanker used to park crude is no longer available to transport it.

He said there were about 1,500 smaller vessels that could also be used for this purpose if the supply of large ones is exhausted. Rising charter rates may eventually make this form of storage prohibitively expensive.

“I think we will run out of economic sense, before we run out of ships,” he said.

As shipowners relish the moment, some analysts warn that this corner of the oil industry is unlikely to thrive for long because of depressed demand for crude.

Jonathan Chappell, a shipping analyst at Evercore ISI, a securities broker, said that the tanker operators were, in effect, seeing the activity of a couple of years crammed into six months. Once normality returns, he said, the futures market will shift, and traders and companies will liquidate the inventories of oil built up at sea and on land, slashing the need for ships.

“At some point,” he said, “you are going to have to work through the hangover.”

Mr. de Stoop said he was hopeful that with conditions in the oil markets having reached such extremes as the negative prices recorded on Monday, that it would take a long time for the factors benefiting the tanker trade to correct.

“In the meantime, we will enjoy this extraordinary period of time from an earnings point of view,” he said.