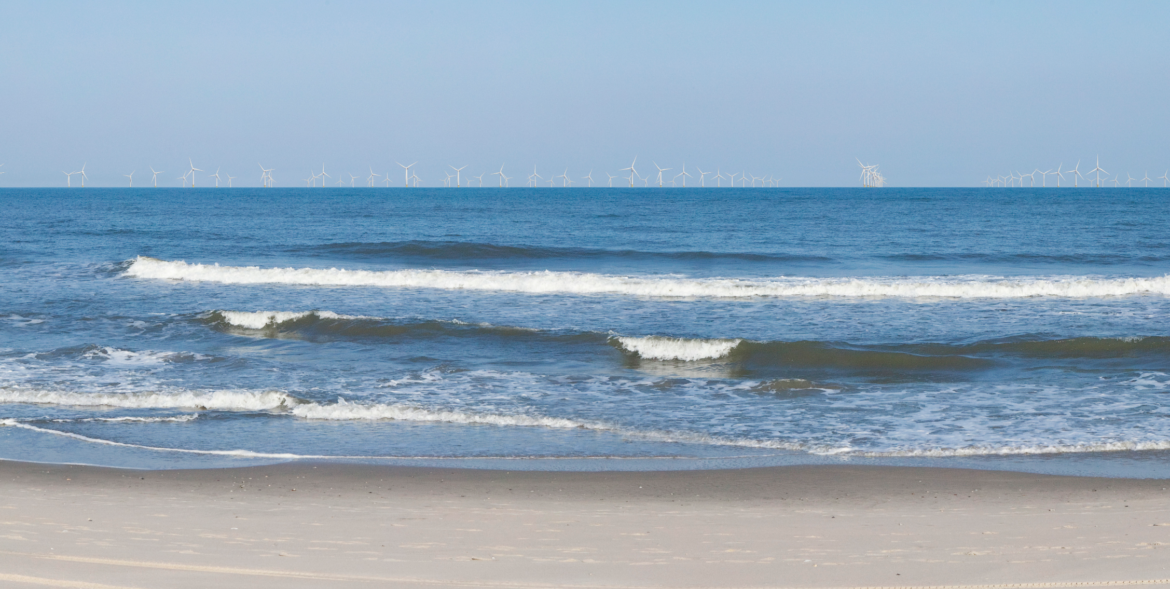 A screenshot of the online simulation shows an example of 121 turbines at 8 miles offshore.

University of Delaware researchers find most beachgoers are indifferent to wind farms built at least 5 miles from shore.

A new study of beachgoers’ attitudes about having to look at offshore wind turbines from the sand found that most are indifferent to the installations at distances greater than five miles.

The study, published in the journal Energy Policy, presented the survey takers with high-quality online simulations of 100 wind turbines out in the ocean at distances ranging from 2.5 to 20 miles.

“What we found is consistent with previous studies we’ve done and others have done,” said Jeremy Firestone, director of the Center for Research in Wind at the University of Delaware and one of the study’s authors. “Most of the visual impacts are quite small after 10 miles.”

Further, 10% to 17% of respondents reported that the presence of the turbines actually improved their beach experience at distances of 10 miles or greater.

“We do find a lot of people support offshore wind turbines because of the representation of clean energy progress,” Firestone said.

Researchers contracted with an Irish firm called Macroworks to produce the simulations, which pan across the seascape to provide a fuller representation of what a wind installation would actually look like.

The study is intended to help estimate the effect of large offshore wind projects on recreational beach use on the East Coast. More than 20 such projects are now in the planning stages, and some beach communities are worried about the economic impact.

Officials in the resort town of Ocean City, Maryland, for example, have expressed concerns about the fallout from two wind farms planned off the coast of Maryland and Delaware. Marwin, proposed by U.S. Wind, will be about 17 miles from Ocean City, and Skipjack, by Orsted, is to be 19 miles from the Maryland-Delaware border.

The federal Bureau of Ocean Energy Management, which authorizes wind energy leases and funded this study, was particularly interested in which types of tourist-friendly beach areas would be least impacted by offshore wind farms, said George Parsons, a professor of marine science and policy and economics at the University of Delaware and a co-author.

“Their working hypothesis was, we shouldn’t be putting them in the Atlantic-City type of busy beach areas where there’s already a lot of stuff going on,” Parsons said.

So to get at that question, researchers asked those respondents who reported that the presence of a wind farm would worsen their experience whether they would skip going to that beach as a result. Contrary to what BOEM expected, respondents were far less likely to say they would avoid a beach with a wind farm if it had a busy boardwalk, which is representative of a highly developed beach community.

“That made sense to me, as a big portion of the activity at those beaches is not just beach-going — it’s walking on the boardwalk, buying cotton candy, going to outlets,” Parsons said. “The turbines are a little less front-and-center for a larger share of the population than the other family beaches.”

Interestingly, beachgoers at state, local or national park beaches were also less likely to report that they would go elsewhere, perhaps because those places tend to attract people “who are more environmentally conscious, a little greener,” Parsons said.

The study also looked for positive impacts from a wind farm. Beachgoers were asked if they would take a “curiosity trip” to see a project, and if so, how many. The share who said they would take such a trip ranged from a high of 11.4% at 12.5 miles offshore to a low of 3.6% at 20 miles offshore.

All told, the data suggested a wind project could generate 10 million to 12 million curiosity trips, though they did not ask beachgoers when they might take those trips. But even 1 million trips a year could be a significant revenue booster for beach communities, researchers concluded.

Parsons noted that another study published last year found just such an effect from the nation’s first offshore wind farm about three miles off the coast of Block Island, Rhode Island.

That study, by Corey Lang, an associate professor in the Department of Environmental and Natural Resource Economics at the University of Rhode Island, measured AirBnb rental activity on the tourist-dependent island before and after the emergence of the wind farm.

The study concluded that the wind farm acted as a tourist attractant during each of the peak-season months of July and August after its construction, resulting in a seven-night increase in the number of nights reserved and a 19% point increase in occupancy rates.