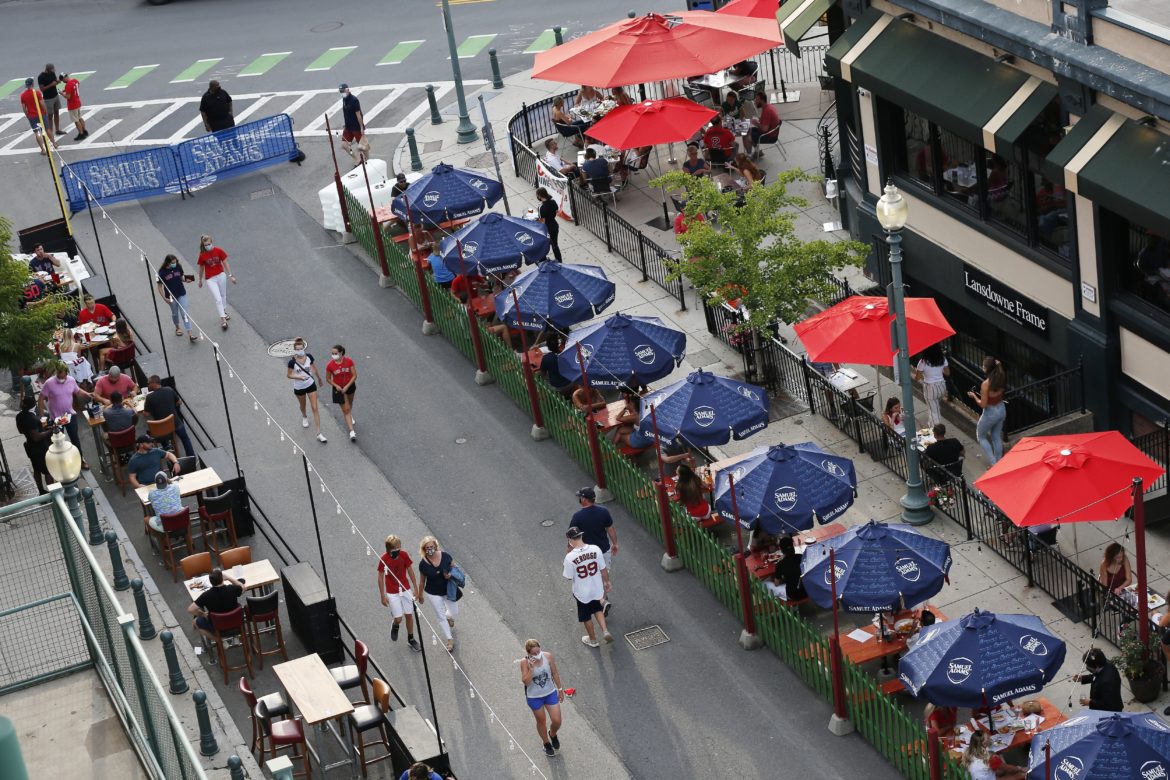 Tables line a closed off street outside Boston’s Fenway Park before an opening day baseball game between the Boston Red Sox and the Baltimore Orioles in July.

Quick changes in response to the coronavirus outbreak are changing thinking about how public streets are used.

The coronavirus pandemic has prompted communities throughout greater Boston to rethink how public roadways are used, often creating more people-centric and environmentally friendly spaces. Now, activists and urbanists are thinking about how to capture and expand these benefits, even after COVID-19 subsides.

“Roads were always this space that people assumed was the exclusive domain of the car,” said Jonathan Berk, creative director for placemaking advisory firm Bench Consulting. “We’ve started trying to reclaim that.”

Early on, Massachusetts was one of the states hardest hit by COVID-19. In March, Gov. Charlie Baker ordered nonessential businesses to close. A phased reopening began in May, with restrictions that initially prohibited indoor dining and limited the number of people allowed in other places of business at a given time. Traffic congestion and public transit use plummeted.

As cities and towns figured out how to both support local businesses and protect public health, many considered new uses for public roadways. Many municipalities allowed restaurants to expand outdoor seating into parking spots along the street. In Boston’s infamously congested North End, diners overflowed the curbs into spaces that previously held parked vehicles almost constantly.

Other towns closed down sections of streets to create pedestrian thoroughfares, allowing stores to sell goods outdoors and giving people a chance to get out and about while maintaining distance from others.

“We saw a world with much less traffic congestion, we saw a world with far reduced levels of tailpipe emissions and pollution, we saw more space on our local streets for people to be outside or use that space differently than it has traditionally been used,” said Chris Dempsey, director of nonprofit group Transportation for Massachusetts. “All of those things are possible in the long-term, it just takes changes in public policy.”

This concept that public roads are for people, not just for vehicles, has been catching on in many cities around the world. Paris has closed a previously busy highway along the Seine River to cars, and several neighborhoods in the center of the city will be prohibiting cars once a month beginning in November. In Norway, the capital city of Oslo has been moving toward a so-called car-free city center since 2015 by removing parking spaces, banning cars from certain areas, and expanding its bike-share program.

The goals of these types of changes are multilayered. There are also environmental benefits to lowering the dependence on private vehicles, and encouraging lower-carbon modes of transportation like public transit and walking. There are social benefits in bringing more people into public spaces, and economic advantages in making it easier and more appealing to patronize local businesses.

In Boston, when the pandemic slowed traffic and got more people walking and biking, city planners decided to seize the moment to accelerate the implementation of plans it already had in the works. The city created 3.5 miles of pop-up bike lanes, largely in downtown Boston. In September, the city announced it would make these lanes permanent. Three priority bus lanes will also be added, making bus service more reliable and up to 25% faster, said Vineet Gupta, director of planning for the city’s transportation department.

The city is also analyzing the existing outdoor dining program and looking into how to continue it next year, he said. The program, he said, helps shore up small businesses, preserve jobs, and change residents’ thinking about how public spaces are used.

“There’s been a change in how people perceive their streets with the advent of outdoor dining, and a greater recognition that streets are for people and not for cars,” Gupta said.

Even as bike lanes and outdoor dining spark excitement, however, it is essential to remember the needs of low-income and Black and Brown communities, said Stacy Thompson, executive director of LivableStreets Alliance.

She points to several projects these communities have been advocating for that have, so far, received little action, including a bus lane on Warren Street in the neighborhoods of Mattapan and Roxbury, one of the busiest bus routes in the city. In March, the city canceled a public meeting on plans for the bus corridor because of the coronavirus, but no further moves have been made.

There are also crosswalks that need repair and bus stops that need expanding, she said. As leaders move forward with plans to remove the focus from cars, she said, they need to make sure their priorities include the needs of less-advantaged neighborhoods.

“What has been so critically missing from all these conversations and pretty pictures is that you only get to the part where you get to put dining outdoors when you are in a community that isn’t dealing with all these other systemic inequities,” she said.

Progress of any kind is going to require strong political leadership, Dempsey said. Public policies will need to incentivize walking and public transit use by making these modes safer, cheaper, and more convenient. At the same time, measures like congestion pricing could lessen the appeal of driving cars.

And communicating the vision behind these changes will be essential, so people can see they are being promised something new, rather than being asked to give something up.

“We don’t need to ban driving, ban gasoline,” Dempsey said. “We just need to ensure that the incentives that we provide are better balanced.”