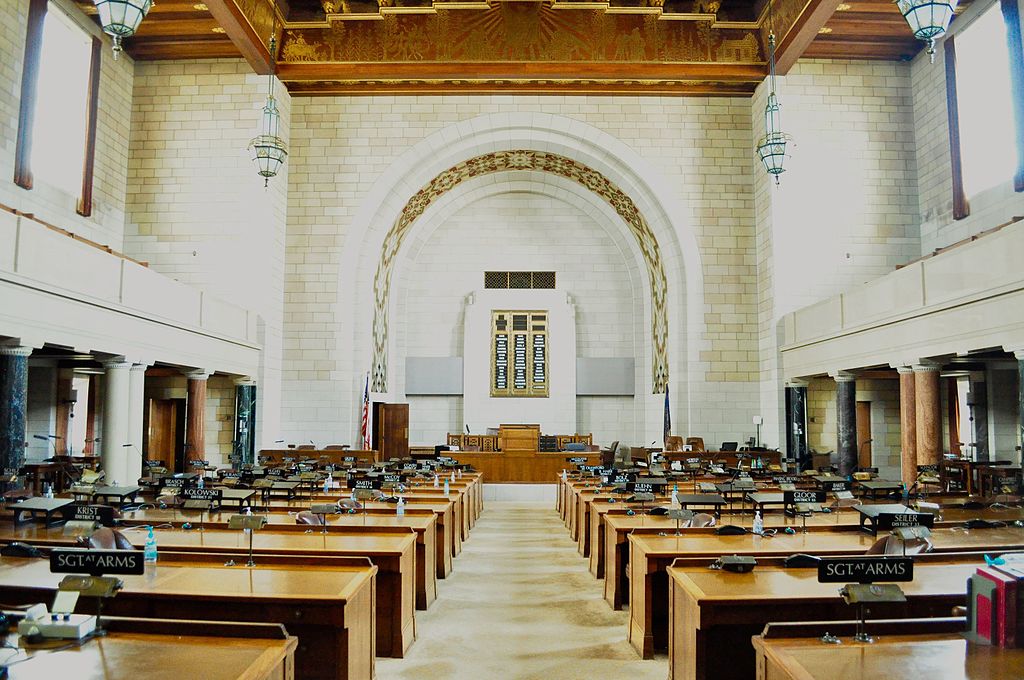 The Nebraska legislative chamber at the State Capitol in Lincoln. State lawmakers here and in Kansas are weighing whether to draft state energy or climate plans.

The experience in Iowa and Missouri shows how drafting an energy plan can help shape a state’s energy direction, even if policymakers don’t always follow it.

As legislators in Kansas and Nebraska prepare to debate whether to draft state energy or climate plans, the experience of two neighboring states suggests that advocates shouldn’t expect the plans to be a panacea.

“I can’t tell it ever gets referenced,” James Owen, executive director of Renew Missouri, said of his state’s 2015 energy plan, which in his view has been overshadowed by investor-owned utilities’ integrated resource plans.

And in Iowa, attorney Josh Mandelbaum of the Environmental Law & Policy Center says the state has “strayed from the plan with disastrous consequences,” citing lawmakers’ 2018 rollback of energy efficiency programs.

In each state, however, the process likely produced indirect benefits by spurring stakeholder conversations on the states’ energy futures, even if the documents haven’t driven policymaking as some had hoped they would, advocates say.

“They take some ideas and some relationships” away from the experience, said John Hickey, the Missouri coordinator at Clean Energy for Biden. “That accelerates change.”

This winter, lawmakers in two Plains states are backing bills calling for a similar process. In Nebraska, state Sen. John Cavanaugh has proposed spending $250,000 on a climate action plan that would be produced by the University of Nebraska. In Kansas, state Rep. Mark Schreiber is preparing a bill to form a task force to provide “strategic guidance and objectives” for energy in the state.

“It’s not my intent to establish hard goals or mandates or things like that,” said Schreiber, who clarified that it would not be a climate plan. Rather, he wants the state to consider how it might source energy in the future, and how it might lead to a more resilient and stable grid, as well as enhanced economic development.

Cavanaugh’s bill references a 2014 climate risk assessment produced by the university at the request of the Nebraska Legislature. “The next step recommended was to develop a plan,” Cavanaugh said. “We are taking that next step.”

The vast majority of states already have a climate or energy plan. According to the National Association of State Energy Officials, all but eight — including Kansas, Illinois and Wisconsin — have drafted a state energy plan. The Center for Climate and Energy Solutions says 33 states have released or are developing a climate action plan.

Schreiber said he has consulted with Iowa’s energy office and hopes to incorporate some aspects of the Iowa document into a Kansas plan.

“Rather than focus on mandates or requirements, they took it from the aspect of economic development for the state, and not only encouraging current energy resources, but identifying new technologies and bringing those to Iowa to test out and see if they fit,” Schreiber said.

Iowa’s economic development authority has invested in research into battery storage and biofuels, two technologies that were identified as promising in the energy plan. Mandelbaum said the state’s plan set out “a strong roadmap,” but follow-through has been inconsistent. Still, “Iowa has seen continued growth of renewable energy, and often the energy plan was cited as a reason to support those projects.”

In Missouri, Owen said investor-owned utilities follow their own three-year plans more than the state document, and that state officials are generally too reluctant to push a direction on energy. “We have a timid approach to the idea that we are going to micromanage utilities in the state.” Hickey said he sees indirect benefits from the process in Missouri. For example, the woman who captained the process, Kristy Manning, went on to a job as a senior policy advisor to the Missouri Public Service Commission.

“I think the decisions made at the PSC are in many cases in sync with the plan,” Hickey said. He mentioned the commission’s endorsement of the Grain Belt Express transmission line as an example.

Hickey also points to Ameren Missouri, the state’s largest utility, which participated in the process and recently announced wind farm acquisitions and a commitment to halve its emission by 2040. Another participant, Washington University, is in the midst of what Hickey called a “LEED building boom” on its St. Louis campus.

“The people involved in the plan are still involved in policy today and they haven’t forgotten what they did,” Hickey said.

Dorothy Barnett, executive director of the Kansas Climate and Energy Project, thinks her state would benefit from having an energy plan.

“We’ve been saying for at least three years now that one shortcoming of Kansas energy policy is that we don’t have a plan,” Barnett said. “You need a plan to know where you’re headed.”

Getting a task force approved won’t be easy in Nebraska or Kansas. Cavanaugh said his Nebraska bill has been assigned to the natural resources committee, which, with some new personnel, he said is likely to be less receptive than the committee that reviewed the bill last year and approved it by a vote of 6-2. The bill subsequently was killed by a filibuster on the Legislature floor.

In Kansas, Schreiber declined to speculate on the bill’s chances of passage. The task force likely will include relevant committee chairs in both chambers and other people he’s still considering. He’ll encourage perspectives from across the state so it will be clear that “this isn’t just my energy plan.”

“I want to start the discussion,” Schreiber said, “and keep it moving forward.”