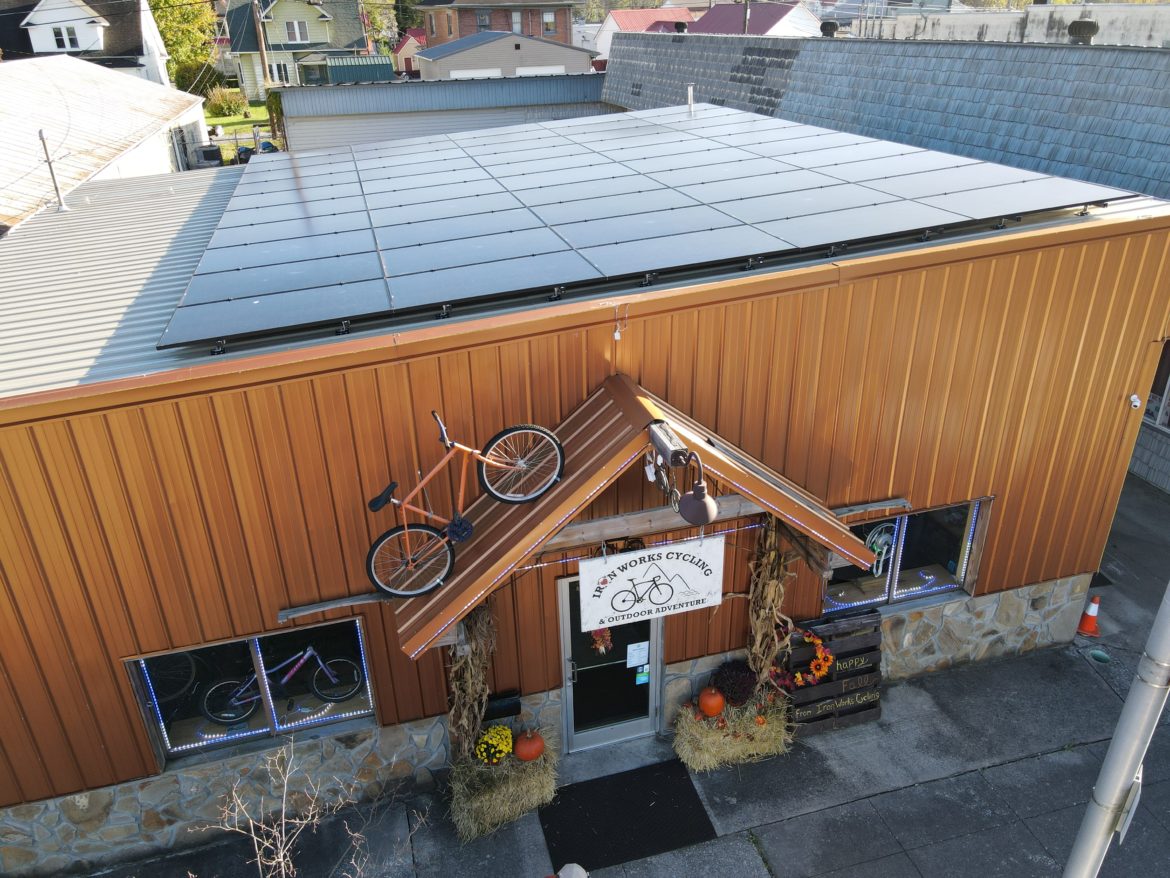 A 16-kilowatt array on the roof of Iron Works Cycling is the first successful project for a regional group trying to seed solar projects across seven coalfield counties.

Every other time Lorenzo Rodriguez had moved with his wife as she advanced her academic career, finding a job had been a cinch.

His employment possibilities became iffier when they landed in remote Big Stone Gap for Josephine’s biology professorship at nearby University of Virginia-Wise seven years ago. Undeterred, the personal trainer and coach befriended Bobby Bloomer, the owner of the local gym. By 2014, the two men had bought and gutted a vacant barber shop, reinventing the space as the community’s first bicycle outlet.

This autumn, in yet another first for the region, the roof of their Iron Works Cycling was topped with a 16-kilowatt solar array. The installation is the initial success for the Solar Workgroup of Southwest Virginia’s pursuit of commercial-scale projects across the seven coalfield counties.

“We’re very, very visible because we’re right on the main road, so this can be a conversation-starter about solar,” Rodriguez said. “One of the reasons we wanted to do this is we’re hoping we’re one of many. That would be the ultimate goal.”

Indeed, agreed Chelsea Barnes, new economy program manager with Appalachian Voices, an advocacy organization instrumental in founding the workgroup in 2016. Area innovators had bandied about the idea of collaborating to advance renewable energy at a University of Virginia-Wise forum in 2015.

“It’s just so important for us to get something going,” Barnes said about an initial success. “Having panels on a roof makes what we’re trying to do much more of a reality.”

Several years ago, the collaborative rolled out an audacious proposal to catalyze the mountainous region’s economy with 4.2 megawatts of solar on the roofs of schools, businesses, nonprofits and local government entities across Wise, Buchanan, Dickenson, Lee, Russell, Scott and Tazewell counties.

“We are committed to ensuring that all communities have energy choice,” he said. “That is why we continue to dedicate ourselves to these types of partnerships.” 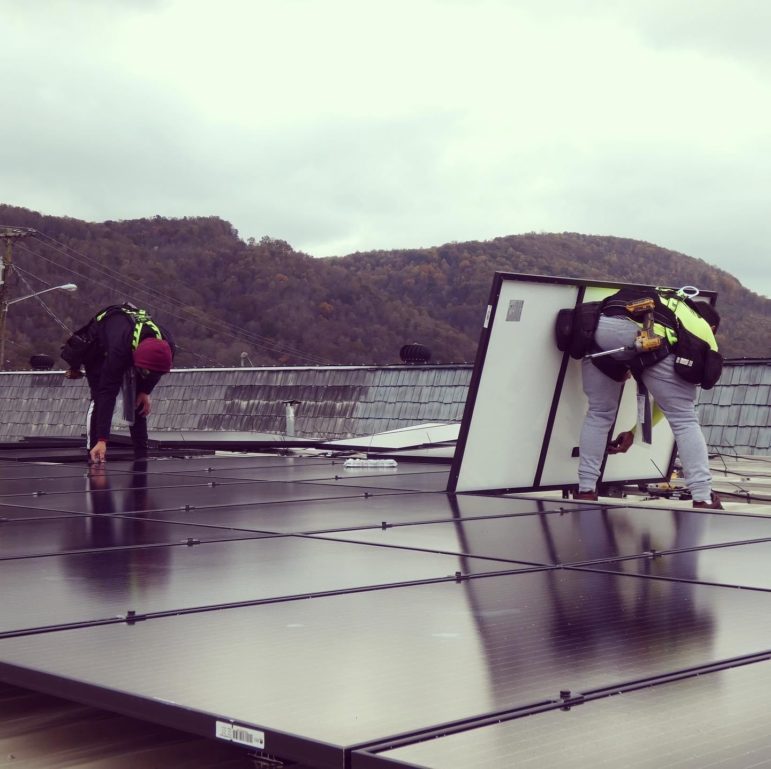 Iron Works Cycling’s solar project had been on hold because it was too expensive for entrepreneurs Rodriguez and Bloomer to finance independently and too small for a third-party power purchase agreement, which has a 50-kilowatt floor.

Barnes was determined to ferret out an answer. Her organization had received a $25,000 Solar Moonshot grant via the Left Coast Fund. The catch was that the grant manager, Hammond Climate Solutions, initially wanted the money to go toward a solar array for a nonprofit.

However, Barnes was able to convince Hammond Climate Solutions to support a business instead by touting the co-owners’ enthusiasm for Big Stone Gap. In addition to building a disc golf course at a local park, the pair has consistently donated money to high school sports teams, local rides and races, and also contributed to local festivals, parades and block parties.

“Chelsea took a leap by suggesting us and it worked out,” Rodriguez said. “We said, yeah, let’s go.”

“We’ll be breaking even in two and a half years,” he said of the savings on their monthly electric bills. “As a businessperson, that’s a no-brainer.”

Under a net-metering arrangement, they can sell excess energy back to Old Dominion Power, a unit of Kentucky Utilities. Plus, the two earn federal tax credits for their investment.

While Barnes is thrilled she could maximize the Solar Moonshot grant, she and other workgroup members know a renewable renaissance takes moxie, ingenuity and diligence. Setbacks have forced them to pivot constantly.

Some of the remaining original projects likely will eventually proceed. Several continue to be stonewalled by a range of policy challenges. Still others have been folded into a venture the workgroup unveiled in early September called Securing Solar for Southwest Virginia.

The name is a nod to Secure Futures, a solar developer west of Charlottesville in the Blue Ridge Mountains. The 16-year-old Staunton-based company will be a linchpin to the success of a plan by private and public partners to install up to 12 MW of solar power in the next three years while also creating 15 full-time jobs in solar installation, sales and marketing, entrepreneurship and small business development.

Secure Futures CEO Tony Smith has laid out a 5-5-10 proposal. That is, the partnership will construct 12 MW of solar arrays at five commercial buildings, five multifamily housing units and 10 schools by 2023.

That relatively rapid schedule will require cooperation from a maze of in-state and out-of-state utilities. As well, the deals will likely test the boundaries of new legislation such as this year’s Virginia Clean Economy Act and Solar Freedom Act and last year’s law that allowed electric co-ops to expand net metering. 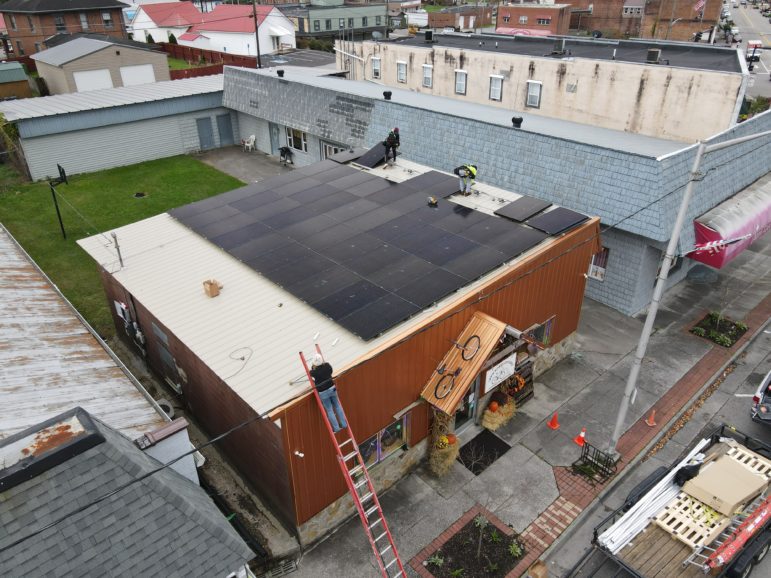 The incident that sparked Rodriguez’s “aha!” moment about his future in Big Stone Gap happened shortly after he arrived. Bloomer’s wife, Elise, was hooked on the spinning class offered inside her husband’s gym. But she had to travel for miles to find a bike she could pedal outdoors.

Rodriguez jokes that he and Bloomer, 52, “weren’t very creative” by copying the gym’s Iron Works theme at the bike shop. But they wanted continuity because the two businesses are close, but separated by the Powell River.

The solar bug bit about three years ago when Rodriguez attended a Solarize Wise event promoted by Appalachian Voices.

“I grew up in San Jose,” said the 44-year-old Californian. “Solar is a little more advanced there, but I wanted to see what was possible here.”

An assessment by a developer revealed that an 8.8 kW system on his house was affordable, so he proceeded with that. The cost for solarizing the bike shop, however, was out of reach then.

Now, Rodriguez relishes his role as a solar ambassador.

“Being a small business owner has opened a lot of doors,” he said about assuaging his initial apprehensiveness about relocating to a place where he didn’t have roots. “I figured I could either remain an outsider or force myself to get involved. We’re active because we just want our community to be better.”

He and Bloomer have immersed themselves in the local government and business association.

They’re inspired that the Securing Solar partnership provides start-up funds to Lonesome Pine Solar, which has its headquarters in Big Stone Gap. As well, it awards a $50,000 grant to Mountain Empire Community College, also in Big Stone Gap, to fund faculty mentoring and solar installation apprenticeships.

“If enough people get on board, that’s job creation,” Rodriguez said. “And more solar gives us the ability to sustain those jobs.”