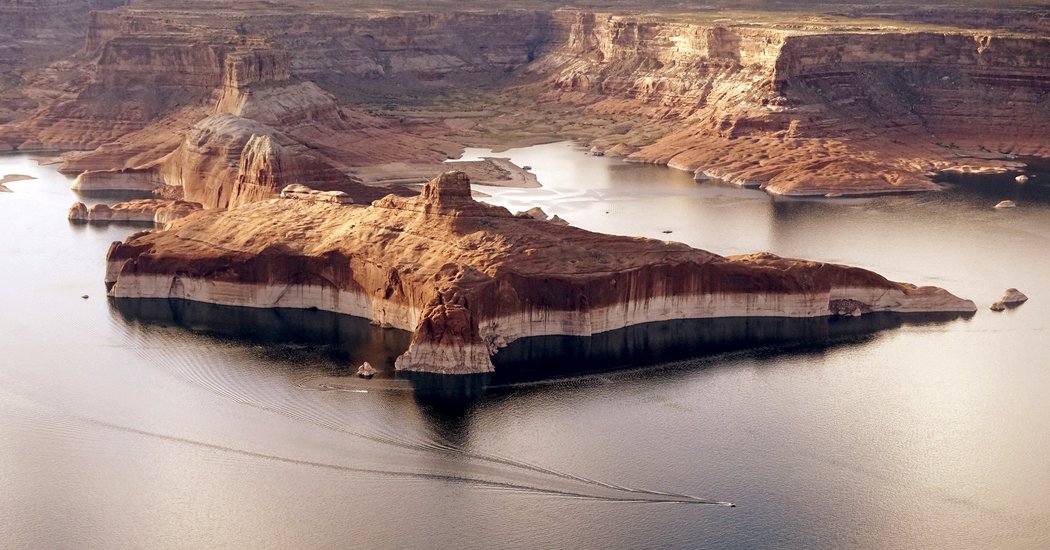 ALBUQUERQUE — A severe drought that has gripped the American Southwest since 2000 is as bad as or worse than long-lasting droughts in the region over the past 1,200 years, and climate change has helped make it that way, scientists said Thursday.

The researchers described the current drought, which has helped intensify wildfire seasons and threatened water supplies for people and agriculture, as an “emerging megadrought.” Although 2019 was a relatively wet year, and natural climate variability could bring good luck in the form of more wet years that would end the drought, global warming increases the odds that it will continue.

“We know that this drought has been encouraged by the global warming process,” said Park Williams, a bioclimatologist at Lamont-Doherty Earth Observatory at Columbia University, and lead author of a study published Thursday in Science. “As we go forward in time it’s going to take more and more good luck to pull us out of this.”

While the term megadrought has no strict definition, it is generally considered to be a severe dry period persisting for several decades or longer. Many climate researchers and hydrologists have long thought that a Southwestern megadrought was highly likely. A 2016 study put the probability of one occurring this century at 70 percent or higher.

Dr. Williams and his colleagues reconstructed drought conditions in the Southwest for every year back to 800 A.D., using tree growth as a proxy for soil moisture content. Examining nearly 1,600 tree-ring records, they found four periods of more than two decades each during which soil moisture content was far below the baseline for the entire 1,200 years, indicating severe drought conditions of lack of precipitation and increased dryness. One of these megadroughts, in the 13th century, lasted more than 90 years.

Their analysis showed that, as measured by soil moisture content, the current drought is more severe than three of the ancient ones. Only one in the late 1500s was worse, and not by much, the researchers said.

“Ancient megadroughts have always been seen by water managers as worst-case scenarios,” Dr. Williams said, “and we just have to hope that there’s some kind of protection measure in the climate system that’s not going to allow one of those to repeat itself. And what we’re seeing is that we’re actually right on track for one.”

Water temperatures in the tropical Pacific Ocean are thought to play a large role in determining drought conditions in the Southwest, both now and in the past. Cooler sea-surface temperatures — what is commonly called La Niña — affect the jet stream, which pushes storms approaching Western North America to the north, leaving the Southwest drier.

But since the beginning of the 20th century, when large-scale emissions of heat-trapping gases began, warming has played a role as well. Using 31 computer climate models, the researchers estimated that climate change contributed nearly half to the severity of the current drought.

Put another way, without global warming the current drought would be only of moderate severity rather than one of the worst.

While the natural variability of La Niña conditions continues, Dr. Williams said, “all of that is being superimposed on what appears to be a pretty strong long-term drying trend.”

The current drought has followed a pattern that is similar to the ancient ones, he said. Rather than one or two extremely dry years that would suddenly throw the region into drought, dry conditions have been nearly continuous and the drought has built up over time.

“As of Year 5 this was looking like the beginning of a megadrought,” Dr. Williams said. “It’s developing right along the same path.”

Brad Udall, a water and climate research at Colorado State University who was not involved in the study, said that tying the current drought to a longer-term context “fits what a lot of people have been thinking.”

Dr. Udall said the researchers’ finding that climate change accounted for about half of the drought’s severity was strongly supported by his and others’ recent studies of the shrinking flow of the Colorado River, which attribute about half of the decline to global warming.

“I love the focus on soil moisture,” Dr. Udall said of the new study. “People underappreciate how important soil moisture is.”

Soils have a buffering effect that can allow problems of water scarcity to persist even after a relatively wet year, because soils that are dry from years of drought soak up more water that would normally run into rivers and streams.

The wetter weather in 2019, for example, resulted in a deep mountain snowpack across much of the West. “But it’s increasingly clear we didn’t get the runoff we had expected,” Dr. Udall said.

The latest ancient megadrought the researchers found was the long one in the 16th century. That finding reinforces the widely held idea that conditions were relatively wetter in the Southwest for centuries before the current drought.

Among other things, the rapid growth of the region’s population in the 20th century, and the agreements to divide water resources like the Colorado River, came at a time when water was more abundant than it is now and is likely to be in the future. “It’s become clearer and clearer that the 1900s were a bad time to develop, if you were going to develop all-out and use every last drop of water available,” Dr. Williams said.

But the finding also makes attributing the current drought to climate change more complicated, he said.

“How much could this just be a return to the long-term average?” he said. “Maybe there was something going on that we don’t understand that caused the last 400 years to be so much wetter.”

“All of this is just to say there’s still a lot of mysteries out there,” Dr. Williams said. “We don’t have the whole story of Southwestern hydroclimate nailed down.”