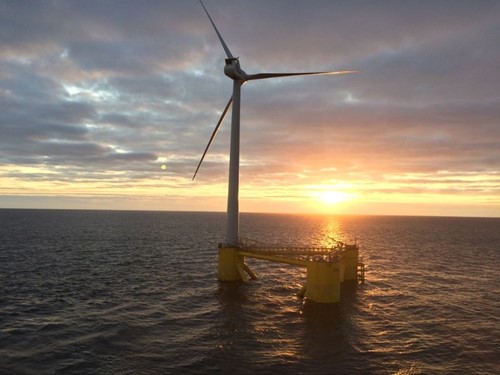 A new group has been set up to make sure Scotland’s energy supply chain companies benefit from new floating offshore wind projects in Scotland and the U.K.

The group has been formed as a subgroup of DeepWind, Scotland’s supply chain cluster. DeepWind is currently managed by Highlands and Islands Enterprise (HIE) to help cement Scotland and the U.K.’s role in the development of offshore wind. The new subgroup will be co-chaired by Dr. Andronikos Kafas from Ocean Winds (OW) and Julia Roope from Fugro and involves more than 200 members of the DeepWind cluster.

“We are excited to announce and co-chair the launch of the DeepWind FOW subgroup,” says Kafas, new offshore opportunities manager from Ocean Winds. “OW is committed to DeepWind’s success and support programs to bring developers closer to regional supply chain.”

Scotland is currently developing offshore wind with the Hywind project and the soon to be completed Kincardine wind farm. The combined capacity of these projects – at 80 MW – positions Scotland at the top of the floating offshore wind industry. With plans to scale up to commercial projects in the forthcoming ScotWind leasing round, Scotland will be a magnet for this emerging sector for some time to come.

The aim of the new subgroup is to develop close ties with centers of innovation, such as the Floating Offshore Wind Center of Excellence and the Carbon Trust’s Floating Offshore Wind Joint Industry Project. This will make sure the supply chain can be directly involved in the commercialization of new technologies.

Many of DeepWind’s 24 developer members are involved in both these innovation centers and form a bridge between the innovation systems and the supply chain with the new subgroup acting as a conduit. The subgroup includes many of the floating substructure technology companies from across Europe who are looking to demonstrate their systems in Scotland and the U.K.