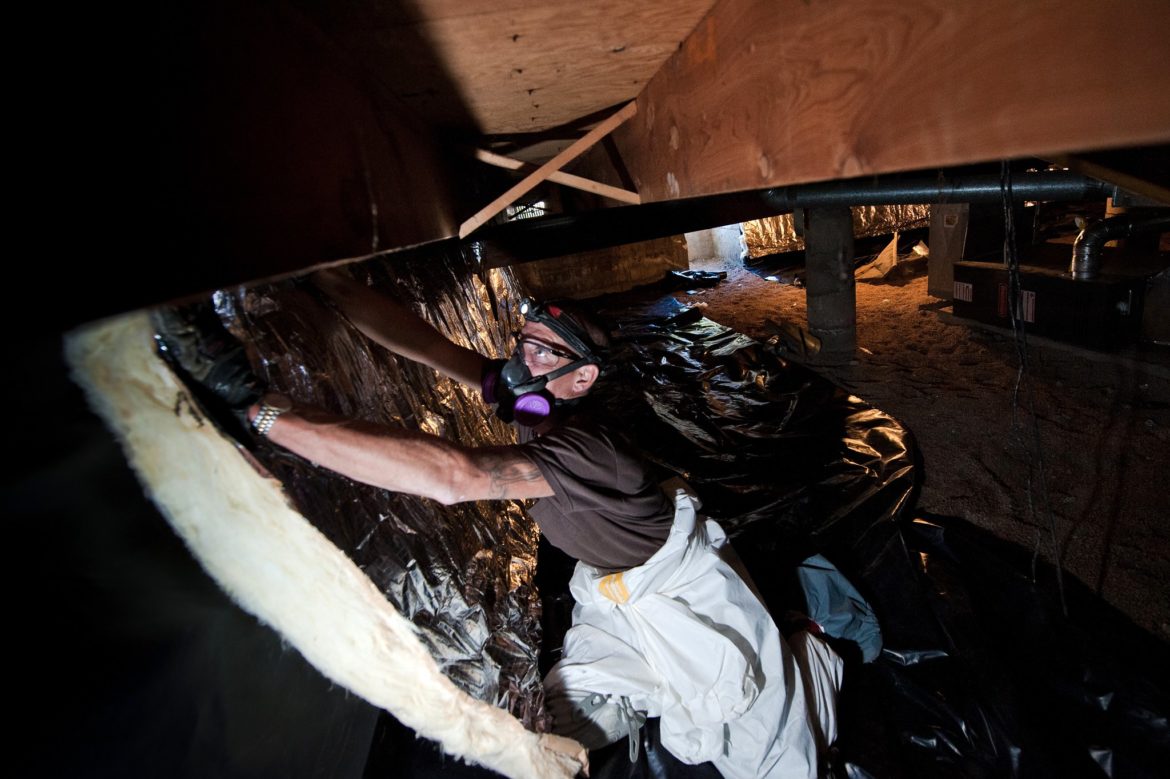 In this file photo, a weatherization worker puts moisture barrier and insulation into the crawl space of a home.

Diversification is Lee Householder’s top watchword. Sticking to that principle has allowed the CEO to hunker down and shield his nonprofit’s energy efficiency workforce while navigating these strange and stressful COVID-19 times.

With hands-on energy efficiency improvements halted, his Richmond-based Project:Homes has carried on by building and repairing homes, also at the core of its mission.

“We haven’t laid anybody off and were going to try not to,” said Householder, named its chief executive in January 2008 after leading a local housing authority. “We’re a strong nonprofit with a pretty robust reserve. We are fortunate that we have resources.” 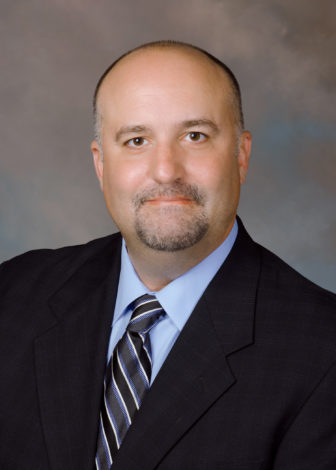 He has a master’s degree in urban planning from Virginia Commonwealth University.

The once-robust clean energy sector has been hit hard by the pandemic, shedding more than half a million jobs in March and April, according to one recent report. A majority of those job losses have come within energy efficiency.

The Energy News Network recently spoke with Householder about how he has guided his nonprofit during the looming threat of the novel coronavirus.

Q: First, your nonprofit covers many home-related angles. What is its origin story?

A: It was founded 28 years ago to focus on the well-being of senior homeowners so they could age in place. A volunteer board coordinated with the Capital Area Agency on Aging in Richmond (now called Senior Connections) to birth an organization called Elder Homes. That became a conduit to provide weatherization services with federal dollars.

That federal money was restricted to energy improvements, so we expanded into partnerships with local government entities to do home repairs.

Then, we organized a volunteer corps to take on projects such as yard cleanups, building handicapped ramps and doing basic maintenance for seniors. That expanded to provide full services for homeowners with limited means. Now, it doesn’t have age restrictions.

In 2006, we launched a homebuilding program for low-income residents and are now the largest nonprofit one in Virginia. And, we also own 330 units of low-income, senior apartments.

We changed our name to Project:Homes in 2011 because it fits with our motto of improving lives through improving homes. We’re well-rounded and somewhat diversified. About 70% of what we do is for people over age 55. That’s still our core.

Q: Can you give readers perspective on your volume of work in ordinary times?

A: Our low-income revitalization program built 24 affordable, energy-efficient homes in the Richmond region last year and completed 2,334 weatherization projects in the fiscal year that ended last June. The bulk of the weatherization was in apartments, about 2,000 of them, because that’s where the largest need is. Building owners don’t have an incentive to invest in energy efficiency, so we’ve been trying to ramp up the use of utility money and federal dollars to address multifamily apartments.

Q: On the energy efficiency front,  do you only serve Richmond and its nearby counties?

A: We’re now in 22 counties and nine cities. Most of our services are concentrated in central Virginia, but we also have branched out to the Hampton Roads region and the Eastern Shore of Virginia.

Referrals come to us through local governments. From there, in more normal times, we conduct a pre-screening to define a client’s needs. First, that involves an income qualification process. Second, we inspect a house to determine the critical needs. With weatherization, an energy audit is the most important part. So, if there’s a hole in the roof, that house isn’t going to qualify for weatherization. The third step is coordinating the work, which can involve installing or fixing air seals, air flow, insulation, ductwork and vents, and making sure you did it all safely.

Q: In pre-pandemic times, how many of your employees worked in energy efficiency?

A: We have a staff of 42, and all but three are full-time. Twelve directly staff our energy efficiency division and another four to five, including me, support that division. In total, that’s about 38% of the agency’s staff.

Q: As we discussed, the energy efficiency workforce has lost more jobs than any other clean energy sector. While statistics show Virginia hasn’t been slammed as hard as other states, how is your nonprofit managing?

A: We’re a charity. We have trucks and people. We can use this time to get our trucks in better shape and figure out ways to deploy people so we have properties at the ready when we resume that work.

We have avoided layoffs because we tried to get creative and move people around in different specialties. For instance, our energy efficiency folks are part of our planning team designing safety protocols.

In many ways we have been busier than ever, but not working in people’s homes or apartments. Inspections aren’t being done either, but we’ve tried not to miss a beat on income qualifications.

The work we have been doing for the last decade was to try to prepare us for the days we are having today. As a nonprofit, the question from potential funders is always, “How are you going to sustain yourself and your mission if we give you money today?” Our method is through diversification and real estate development as a tool for revenue growth.

Q: What is happening to the HVAC, electricians and other contractors Project:Homes relies on to complete its energy efficiency priorities?

A: That is a huge problem. We have a pool of eight to 25 prequalified contractors and we hire them for a year. Some were working in April, but finishing or catching up on work from February and March. Not doing work in April means not getting paid in May. This is the month they would start to feel it because the financial hardship lags.

Q: How did you manage early on when Virginia and other states started addressing the pandemic?

A: We closed for a week in mid-March so we could gather feedback about proceeding. No clients or contractors were allowed in the office. Then we varied schedules for our employees to figure out who would attend to duties such as picking up the mail and how people could retrieve chairs, printers, scanners and other necessities to improve the quality of working from home.

We’ve started a weekly newsletter to share information and include articles that spotlight staff members. I’ve also focused on mental health by organizing events such as digital happy hours.

This is our pattern for the foreseeable future.

Q: When we first spoke in early April, you talked about hoping for a July return to “normalcy,” but planning for September. Is that still the case?

A: Now I would say hoping for a September return but planning for January.

Virginia is reopening in phases, and we like the idea of considering our work in phases as well. This is phase one. In phase two, we would have increased office time and more work, but nothing compared to business as usual. I anticipate phase two will be lengthy one. It will likely involve flex time and keeping people connected. We’re not going to be able to figure all of that out right now, but it will be the new way in a world that will always be wary of a pandemic.

We have weekly meetings with the entire state network involved in energy efficiency. Ideally, we are going to make a decision by early June about finding a way to get back to work because that’s when our new fiscal year begins.

Q: Does the lack of weatherization income have you on edge?

A: We can survive three to six months. It’s hard for us to sustain nine to 18 months with the work that we have. I’m still optimistic we can get some of the weatherization going again.

In some ways, if you take the COVID-19 fear out of it, this isn’t much different from what we’re used to with payments. Our business has been accustomed to long delays in funding because of variabilities in LIHEAP (Low Income Home Energy Assistance Program) and electric utility money.

We have been able to build and sell houses because construction is seen as essential. That’s not slowing down. That has been wonderful because it has kept the revenue coming in.

We get a contract on a house as soon as we list it.

And we’ve been able to continue with small, exterior home repairs because subcontractors can practice safe distancing with projects like roofs.

Q: You mentioned the federal dollars and electric utility weatherization programs as your main sources of energy efficiency funding. Can you elaborate?

A: Combined, those programs account for $2 million to $3 million of our annual energy efficiency budget. The federal money is from the Department of Energy and also the Department of Health and Human Services, which administers LIHEAP. Those funds go to Virginia and are allocated through the state Department of Housing and Community Development.

The utility we work with on energy efficiency is Dominion Energy. It’s the big dog for us.

We receive that federal and utility money only after the work is completed and certified.

Q: How are those being affected by the COVID-19 crisis?

A: None of that funding should be in jeopardy. With Dominion, the delay is the biggest challenge because we are not going into people’s houses to do energy efficiency work. And while we would expect a lengthy delay, the money has been budgeted and is still there.

As a matter of fact, Congress recently included $900 million in LIHEAP funding nationwide. It’s not all for weatherization, but Virginia should be seeing an increase.

Q: That’s part of the CARES Act. On a related front, have you tapped into the federal Paycheck Protection Program?

A: We did it as kind of an insurance policy. We’re treating the $500,000 allotted to us as a loan and we’re going to use a portion of it. It’s a nice security blanket to help us feel a little stronger in a tough time. We will likely deploy $300,000 and give the rest back. In the short run, we thought it was worth having. The reason to apply is because you really don’t know the future. Why take chances in a world where this could go on for 18 months?

Q: Is this the hardest on-the-job challenge you have faced?

A: Yes, because of the uniqueness of the issue. With the lack of guidance and understanding, you have to determine your own take on this virus. Most people have diverse opinions about it, so as a leader it forces you to make tough decisions. Before, you could collaborate, have meetings and build consensus. Now, I’m doing this in a more isolated way, meaning I’m going to make the tough call and say this is how we’re going to do it. It’s more difficult make inspirational speeches and draw people together.

And, I’m going through it, too. I have to have a business as usual mindset, which over time is taxing. Sometimes we all have work and life challenges happening at the same time. That is hard enough, but this is that, times ten.

When we get (beyond this), we’re going to be stronger. I’ve heard it referred to as post-traumatic success. You lead with that attitude.”