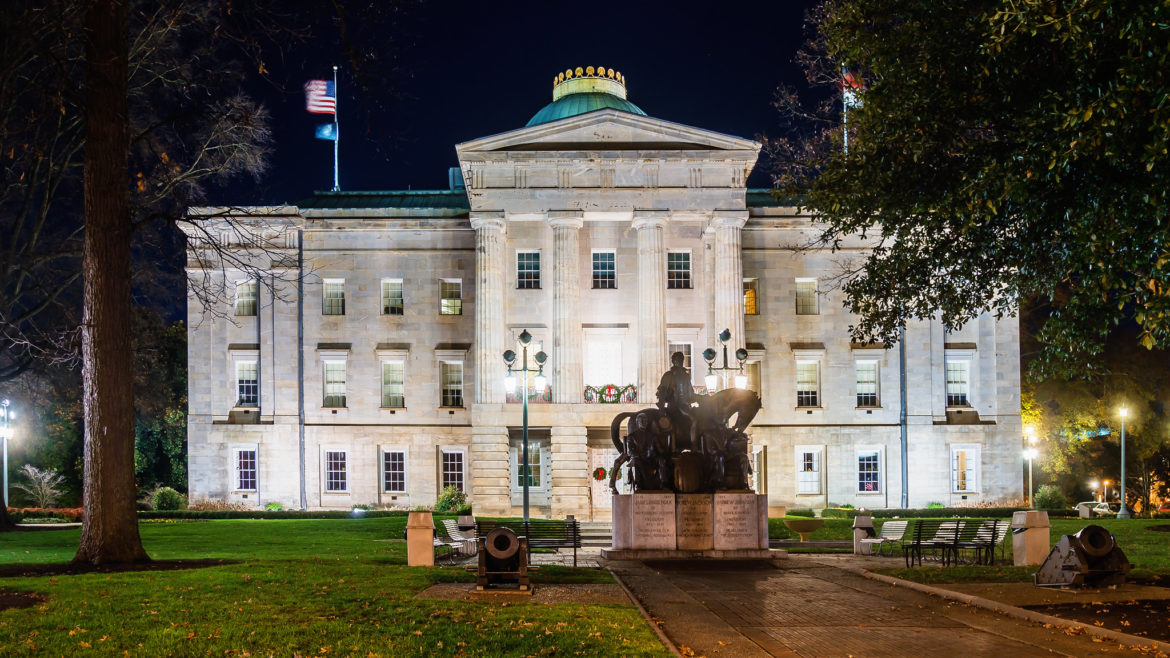 A bill to require state-run buildings to conserve electricity and water has been lodged in a Senate committee for over a year.

For the second year in a row, the North Carolina Senate is sidelining a popular bill that would require hundreds of state-run buildings to conserve electricity and water and keep the lights off at night.

Proponents say the pandemic makes the measure more relevant now than it was last year, since it would create clean energy jobs and improve indoor air quality by upgrading old heating, ventilating and air conditioning systems.

And because building renovations would be financed through bank loans backed by future energy savings, the bill would also save a quarter of a billion dollars over the next five years — helping to plug the state’s budget shortfall.

But after sailing through the House of Representatives with only two dissenting votes, House Bill 330 has been lodged in a Senate committee without so much as a hearing for over a year. And with both Republican-led chambers preparing to wrap up their short session in the coming days, the legislation shows no signs of moving.

“It’s very disappointing,” said Ryan Miller, executive director of the North Carolina Building Performance Association. “In a time like this, a good bill that puts hundreds of North Carolina citizens to work using private funding and saving taxpayers money should be viable.”

A small feature of H 330 drew a burst of attention last week when Travis Fain, statehouse reporter for WRAL, snapped photos of four fully lit state buildings at about 10:30 p.m. and shared them on Twitter.

“I have marveled here before at state government’s unwillingness to turn off lights at night in their buildings,” Fain tweeted. “But to leave them on during a pandemic, when a lot of these people are supposed to be teleworking … you almost have to take your hat off to it.”

I have marveled here before at state government’s unwillingness to turn the lights off at night in their buildings. But to leave them on during a pandemic, when a lot of these people are supposed to be teleworking … you almost have to take your hat off to it #ncga #ncpol pic.twitter.com/ivE8aeGRZ1

Fayetteville Republican Rep. John Szoka, the bill’s author, replied that his legislation was inspired by such scenes.

Witnessing this inefficiency many times during late night legislative sessions was the impetus for HB 330. We should be looking at every opportunity to curb government waste and inefficiency, especially right now. #ncga #ncpol https://t.co/8QftVg6U6u

A staffer for Rep. Jason Saine, a Lincoln County Republican, pointed out a seven-line provision, authored by his boss, that required lights off in state buildings between midnight and 6 a.m.

The language would surely have an impact. But the real thrust of the bill is a new target for state government agencies to reduce energy consumption, increased from 30% savings by 2015 to 40% by 2025. History shows the requirement can spur building renovations that will reduce energy use whether or not property managers forget to flip a switch.

‘It all works together very well’

The state has achieved and is holding steady at its 2015 goal, a report from the Department of Environmental Quality shows. Compared to a 2003 baseline, agencies have saved $1.3 billion in utility costs, more than they spent on new lighting, HVAC improvements, and other efficiency upgrades. And since state law allows government agencies to participate in energy performance contracts — in which energy service companies guarantee annual savings to finance and pay for upgrades — taxpayers saw those net benefits in real time.

The North Carolina Museum of Art in Raleigh is a case in point, said Tim Gasper, an engineer with Siemens who specializes in North Carolina government performance contracting. Temperatures and humidity were fluctuating so wildly in one wing of the building that the art was aging prematurely. The museum couldn’t host many national traveling exhibits.

“It was a very poorly performing system when we arrived,” Gasper said.

Overhauling the HVAC system was the solution. To pay for it, the state signed a $5 million, 12-year performance contract that also included lighting retrofits and a range of water conservation measures. After five years, the project had already saved $3.3 million, nearly half a million more than had been guaranteed. Plus, it saved the artwork, Gasper said. “It’s one of the greatest examples of what a successful project looks like.”

Multiply those examples, and the state could see savings that could help plug the multibillion-dollar budget hole brought on by the pandemic. The Department of Environmental Quality predicts H 330 would spur nearly $800 million in efficiency improvements at hundreds of prisons, university classrooms, and other state-run buildings, and deliver gross savings of $1.1 billion.

The bill could also give a needed boost to the energy efficiency industry, the portion of the clean energy economy hit hardest by the pandemic.

Miller estimated as many as 1,000 jobs could be regained because of the legislation, at no cost to taxpayers.

“The financing for the performance contracting program comes from very, very large banks that are still spending, still offering loans on construction projects,” he said. “The interest rates are historically low.”

Many renovations enabled by the bill could also help slow the spread of COVID-19, Miller said, including upgraded ventilation systems and measures to operate energy and water systems remotely.

Overall, Gasper estimates state agencies and universities spend $1 million daily on utility costs — much of it wasted. “Let’s take some of that and invest in the facilities, reduce carbon and improve the indoor environment,” he said. “It all works together very well.”

None of these arguments seem to have swayed Sen. Paul Newton, a Cabarrus County Republican and former Duke Energy president who is a frequent arbiter on clean energy policy in the Senate. He didn’t respond to inquiries for this article, but many believe he’s the reason the bill hasn’t moved. Last year, he told the Energy News Network he simply didn’t think it was necessary.

Because of the performance contracting law, that may be true to a degree. The Museum of Art project, after all, was initiated in 2005, before the first goal was adopted in 2007. And Gov. Roy Cooper’s executive order on climate directs the agencies within his purview to cut their energy consumption 40%.

But the agencies Cooper controls are just a subset of those covered in H 330, and advocates say commitment to energy retrofits varies across different government institutions.

“The more leadership from legislators, and the more goals and mandates that are set, the more work gets done,” Gasper said. “This is over my 17 years in North Carolina and my 37 years overall in the business. There’s really no exception.”

Though the part-time legislature could adjourn its regular short session as soon as this week, the door hasn’t completely closed on H 330, said Peter Ledford, general counsel for the North Carolina Sustainable Energy Association.

“We expect at least one special session between now and the end of the year,” Ledford said. “There’s still time to get it over the finish line.”