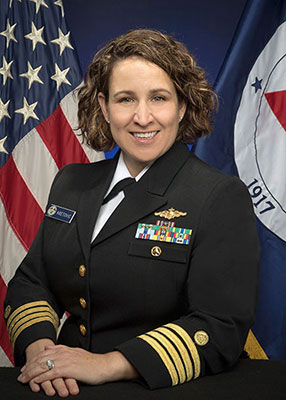 Kretovic recently retired from the National Oceanic and Atmospheric Administration (NOAA) after a 21-year career with the agency. Most recently she was the Deputy Hydrographer in NOAA’s Office of Coast Survey.

“Elizabeth had a stellar career with NOAA and brings extensive offshore experience, knowledge and a passion for the ocean environment that we are excited to have here at Ørsted, she is a fantastic addition to our team” says John O’Keeffe, head of marine affairs at Ørsted U.S.

In her role as deputy hydrographer, she managed NOAA’s precision navigation program. This role allowed saw her coordinate closely with the U.S. Coast Guard, U.S. Navy, U.S. Army Corps of Engineers and commercial maritime stakeholders. Kretovic’s career with the NOAA saw her serve in several roles including, as a commanding officer for the NOAA ship Hi’ialakai.

“I’m thrilled to be joining Ørsted during such an exciting and promising time for the U.S. offshore wind industry,” says Kretovic.

With Kretovic’s addition to the Marine Affairs team, she will bolster its Mid-Atlantic maritime community outreach efforts as Ørsted’s Ocean Wind and Skipjack projects move closer to the construction phase.