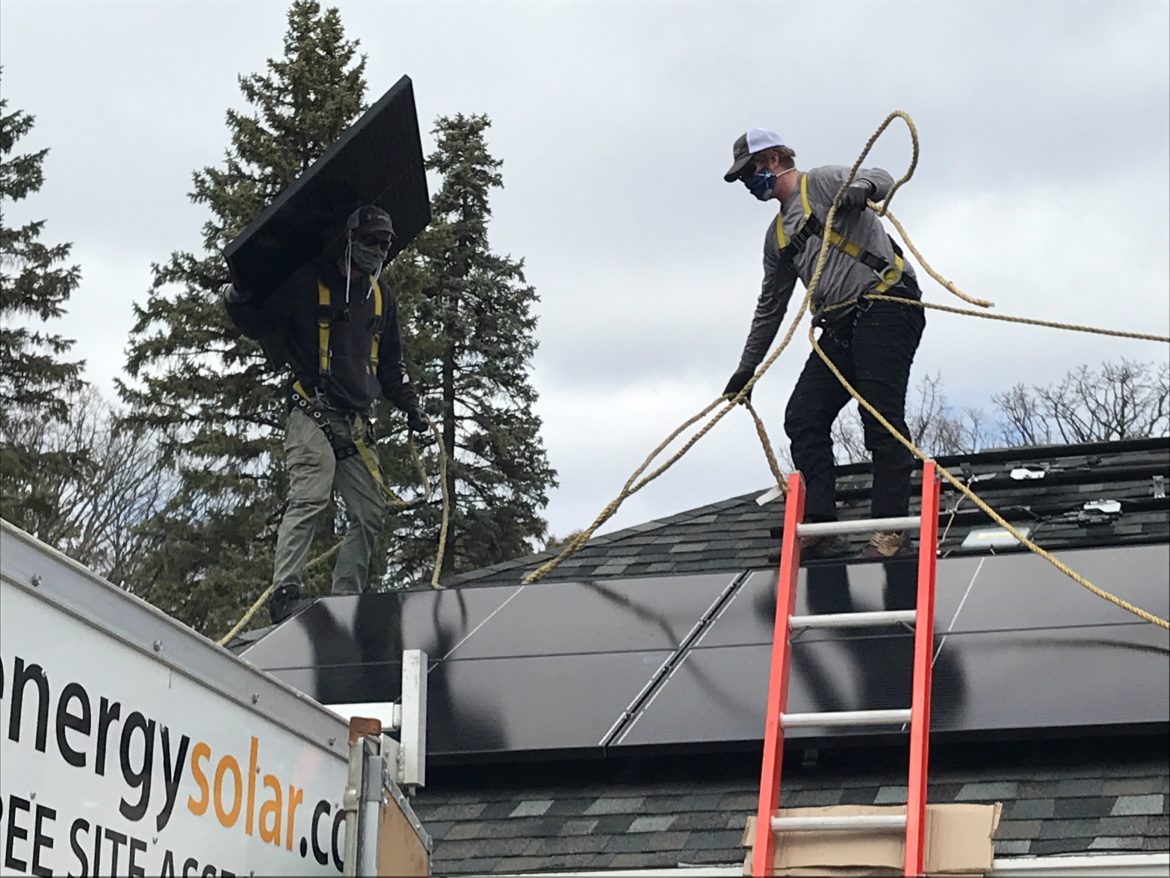 Installers with All Energy Solar work on a roof.

Crews are equipped with masks and gloves and practicing social distancing at — and on the way to — job sites.

Minnesota solar installers say they have been able to continue work on rooftops with only limited disruptions so far from the coronavirus pandemic.

Gov. Tim Walz’s emergency executive order requiring Minnesota residents to stay at home permits some businesses to stay open, including those in the energy sector. Solar companies are included under the exemption.

“We have had one of the most relaxed governor orders in the country,” said David Shaffer, executive director of Minnesota Solar Energy Industries Association. “Minnesota has had it pretty easy when it comes to installing projects.”

The association provided members with a downloadable letter should enforcement agencies question their status. It did not give specific advice on managing COVID-19 risk, but many installers practice social distancing and require employees to wear personal protective equipment, he added.

Solar companies have been working throughout the pandemic, but more installers moved people into the field in April after the governor’s order clarified solar as an “essential service.” It’s also traditionally a month when the industry gets busy with crews in the field, Shaffer said.

The problems installers anticipated have not materialized. Local governments have continued to provide staff to conduct on-site solar inspections, Shaffer said. Installers have reported no difficulty getting supplies and their distributors have not predicted any shortages. The cancellation or delay of large solar projects both in the United States and abroad could even create a glut of panels that might drive down prices, Shaffer said.

The solar industry in Minnesota still faces the specter of more clients canceling installations and the end of two popular programs homeowners used to make solar more affordable. The federal investment tax credit ends in 2022 for residential customers, and Xcel’s Solar Rewards incentive program finishes in 2021. It could be “a rough year” if homeowners and businesses decide to cancel projects, he said.

Still, 2020 might not turn out to be that bad a year, Shaffer said. Last year community solar developers spent much of the year completing projects that were approved in 2018. This year developers will likely spend the first two quarters filing the paperwork to try to get projects approved before the end of the year.

Minnesota annually determines how much community solar developers will be paid for electricity through a complex formula called the “value of solar.” Last year’s value, lower than 2018, led developers to propose fewer projects. The rate increased enough this year to encourage more construction. 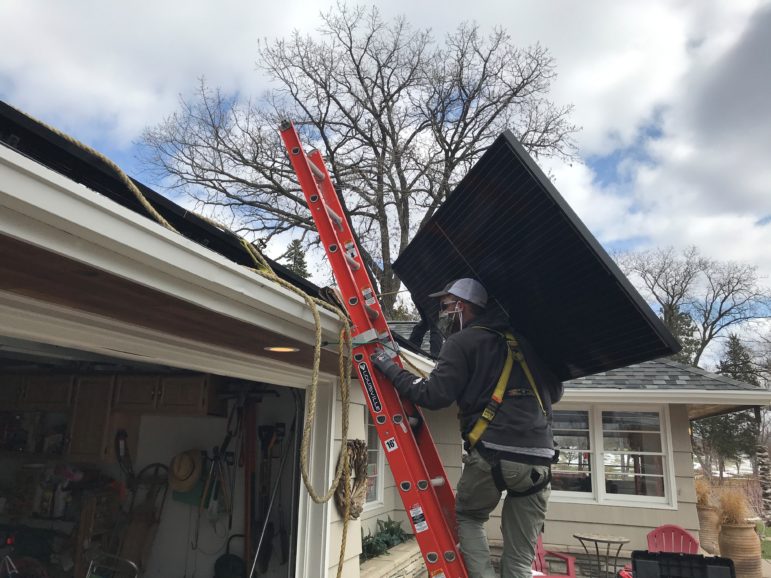 The view from the field

Solar companies say they enforce social distancing and require workers to take precautions while working in the field. Nearly all office-based employees work from home. IPS Solar chief development officer Eric Pasi said that in “an abundance of caution,” the company provides workers with thermometers to check their temperatures before coming to work. They cannot share rides with other employees to job sites, now a common practice in the industry in Minnesota.

Once at the job, the company gives them masks, gloves, wipes and hand sanitizers, all precautions other solar installers say they follow, too. Solar installations, especially on larger projects, can be sequenced to separate employees. “Safety is our number one concern,” Pasi said.

Michael Allen, a co-founder of All Energy Solar, said the company imposed “strict safety protocols” at installation sites, in the office and warehouse. His workers came with their face masks or coverings after the company donated its stock to local health officials.

All Energy Solar plans to only perform exterior installations on homes that can be connected without any of its employees having to enter a residence, he said. Later, Allen hopes to complete in-house connections.

Marty Morud, president of TruNorth Solar LLC, brought furloughed workers back in mid-April after state officials gave more clarity on the state-at-home order. Before projects begin, the company interviews clients, to ensure they have no coronavirus symptoms or contact with anyone who does. TruNorth allows installers to enter homes as long as they wear booties and masks, Morud said.

Rob Appelhof, CEO and president of Cedar Creek Energy, said he had crews working since the governor announced the first stay-at-home order. The company recently received attention for two large projects now underway in the Twin Cities’ suburbs and continues residential installations. Social distancing and smaller crews are part of the new COVID-19 environment, he said.

Some customers, including a couple who both work in healthcare, have put residential projects on hold, but others have signed up for installations even during the stay-at-home order, Appelhof said.

“We’ve seen a steady flow of projects coming in the last few weeks,” he said. “On the residential side, some people just looked at the situation and thought ‘am I going to put money in the market right now?’ or ‘am I going to take this money and put it toward not having a utility bill in the future?’”

Pasi believes more projects may come later this year from clients who want to take the 26% tax credit before it drops by 4% next year. A dip in demand in Asia for panels has led to a robust supply chain in Minnesota, he said.

Solar companies say a handful of larger projects have been put on hold, but most installations have been going forward. Allen said that without a re-opening plan announced yet by state or federal authorities, he decided to create a simple one: All Energy Solar will focus entirely on installations requiring only exterior work.

The solar installers say they have not laid off or furloughed workers and Allen said the company added a small number of additional employees. None of the solar companies complained of supply chain disruptions, nor did they anticipate any this year. All Energy Solar has on order enough supplies to last almost through fall, Allen said.

Installers have found prices falling, as Shaffer noted. Appelhof said he had seen a significant decrease, as much as 15%, for modules. Other parts of the supply chain may be more problematic. A component used on larger projects, produced in coronavirus-ravaged Spain, now takes twice as long to get to the United States, he said.

At least business continues, for now. “It’s slowed development, but it hasn’t stopped it, and we think it will recover when people get back their to-do list,” Pasi said. “We’re cautiously optimistic for the rest of the year. Social distancing will potentially slow the speed in which we operate, but it won’t stop it. I think we’ll hit most of our targets for the year.”

Appelhof thinks solar could have an essential role in a recovery. “Clean energy was such a fast-growing job market before I think it will be an important part of re-stimulating the economy once this is done,” he said.