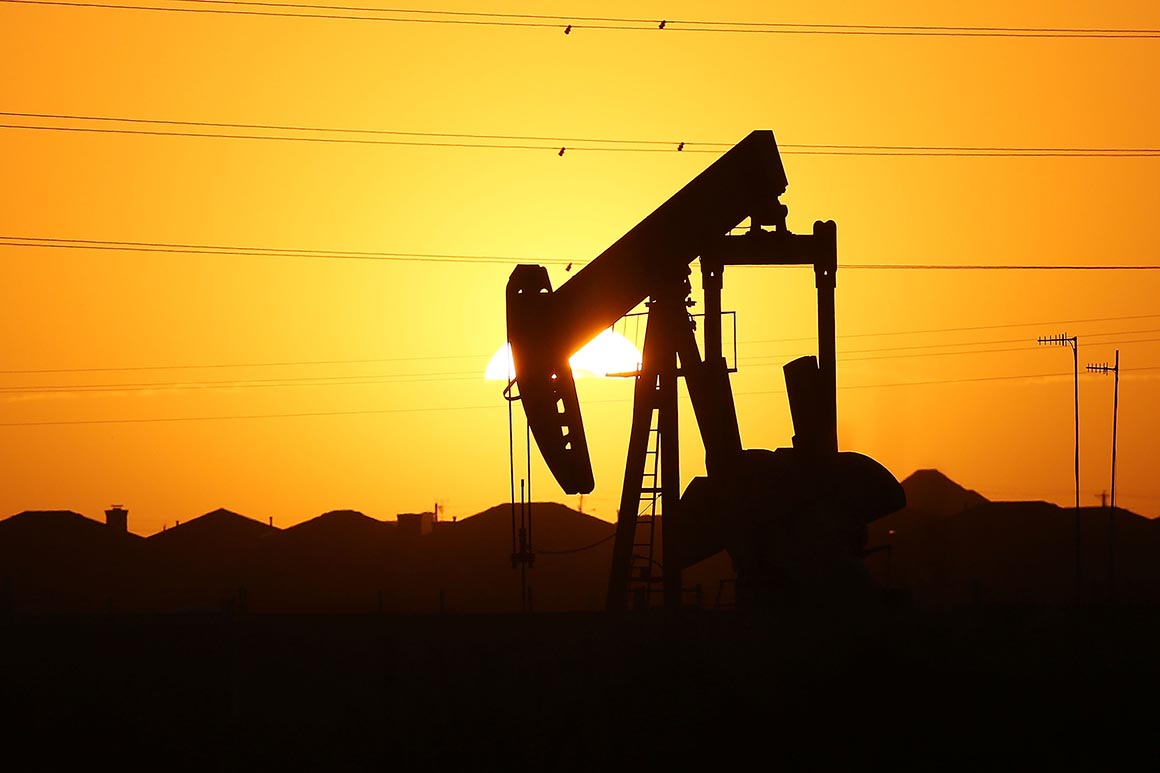 A pumpjack in the oil town of Midland, Texas. Texas has been the biggest contributor to U.S. oil output growth over the past decade. | Spencer Platt/Getty Images

Independent U.S. oil companies suffering from the meltdown in crude prices are pressing President Donald Trump for financial help, but the political blowback is likely to thwart any significant action to help the industry.

But offering aid to the industry that lifted U.S. oil production to a record levels last year and has benefited from substantial deregulation under the administration — and opened up its checkbooks for Trump’s reelection — is a tough political sell. Critics have already taken to social media to blast the potential move as a “ShaleOut” and mock the executives asking for aid as advocating socialism.

Even top Republicans on Capitol Hill have said they don’t see the need to help the oil industry.

“I don’t think they need any bailouts,” said Sen. John Cornyn (Texas), whose state has been the biggest contributor to U.S. oil output growth over the past decade.

The push for federal action to help the industry is being led by independent oil producers, not the majors like Exxon Mobil or Chevron, which are better able to withstand the price shock. Those independent companies have racked up debt in recent years as soft prices have narrowed their profits, even as they increased their output from fields in states like Texas, New Mexico and North Dakota.

U.S. oil prices have crashed by nearly 50 percent since the beginning of the year as the Covid-19 pandemic has cratered energy demand. That oil market selloff has triggered a price war between Saudi Arabia and Russia, who are battling to win market share from each other — and the U.S. shale producers whose oil has begun to flow to markets around the world.

Conversations with more than a dozen Senate Republicans showed that most said it was too soon to make any decisions to help the industry, and that any action would depend on how long the price war between Saudi Arabia and Russia persists.

“I don’t think that any sector-oriented bailouts are appropriate,” Sen. Pat Toomey (Penn.)

The White House declined to comment on measures it may be considering to help the industry. Trump spoke this week with Saudi Crown Prince Mohammed bin Salman partly to discuss “energy market volatility,” though the White House would not reveal what was discussed.

Trump has so far not signaled publicly any desire to help U.S. oil producers, and his comments have focused more on how drivers would benefit from the lower oil prices.

“Good for the consumer, gasoline prices coming down!,” he tweeted on Monday.

Jason Bordoff, head of the Center on Global Energy Policy at Columbia University and a former Obama administration energy official, said if Trump were to press OPEC and the Russians to back off their production, it would be in contradiction to his previous criticism of the oil cartel.

“POTUS has taken to Twitter again and again to attack OPEC countries for withholding oil from the market,” Bordoff said. “The idea we now need to bail out the industry because OPEC countries have decided to follow that advice seems rich with irony.”

Still, some lawmakers and members of the industry are trying to appeal to Trump’s trade protectionist instincts, and are portraying the Russia-Saudi sales as a direct attack on U.S. oil companies that amounts to illegal dumping.

Sen. James Lankford (R-Okla.) said he had talked to Trump about what he called an “intentional act of economic warfare from the Russians that we should take seriously.”

Lankford said he hadn’t suggested any measures yet, but was preparing to take some to Treasury Secretary Steven Mnuchin and National Economic Council Director Larry Kudlow.

“We’re working on a list of proposals on it,” Lankford told POLITICO. “I’m asking the White House to do the same to be able to have proposals to be able to deal with it. But this is not about propping up our industry, it is about getting back to a normal market.”

Industry sources on Wednesday floated a number of ideas, including having the government buy up oil to store in the Strategic Petroleum Reserve, speeding up permitting for drilling on public land and slapping anti-dumping duties on oil from Saudi Arabia and elsewhere.

Oil tycoon and Trump ally Harold Hamm told Bloomberg TV on Wednesday he intended to file a complaint with the Commerce Department over what he called Saudi Arabia’s “illegal” dumping of oil onto the market.

But others in the industry doubted those measures would work either politically or economically. The amount of oil that the U.S. could add to the strategic reserve would be “a drop in the bucket“ compared to the flood of supply hitting the market, one industry representative said. And any move to ease permit rules would likely be tied up in courts, others said.

Representatives from some oil companies said perhaps the most important thing the White House could do was to handle the coronavirus outbreak, since the quarantines, canceled flights and other disruptions have sent demand for oil plummeting.

Members of the oil industry are well aware of the political risk the sector would be asking the White House to take to try to prod oil prices higher.

“It’s insane that these oil and gas companies are going in and saying low prices are the problem,” said one industry official not authorized to talk on the record. “Politicians hate high oil prices. Their imagining they’re going to get sympathy for this is completely devoid of reality.”

Trump tried to sell the idea of helping the industry to Senate Republicans at a caucus lunch on Tuesday. Rather than offer specific options, though, he portrayed the problem as one of Russia and Saudi Arabia bullying small U.S. oil companies.

“I didn’t hear any specific remedies,” Sen. Steve Daines (Mt.) said of Trump’s lunch talk. “So we discussed the problem, but the remedies at this point I think are to be determined.”

Sen. Lindsey Graham (S.C.) said some lawmakers, including Lankford and Sen. John Hoeven (N.D.), told Trump and administration officials that “the Russians are trying to break the back of the American shale oil industry.”

“They were listening intently,” Graham added. “You can talk to them about their response, but that was something that I hadn’t really thought that much about until the lunch. I don’t want the Russians to be able to get away with destroying their competition here.”

Democrats for their part have no appetite for any sort of financial assistance for an industry they blame for its part in causing climate change. When asked in an interview about whether the oil sector should receive any aid, Minority Whip Dick Durbin (D-Ill.) let out a sustained laugh.

Democrats said their focus would be on increasing testing capacity for the coronavirus and providing for working people that must stay home in the event of a sustained period of quarantine.

“The oil industry has a better chance of surviving a downturn than the average person out there trying to survive,” said Sen. Joe Manchin (D-W.Va.), ranking member of the Energy Committee.

John Bresnahan contributed to this report.