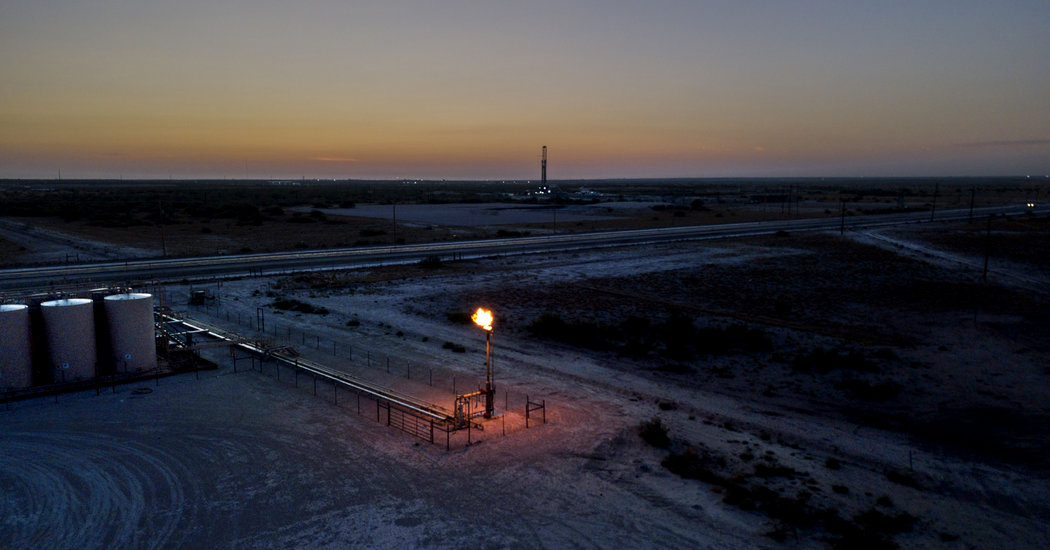 HOUSTON — The once mighty oil industry is shrinking quickly around the world, hunkering down in survival mode.

With the coronavirus pandemic all but eliminating travel and commutes, demand for energy is tumbling, and oil companies from Algeria to West Texas are slashing budgets. Refineries are cutting production of gasoline, diesel and jet fuel. Pipeline operators are telling producers that they can ship crude only if there is a buyer willing to take the fuel because storage tanks are filling up fast. And American oil companies are dropping rigs, dismissing fracking crews and beginning to shut down wells.

As much as 20 percent, or 20 million barrels a day, of oil demand may be lost as the global economy slows, according to the International Energy Agency. That is roughly equivalent to eliminating all U.S. consumption. To make matters worse, Saudi Arabia and Russia are increasing oil production to regain market share from American oil companies that increased production and exports in recent years.

The Trump administration has been trying to convince Saudi Arabia and Russia that they should cut production to help stabilize the oil market; President Trump and President Vladimir V. Putin of Russia discussed energy markets in a call on Monday. But the energy demand destroyed by the virus now overshadows anything that Saudi Arabia or Russia could do to reduce exports.

Global oil benchmark prices hover around $20 a barrel — levels not seen in a generation — and regional prices in West Texas and North Dakota have fallen even further, to around $10 a barrel. That is about a quarter of the price that shale operators typically need to cover the costs of pulling oil out of the ground. If these prices persist, a big wave of bankruptcies is inevitable by the end of the year, experts say.

“The picture looks bleak,” said Trent Latshaw, president of Latshaw Drilling, an oil service company active in Texas and Oklahoma with only 10 of its 41 rigs currently deployed. “We have never had this situation where you have a huge increase in supply and a huge decrease in demand at the same time. Oil prices are down to $20 a barrel, and we don’t know where the bottom is.”

All told, global investments in exploration and production are expected to fall in 2020 by $100 billion, or 17 percent below last year, according to Rystad Energy, a research and consulting firm based in Oslo. That drop is only the latest jolt to an industry that has been tightening budgets for years. The $446 billion that the industry is expected to invest is just over half the $880 billion it spent on exploration and production in 2014.

The share prices of large companies like Exxon Mobil, ConocoPhillips and Chevron have nearly halved in recent months, while the stocks of smaller firms with less healthy balance sheets have fallen even more.

In ordinary times, a big drop in energy prices would be a boon to consumers, who would have more money left over after filling up their cars and trucks. But many people have nowhere to drive to, and gas stations report that sales have plummeted, even as the national average price of gasoline has tumbled to less than $2 a gallon, according to AAA. Refiners are shutting down several gasoline distillation units on the Gulf of Mexico because demand is so weak.

The crisis may only be just beginning. The U.S. rig count last week was 728, down 44 from the week before, according to Baker Hughes. In Texas, the biggest oil-producing state, 368 rigs were operating on Friday, compared with 491 a year ago. Mr. Latshaw said those numbers could go down by another 300 or more by the time the oil price hits bottom.

Occidental, Chevron, Pioneer Natural Resources, Parsley and other oil companies are sharply cutting operations in the Permian Basin of Texas and New Mexico, the epicenter of the U.S. shale-oil production boom. Schlumberger and other large service companies are cutting and furloughing thousands of workers.

The situation is no better elsewhere in the world. With more oil than they can possibly sell, major producing countries like Nigeria, Brazil, Ecuador, Angola and Canada have only a few weeks of storage available before pipeline systems back up and production has to be curtailed.

The Algerian state oil company, Sonatrach, is planning to halve its spending to $7 billion. Brazil’s Petrobras is slashing its spending by more than 25 percent, and its offshore partners Royal Dutch Shell, Exxon Mobil and Equinor of Norway are cutting as well. Large global oil companies, like Shell, Total of France and Eni of Italy, are averaging spending cuts of 20 percent in their global operations.

Even Saudi Arabia and Russia — which helped to spark the oil price collapse with their recent moves to increase, rather than cut, production — are vulnerable to the demand shock produced by the pandemic. There may be fewer buyers for the extra oil those countries are producing.

The fallout will be severe for oil-producing developing countries that finance social programs with oil revenues. Mexican Maya crude is already selling on American markets for under $10 a barrel for the first time in over two decades, undercutting Colombian and Ecuadorean producers struggling to break even.

Energy experts say profit margins for a small, though increasing, number of older wells have morphed into losses, so that companies cannot even cover fixed costs. Under those circumstances, it makes no sense to produce oil, and those wells will have to be turned off completely — a process that is expensive to reverse and sometimes damages wells.

“There is no precedent for the scale of potential shut-ins,” said Fraser McKay, a vice president at Wood Mackenzie, an energy research and consulting firm. “The industry’s ability to keep higher-cost barrels flowing will be severely tested.”

At particular risk are the hundreds of small private American oil companies that have as few as a handful of wells, or as many as a couple of hundred. They were highly profitable when oil prices were $100 a barrel or more. These companies are the backbone of rural communities in states like Oklahoma, Texas, Louisiana and Montana. But now they could be a big liability for local economies because they may not be able to repay loans to regional banks.

Ms. Wallace said she shut down two wells late last year as oil prices began to slide and would shut eight of her remaining 19 wells on Tuesday. She said many other producers were in worse shape because they had borrowed money in recent years to buy wells for what they considered low prices. She has been paying off debts and cutting payroll and other costs since oil prices fell in 2014.

There may be no solution for those operations, along with dozens of larger private and public companies, said Raoul LeBlanc, a vice president at IHS Markit.

“We’re going to have a whole lot of consolidation with a lot of small players going broke or joining together to try to stave off their debt situations, reduce their expenses and survive this,” Mr. LeBlanc said. “There’s literally no room to put the oil.”