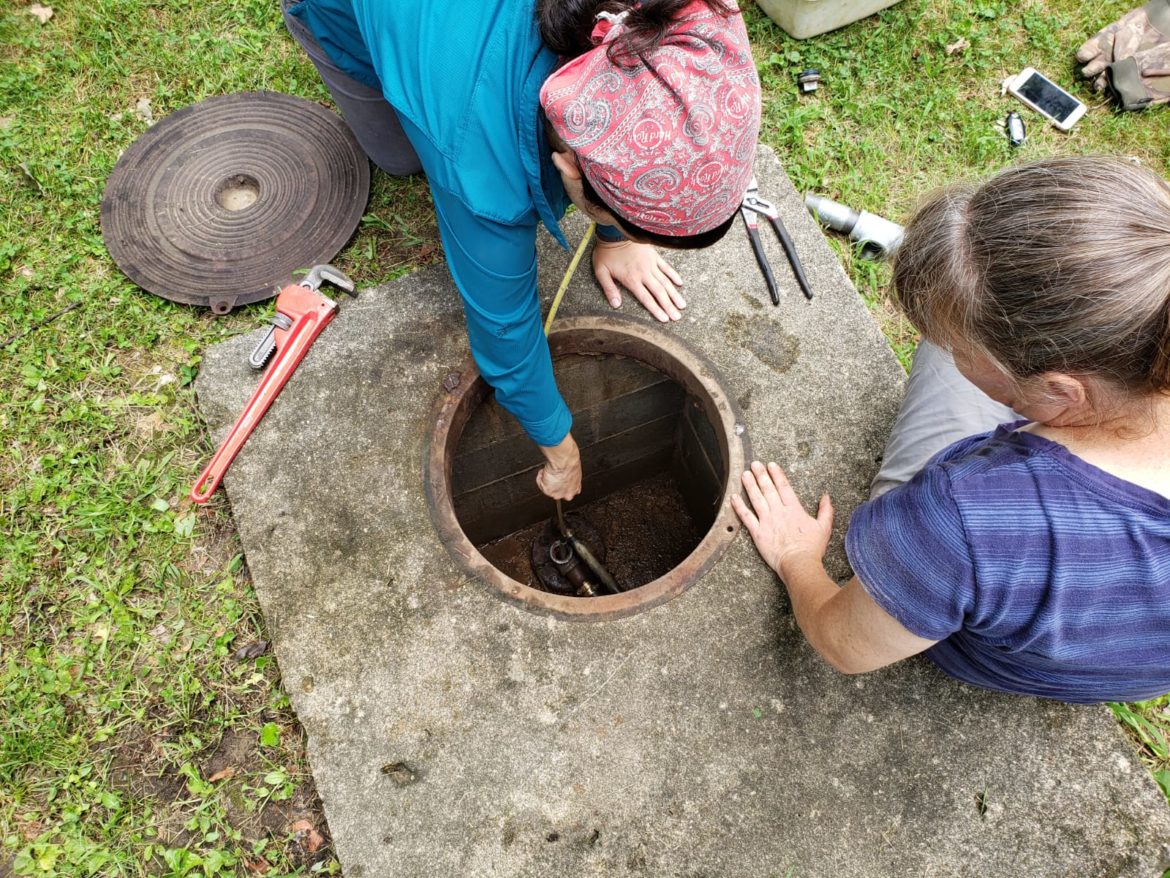 Geologist Andreana Madera-Martorell takes measurements at an existing groundwater well near the mine she studied, with help from Nora Sullivan, environmental specialist at Ohio University’s Voinovich School of Leadership and Public Affairs.

The research at Ohio University could help transform old fossil fuel sites into clean energy assets, though much work remains to be done.

Geologists at Ohio University are exploring the potential to turn abandoned coal mines into sources of carbon-free heating and cooling.

Ohio is home to thousands of abandoned coal mines, which have become both public safety and environmental hazards as they leach acidic pollution into nearby waterways.

“We have a horrible legacy of acid mine drainage in Ohio that has destroyed the life in streams,” said Ohio University geologist Dina López, who has studied the problem for more than a decade.

Lopez also has long studied issues related to geothermal energy at locations in both the United States and in El Salvador, where she grew up. That work led her to explore the possibilities for flooded coal mines. Those mines generally don’t present acid drainage problems, because oxygen doesn’t react with sulfides. And Ohio has lots of those sites.

Geothermal systems take advantage of steady below-ground temperatures, usually by circulating fluid through a closed loop of pipes that run underground and then up through buildings on the surface. In the winter, the fluid is warmed as it passes underground. In the summer, it’s the reverse. 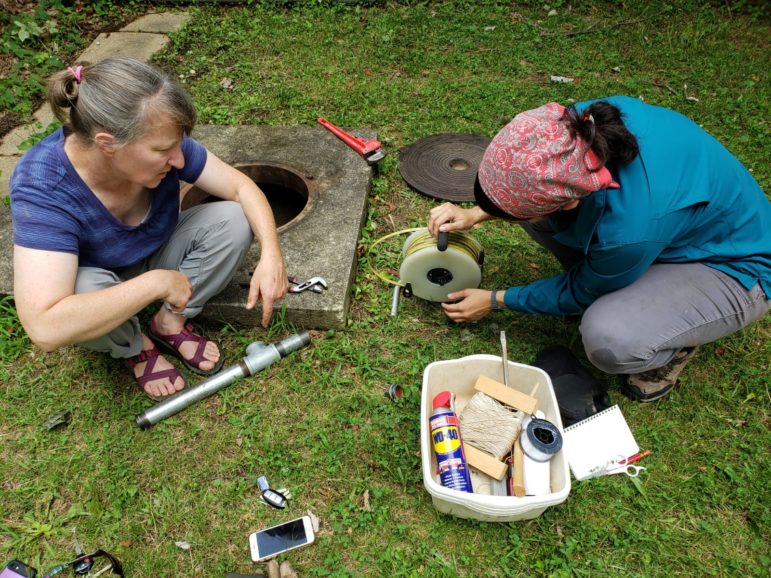 One mine at a time

Geologist Andreana Madera-Martorell worked with López and others while she was a graduate student to estimate the potential for energy from ground-source heat pumps for one flooded coal mine site. She presented the work at the Geological Society of America’s 2020 conference in October.

The specific mine, located between Athens and The Plains in Ohio, sits roughly 99 meters below the surface. It’s one of 131 old, mostly flooded coal mines in the state that López’s former graduate student Joshua Richardson previously identified as candidates for geothermal energy production. Other old mines brought the total to 147 potential sites spanning 21 counties in Ohio.

“There’s so many abandoned, not being used at all,” Madera-Martorell said. “They’re just taking up space.”

While Ohio has even more old coal mines, the feasibility for geothermal energy calls for geographic proximity to a potential user. A facility probably shouldn’t be located right on top of a mine, due to the potential for subsidence. On the flip side, “there’s no use in using a mine that’s five miles away,” Madera-Martorell said. As the distance from the mine increases, so would capital costs for the piping system, along with losses in heating or cooling capacity.

The mine Madera-Martorell studied sits within a feasible distance from a high school and from a couple of buildings on Ohio University’s campus in Athens. For her study, she took temperature and flow measurements at existing groundwater wells near the mine she studied. The data let her model the hydraulic flow through the mine below.

The mine could “definitely” be a worthwhile source for energy, Madera-Martorell concluded. The heat exchange wouldn’t be sufficient for all of Ohio University, but it could completely replace heating and cooling for several buildings, she said. “Further studies can conclude if Athens High School can benefit as well, since it is a smaller building and it is very near from mine AS-029,” she added.

The work is primarily academic so far, and it’s unclear whether Ohio University or the high school would go ahead with the project. The university has already committed to becoming carbon neutral, but not until 2075. Researchers at various other schools and universities have also been looking at ways to reduce their carbon footprint or become carbon neutral. 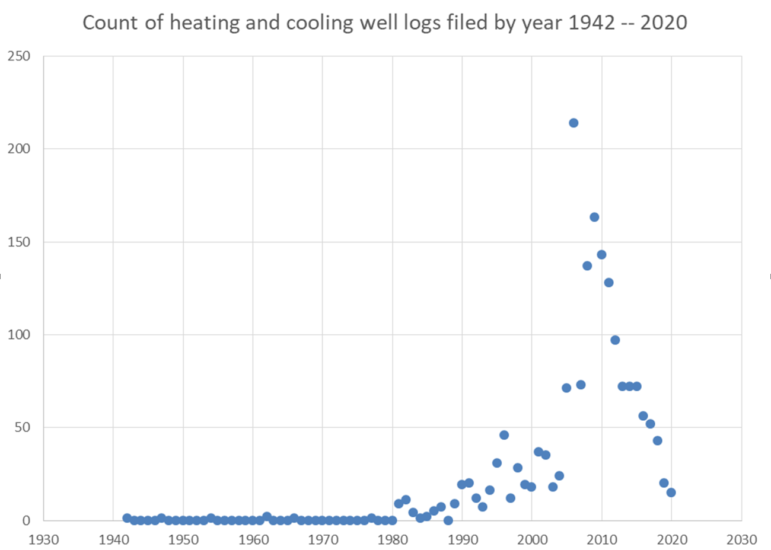 A graph provided by Ohio Department of Natural Resources geologist Frank Fugitt shows the number of heating and cooling well logs filed between 1942 and 2020 in Ohio.

Geothermal energy in Ohio today exists mostly as heating and cooling solutions for residential and medium-scale facilities, such as hospitals, college dormitories and warehouses, Fugitt said. “Your neighbor may have a geothermal system, but you are probably not even aware of it because they are quiet, clean and relatively maintenance-free.” 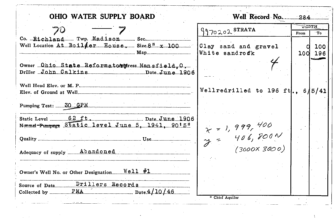 A 1906 well log record from the Ohio Department of Natural Resources shows a Richland County women’s prison was likely one of Ohio’s first moderately sized facilities to use ground-source cooling.

A Richland County women’s prison was likely one of Ohio’s first moderately sized facilities to use ground-source cooling, a 1906 well log record shows. Logs for vertical heating and cooling wells exist for more than 1,800 sites in the state. Some horizontal ground loop sites exist as well.

Ohio geothermal well installations peaked at 214 in 2006, when coal and natural gas prices were high. The economics become more challenging when fossil fuel prices are cheaper and when states don’t have renewable energy standards. Just 20 systems were drilled in each of 2019 and 2020.

The work by López, Madera-Martorell and Richardson provides important insights into the geology and energy resource potential of flooded mines, Fugitt said. However, “much work needs to be done, especially at understanding the geotechnical challenges.” Those include the establishment of siting criteria, water chemistry analysis, and consideration of possible impacts on surrounding layers, including chemistry, thermal effects, and subsidence potentials.

Nonetheless, Fugitt said, “the use of flooded abandoned underground mines has significant potential. These mines are large and have a large effective volume” for heat exchange. Just as significantly, many of those old mines “exist in close proximity to communities that were economic centers during coal’s peak production.”

“Facilities that have large footprints and low electrical demand, such as schools, record archival facilities, warehouses, and possibly even indoor agricultural producers, could all benefit from constant temperatures” provided by geothermal heating and cooling solutions, Fugitt said.

“In the long term, I’m also thinking of the impact on the environment,” López said, noting her concerns about ongoing climate change. Using geothermal to offset some fossil fuel use could reduce carbon dioxide emissions that drive the problem.