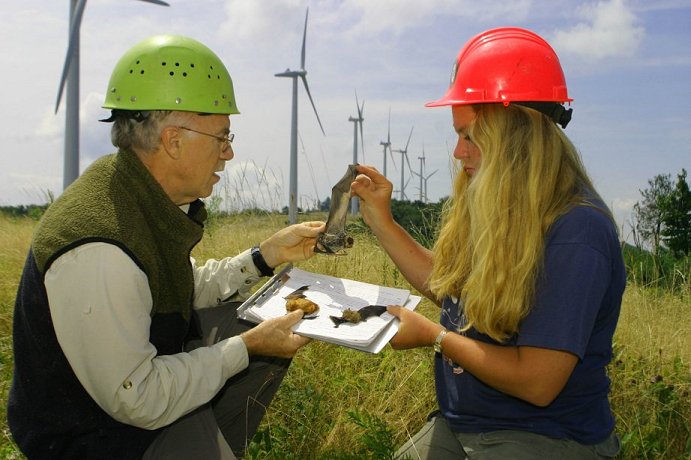 As wind energy installations increase, so does the potential impact on various wildlife species, including bats. Based on available data, migratory tree-roosting bats, such as the Eastern Red Bat and the Hoary Bat, are at the highest risk, though much is still unknown regarding bat interactions with wind turbines.

In 2003, DOE and other wind energy stakeholders helped form the Bats and Wind Energy Cooperative (BWEC) to promote and coordinate the study of impact drivers and mitigation solutions for bat fatalities around wind farms. In subsequent years, BWEC-related researchers found that increasing the wind speeds at which turbines begin producing power allowed them to avoid operating during lower wind speeds – when bats are at greater risk. This curtailment method could reduce mortality by 50% or more, but the associated loss in power reduction was costly to turbine operators.

In 2006, researchers identified ultrasound as a potential deterrent for bats around wind turbines. In 2009, BWEC funded the first wind turbine test of an ultrasonic bat deterrent, developed by Deaton Engineering. The device was composed of eight electrostatic transducers (or speakers) installed in a box mounted at different locations around the nacelle of a wind turbine. Results were mixed due to the hardware limitations of the speakers, but the technology showed significant reductions in overall bat fatalities at operational wind turbines.

While the results of this study showed continued improvement, it also found that some species of bats, such as the Eastern Red Bat, did not exhibit the same response and corresponding mortality reduction compared with other species. NRG Systems is currently working with NREL to refine the ultrasonic signal produced by the device to better target individual high-risk species of concern.

While operating wind turbines can still pose a threat to bats, the deployment and utilization of ultrasonic deterrents show promise in reducing risk, particularly in low wind-speed areas where the cost of curtailing wind turbine operations could affect the financial viability of a wind farm. DOE and wind industry stakeholders continue to invest in the development of ultrasonic deterrent technologies – to improve deterrent effectiveness among certain species of bats – and to develop innovative ways of extending the ultrasonic signal to cover the entire wind turbine blade.

DOE is also supporting other approaches to protecting bats at wind farms, including optimized curtailment strategies that minimize energy loss while protecting bats, in order to provide wind energy stakeholders with a broad toolbox of proven, effective and affordable bat impact mitigation options.