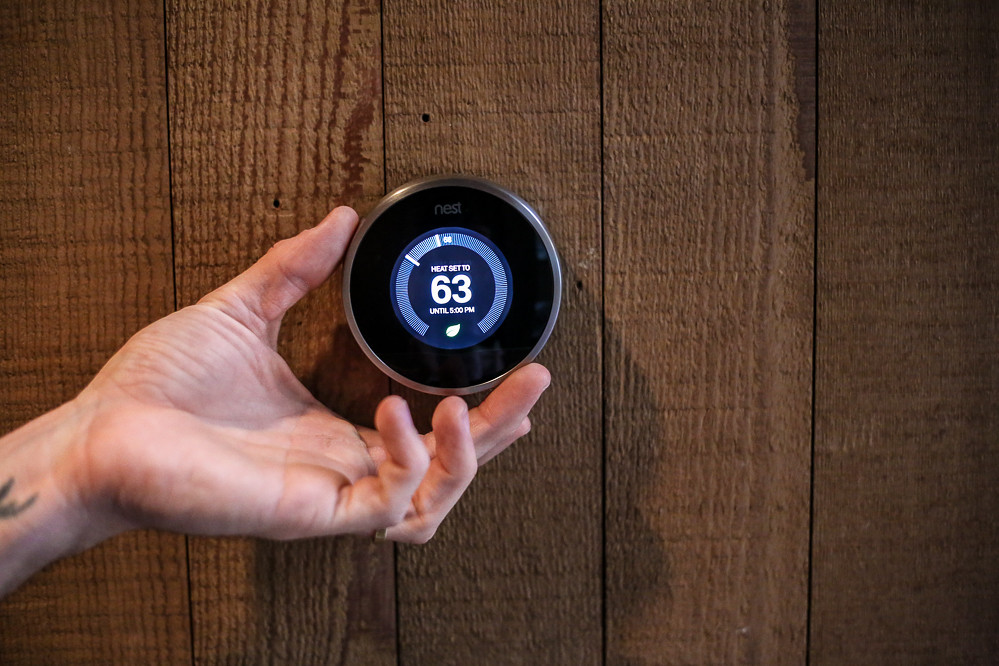 Smart thermostats, like this one, and battery storage are among new active demand response programs included in a three-year energy efficiency plan from New Hampshire’s electric and gas utilities.

The utilities have submitted a new three-year efficiency plan that proposes to significantly ramp up spending to help customers conserve energy.

Supporters say an ambitious new energy efficiency plan in New Hampshire will save customers money, even as utility commission staff worry about paying for it during the pandemic.

New Hampshire’s electric and gas utilities submitted a three-year energy efficiency plan to the Public Utilities Commission in early September. The plan sets new energy savings goals for 2021 through 2023 and is the culmination of 10 months of stakeholder discussions. It will now undergo an expedited discussion process so it’s finalized to go into effect Jan. 1.

Aside from the utilities, the plan has wide support among advocacy groups including Clean Energy New Hampshire and the Acadia Center, as well as the state’s consumer advocate, who say the long-term savings will outweigh the immediate rate increases.

Most importantly, they say, the plan sets high energy savings goals that will push the utilities to innovate and develop new programs to meet those goals.

The proposed three-year plan includes energy savings of 5% of the electric utilities’ 2019 delivery sales, up from 3.2% in the 2018-2020 plan. This would result in about 6.7 million megawatt-hours saved over the lifetime of the installed measures, according to the utilities. It means funding of more than $350 million for the new plan, compared to about $154 million for the current one. Natural gas energy savings would be 3% in the new plan compared to 2.1% now, with funding of about $41.9 million, up from $31.4 million.

“Once you set ambitious goals, you get new programs, new measures,” said Madeleine Mineau, executive director of Clean Energy New Hampshire. “The program administrators have to get more creative,” she added. “That’s what we’re looking for, is to dive deeper into more advanced energy efficiency.”

She said the proposed plan includes new programs, notably an energy optimization pilot with heat pumps, “which we would like to see become a full program.”

The pilot is based on a program run by the New Hampshire Electric Cooperative, one of four electric utilities participating in the statewide plan, as well as other states’ offerings. It would allow eligible customers to use cold climate air-source heat pumps to replace their fossil fuel-based heat sources.

The pilot, which would be available for 100 customers per year, will provide “a more comprehensive understanding and experience of the benefits of heat pumps to the electric system, as well as the impact on emissions from [greenhouse gases] and nitrogen and sulfur oxides,” according to the plan.

Mineau also noted that new active demand response programs, like smart thermostats and battery storage, are included in the proposal as well.

New Hampshire has lagged its neighbors on energy efficiency, she said: The state ranked 20th in the U.S. — and last in New England — in the most recent energy efficiency scorecard from the American Council for an Energy-Efficient Economy. “This would help us make up some of the ground that we’ve been lagging far behind,” Mineau said.

“The savings goals are kind of the big rising factor of the whole plan, but in order to achieve those savings goals, there are a number of elements to the plan that I think are really important,” said Kate Peters, an energy efficiency spokesperson at Eversource, New Hampshire’s biggest electric utility. Eversource covers 70% of the state’s customers.

One important aspect of achieving those savings goals going forward will be to move beyond lighting efficiency, especially with commercial customers. LED lights are becoming more common, “so we also need to be working with those customers to identify other things they can do” — such as new refrigeration and motors, Peters said.

“We want to be encouraging our customers to not just do one piece of the project, but to look at all of their energy savings options and to be encouraging them to do those things as a package as much as possible,” she said.

The new plan is truly a three-year plan, Peters said, unlike the current one, which she and Mineau both said is more like three one-year plans. So while each year has target goals in the new plan, it’s the overall end goal that’s most important, Peters said. It also means the budget would be approved for the entire plan, rather than annually.

This structure could give administrators more flexibility for planning: If some goals can’t be met in the first year, for example — a possibility during the pandemic — utility leaders can make up for those shortfalls in the coming years. Alternatively, Peters said, if things are going well, the plan would allow administrators to keep programs going without worrying funding will end when the year is done.

The increased budget would mean rate hikes for customers. In addition to regional funding sources like the wholesale capacity market and proceeds from the Regional Greenhouse Gas Initiative, the state’s electric customers pay a monthly line item on their energy bills that provides most of the budget for efficiency programs.

The potential for this charge to rise during the pandemic was a source of concern for commission staff during the initial proceedings. It’s expected to be the sticking point as the docket proceedings on the official proposal begin.

“I think the challenge is to balance the short-term rate impacts with the long-term benefits,” Mineau said. “And we respect that, but there’s very strict benefit-cost tests. So by ensuring that every dollar of that budget that’s invested … returns more benefits than costs, we feel that that is a very smart investment.”

“And there are some benefits that aren’t even fully captured in our view” by the benefit-cost analyses, she added.

The utilities commission declined to comment, citing the open docket. Currently, there is a motion before the commission for two commission staff members who were involved in the original discussions to be designated as “advocates.” This would prevent them from advising the commission on whether to accept the plan or not.

The motion, brought by the consumer advocate along with Acadia Center and Conservation Law Foundation, argues that the staff, who made their opinions clear during discussions, can’t be objective when advising the commission. A decision has yet to be made on that motion, but proceedings will move forward in the meantime either way, said D. Maurice Kreis, the consumer advocate.

“I think it’s a question of long-term versus short-term rate effects, and in general I think that I am more interested in making sure that in the long term we achieve savings for customers and all the related benefits of energy efficiency,” Kreis said.

The coming months will make for a faster timeline than originally planned. The pandemic hit just as the utilities were finalizing an initial draft of the plan, and it sent them back to the drawing board. Still, it has to be approved by the end of the year.

“It is what it is,” Kreis said. “The pandemic has wreaked havoc with about everything that everybody does, so this is part and parcel of that.”