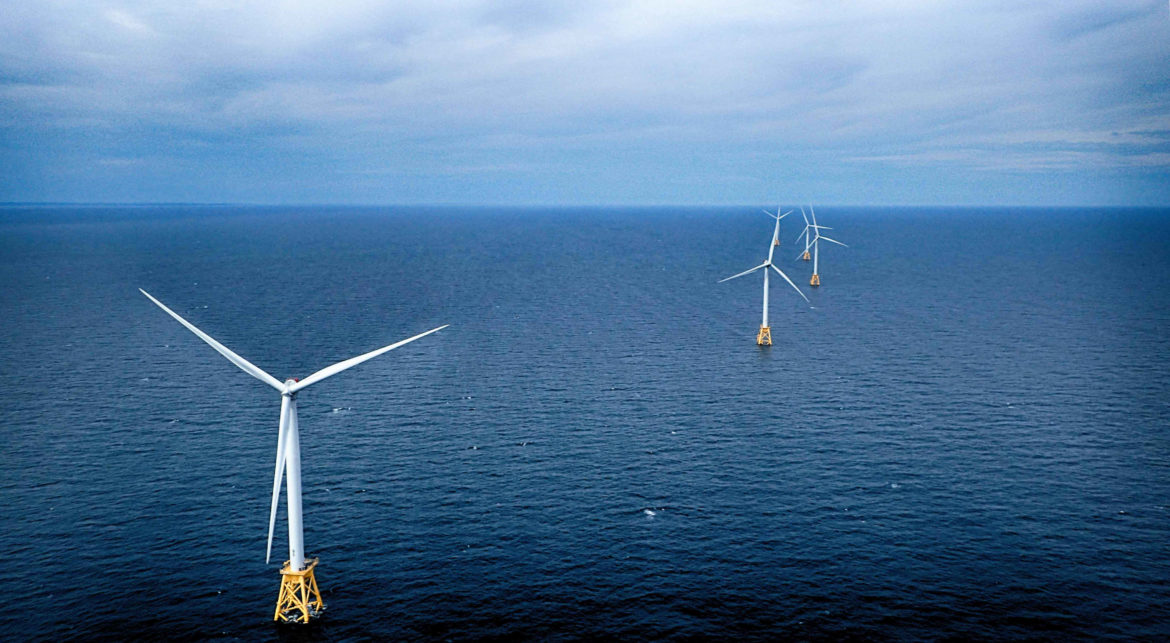 The Block Island wind farm off the coast of Rhode Island was the nation’s first offshore wind project.

As politics and the pandemic stall offshore wind permitting and planning, New Hampshire sees a window of opportunity to bring its plans for the industry into focus.

Offshore wind advocates in New Hampshire are hopeful that a new commission can help the state catch up with its neighbors in planning for the industry.

With federal permitting on hold and a regional task force tabled due to the pandemic, New Hampshire has a window to gain ground on states farther along with their offshore wind workforce and infrastructure efforts.

“We have a lot of catch-up to do,” the panel’s chair, state Sen. David Watters, said at its first virtual meeting Sept. 21, “and getting this commission passed and then getting going will really help us be in a better shape to do what needs to be done when the Gulf of Maine task force starts again.”

The 24-member commission was formed as part of an omnibus bill (HB1245) signed by Gov. Chris Sununu in July. It brings together lawmakers, clean energy advocates, state officials, marine industry stakeholders and researchers to discuss concerns and opportunities for offshore wind in New Hampshire.

The panel will brief lawmakers on what’s expected to be a rapidly developing industry. Key issues include job development and investment needs, as well as coordination with the fishing industry and coastal communities. The commission can eventually consider whether contracts with developers and utilities would help the state deliver affordable electricity to customers.

The process will be the first chance for New Hampshire to hear from experts and gather public input, said Michael Behrmann, director of business development at Clean Energy New Hampshire and the vice chair of the commission.

Behrmann was elected to the vice chair position at the commission’s introductory meeting. He and Watters recently coauthored a newspaper op-ed on the state’s opportunity for the offshore wind industry.

“Until this point with the commission, we haven’t had a lot of public opportunity for these discussions,” Behrmann said in an interview.

The executive order last December came just ahead of the first meeting of the Intergovernmental Renewable Energy Task Force. That group, convened by the federal Bureau of Ocean Energy Management, brings together officials from New Hampshire, Massachusetts and Maine, all situated on the Gulf of Maine and working to push the offshore wind industry forward. It was convened after a request to the Bureau of Ocean Energy Management from Sununu.

The interstate group hasn’t met since then, and the governor’s advisory boards haven’t met yet either because of the pandemic. It’s uncertain when either initiative will move forward.

The commission by law is required to submit an annual report to the governor and legislature beginning in November, but a full report likely won’t come by then, Behrmann said. That timeline was based on a proposal from the beginning of the year that also expected this group to supplement the governor’s advisory boards, and the situation since then has changed dramatically.

Still, the industry is on the brink of exponential growth. According to Behrmann, this is the time for New Hampshire’s stakeholders to figure out how the state can fit into both the region’s and the country’s offshore wind economy.

“Admittedly, in my opinion, New Hampshire is a comparatively small state, but it has a lot of resources it can bring to bear,” he said.

He didn’t want to speculate before the commission’s work got started on what specifically New Hampshire’s niche might be, but he pointed out that the Gulf of Maine is a different market than those further down the Atlantic Coast. Its deep waters make floating turbines necessary, giving local industry a potential leg up to lead development of that new technology.

During the meeting, Matthew Mailloux, the energy advisor at the state Office of Strategic Initiatives, noted that northern New England is “export constrained” — it has more generation than transmission capacity to get power to southern New England.

Investments in new transmission, or use of existing lines, could make New Hampshire an important player in getting power to the rest of the region, he said. “We’re in a unique position here in northern New England, but still great potential if we can maximize the opportunity.”

Behrmann said that New Hampshire may be competing for job opportunities with Maine and Massachusetts, but he would like to see a collaborative process with those states. “Admittedly that hasn’t begun yet, but I think we’re all going to do much better if we take that collaborative approach.”

“As people who know the state understand, we don’t tend to be the frontrunner in leading on new industries necessarily,” he said. “We have a bit more of a methodical approach of viewing what’s best for the state in this way.

“So while we may not be the tip of the spear, we’re very thorough. And when an industry takes hold in the state, it remains. … And we think that’s going to be important to developers and the industry moving forward, that once we’re committed, we’re committed for the long haul.”

The commission plans for monthly meetings going forward that will include discussions and presentations from stakeholders. As multiple people said during the meeting, the industry is evolving rapidly and members have various interests and levels of familiarity. The group’s leaders will have to figure out how to get everyone on the same page and which issues are important to prioritize.

Members generally agreed that workforce development and jobs are a priority. This industry has high job potential, something that’s important during COVID, Behrmann said. The pandemic “has touched on every component of our economy, but I think in terms of this particular industry it may have actually created more opportunity and focus” since it’s not simply bringing jobs back but is actually creating new jobs.

“This is a new industry, not just for New Hampshire but in the U.S.,” he said. “Right now the sky’s the limit.”