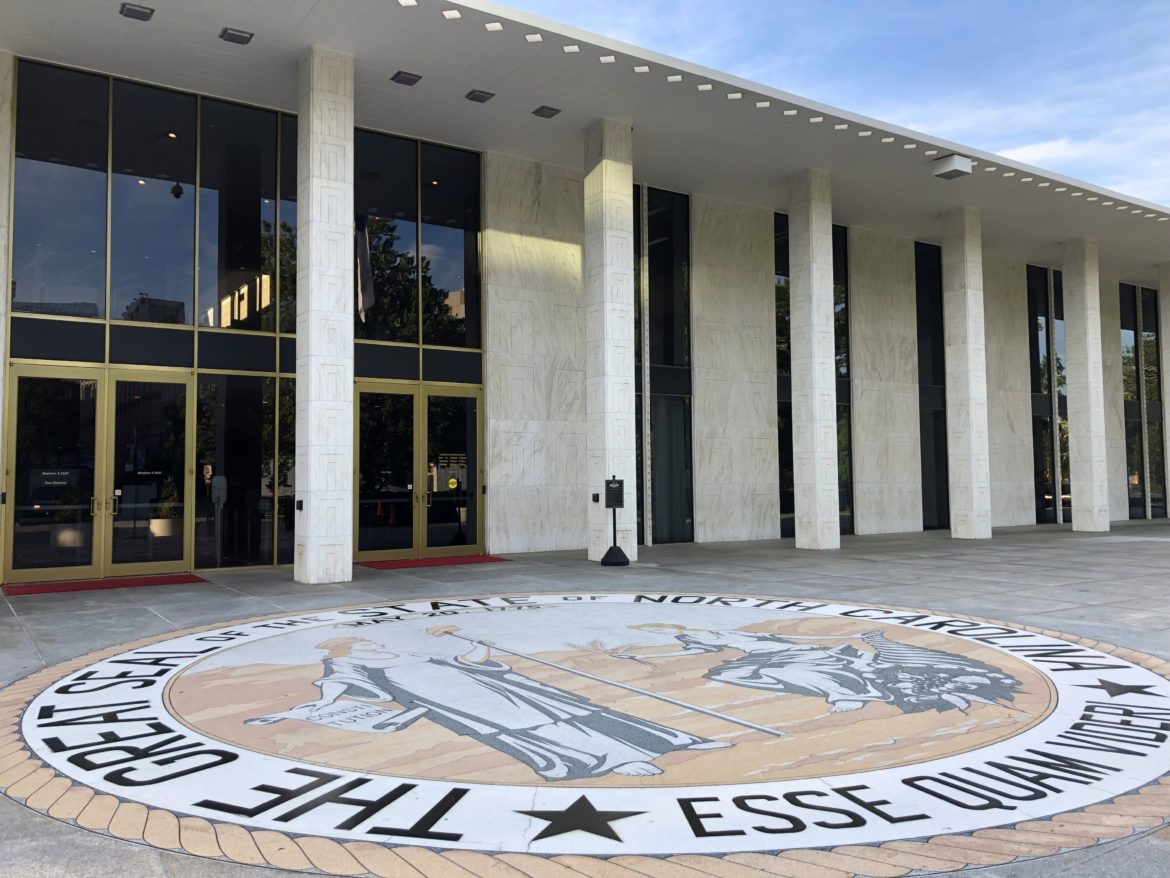 Climate activists failed to flip the state’s legislature, but the politics and economics of clean energy leave an opening for action — so long as Duke Energy is on board.

The results of North Carolina’s state legislative elections were an undeniable blow to climate activists — who tried to help Democrats win a majority but lost seats instead — and a smashing success for Duke Energy, which through its PAC invested heavily in Republican incumbents and didn’t lose a single contest.

The outcomes mean the General Assembly won’t enact the full-throated, economy-wide response to the climate crisis that activists had wished for.

But many clean energy businesses and nonprofits remain hopeful about their chances next year — in part because Democratic Gov. Roy Cooper won a second term and his party retained enough seats to uphold his vetoes.

“This is effectively the same status quo that we’ve had for the last two years,” said Peter Ledford, general counsel for the North Carolina Sustainable Energy Association.

In fact, with Duke under mounting pressure to help stem global warming and renewable energy increasingly cost-competitive, many organizations still have their sights on policy that could lock in near-term carbon pollution reductions of up to 70% in the utility sector.

Most of these clean energy groups stayed neutral on the question of who controlled the legislature in the run up to Nov. 3, focusing instead on helping renewable energy champions from both parties.

Even in the current era of intense tribalism, many believe such bipartisanship is both possible and far more likely in Raleigh than in Washington, D.C., where Democratic President-elect Joe Biden’s ambitious climate plans could well be limited by a Republican-controlled U.S. Senate.

And with time running out to sharply curtail the planet-warming emissions that are making flooding and hurricanes worse in the state’s coastal plain, advocates said state-level progress is all the more necessary if Senate Republican Majority Leader Mitch McConnell of Kentucky retains his gavel.

“Climate change isn’t going to wait for us to get our house in order,” Kelly said. “We’ve got communities that are already feeling the impacts today.”

‘The next 12 months are going to be really exciting’

The biggest factor driving the potential for bipartisan policy was set in motion by the state’s top Democrat. As a follow-up to his 2018 executive order on climate, Cooper’s administration last year issued a clean energy plan calling for 70% reduction in carbon emissions from the utility sector by 2030 and net zero emissions by midcentury.

The goals — roughly consistent with what scientists believe is necessary to prevent the most extreme impacts of global warming — have spawned an array of working groups, in which experts from clean energy businesses, low-income advocates, utilities, customers and other stakeholders hash out policy ideas.

Their discussions have focused on solutions that solve more than one problem. To cut carbon pollution, for example, Duke could retire coal units that cost more money to operate than they earn. Legislation allowing Duke to retire the plants early and recover their costs through ratepayer-backed bonds — a tool known as securitization — would shutter the plants without extra costs on ratepayers or investors.

To be sure, Duke’s proposed regulatory reforms have been met with widespread opposition so far. In 2018, the utilities commission rejected the company’s request for ongoing cost recovery for a multi-billion-dollar grid upgrade scheme. Last year, a bipartisan group of lawmakers scuttled a bill that would have allowed the utility to seek multi-year rate increases on the front end of its investments, rather than the backend.

But critics of these proposals say they could work if they were tied to clean energy and equity benchmarks. Duke could invest in an electric grid that’s not only easier to repair, for example, but is also more resilient to extreme weather and better fosters distributed generation and battery storage. To build its asset base, the company could undertake construction of large-scale wind farms off the state’s coast and the massive transmission infrastructure needed to transport that wind power inland.

At the same time, multi-year ratemaking could go hand in hand with decoupling utility profits from the volume of electrons sold. A system of performance-based ratemaking could incentivize efficiency and reduce electricity demand, benefiting low-income customers.

“All those types of options are there to try and create a package,” said Al Ripley, director of the Consumer, Housing and Energy Project at the North Carolina Justice Center.

“Regulatory reform is really focused on how can we incent the development of this critical infrastructure and the associated reduction in carbon,” Good said in response to a question. “Things like multi-year rate plans are being discussed, decoupling is being discussed. Performance-based ratemaking would be another thing that I would point to you — because you can tie achievement of certain outcomes to performance-based ratemaking.”

Around the end of the year, stakeholders will present proposals to Cooper for both cutting carbon and reforming utility regulation. After that, the focus will turn to the legislature, where advocates will press for legislation that reflects their discussions.

“We’re getting to the point where pen to paper is going to start happening,” said Maggie Clark, government affairs director with Asheville-based solar developer Pinegate Renewables. “The next 12 months are going to be really exciting for energy policy in North Carolina.”

Painstaking consensus among major stakeholders has been a hallmark of North Carolina energy policy. A 2002 law ratcheted down smog- and soot-forming pollution from Duke and then-Progress Energy’s coal-fired power plants with the utilities’ support. Five years later, legislators adopted a renewable energy mandate that also allowed Duke and Progress to recover some preliminary costs for building nuclear plants. In 2017, legislation to spur more rooftop and utility-scale solar — while reducing independent solar power producers’ leverage when selling energy to Duke — passed after months of negotiations.

All these measures cleared the General Assembly nearly unanimously. The latter was adopted while Republicans maintained supermajorities in both chambers.

“So much of that was motivated by the desire to take advantage of a least-cost resource,” said Tyler Norris, development director for Cypress Creek Renewables, on a webinar convened this week by the Sustainable Energy Association. “Those underlying dynamics haven’t changed —  if anything, all those dynamics have further improved.”

According to an August report from the association and national nonprofit E2, the clean energy economy supports more than 100,000 jobs in the state overall, a quarter in rural counties and 15% in the state’s most economically distressed areas. Another study from the North Carolina group found that county property tax revenue increased an average of nearly $19,000 after a solar farm was built.

If the economics bolstering clean energy have improved, so, too have the politics. For years, polls have shown broad support for renewable energy and increased competition, even among the state’s most conservative voters. Now, surveys show they’re also accepting climate science.

A recent poll commissioned by nonprofit Conservatives for Clean Energy showed only 13% of Republican voters believe global warming will never cause any adverse impacts.

“Four in five Republicans in North Carolina either believe climate change is already affecting things, or it’s going to affect things sometime in the future,” said Dee Stewart, a Republican pollster with Strategic Partner Solutions, during a presentation of the poll’s results.

“You’re talking about something that is a monolithic opinion,” Stewart said.

While addressing the warming planet by name is still dicey for elected Republicans who don’t want to alienate core supporters, Stewart says, there’s a growing belief that they ignore it altogether at their electoral peril. That’s because a key voting group, college-educated women, cares intensely about it, and because of its impact on key job-producers in the state like agriculture, the state’s number one industry.

“It’s going to be a reality of business going forward,” said Paul Shumaker, the Republican consultant who partnered with Stewart to conduct the poll. “Just ask the farmer.”

There are still some elected Republicans who continue to deny climate science — perhaps most notably the Lt. Governor-elect Mark Robinson, whose job will include presiding over the Energy Policy Council, an advisory body. But such outright rejection is increasingly rare, and the economic advantages of renewable energy have become harder to resist.

Personalities also play a role. Sen. Harry Brown of Onslow County, an outspoken opponent of wind energy, chose not to run in 2020. Several Republicans vaunted by clean energy interests, including Sens. Bob Steinburg of Chowan County and Vickie Sawyer of Iredell County, along with Reps. Larry Strickland of Johnston County and John Szoka of Fayetteville, are set to return to the General Assembly next year.

Szoka’s re-election by a few hundred votes was a particular relief to clean energy advocates, as was Steinburg’s unexpected 10-point blowout. “The clean energy world is very happy to have him back,” said Betsy McCorkle, lobbyist for the Sustainable Energy Association and other clients, during the group’s webinar. “I know I am.”

Still, there’s the reality of Duke’s political clout. While the 2019 battle over its controversial ratemaking bill showed it can’t win in the legislature over the objections of every other major stakeholder, no one can imagine the reverse; a bill opposed by the company simply can’t clear the General Assembly, no matter which party is in control.

Asked on the earnings call whether a consensus bill could pass with Republicans in charge, Good answered with confidence.

“I believe critical infrastructure focused not only on environment but on job creation has a durability or an appeal to both sides of the aisle,” she said. “And I believe we’ll play a role in working with both sides to bring that intersection together.”

Yet it’s far from guaranteed that utility, consumer, and clean energy interests can all agree on legislation for next year, and if they can, whether it will represent sufficient headway in the battle against dangerous global warming. There’s already talk of making Cooper’s clean energy goals more aggressive, and many complain that they don’t account for leaks associated with methane, the greenhouse gas many times more potent than carbon dioxide.

Some also worry Duke may get overcompensated for investments like offshore wind, with ratepayers holding the bill. They point to a ProPublica investigation of Virginia’s Clean Economy Act, which found the price tag of Dominion Energy’s offshore wind farm inflated by $2.5 billion.

Under the Biden administration, there’s always the chance that partisanship bleeds over into the clean energy arena, much as it did during the Obama years. For two years, Republican Senate President Pro Tem Phil Berger and others in his party have sought to tie Democrats to the Green New Deal, a climate resolution introduced in Congress that has become a cherished boogeyman for the right.

“I’m not particularly optimistic about a ‘Kumbaya’ at the nation’s capital on clean energy,” said Chris Carmody, the director of the North Carolina Clean Energy Business Alliance.

But, choosing his words carefully to focus on areas of bipartisan agreement, he added, “I am optimistic that Republicans and Democrats in Raleigh can find quite a few things in common to like about a competitive and renewable energy path.”