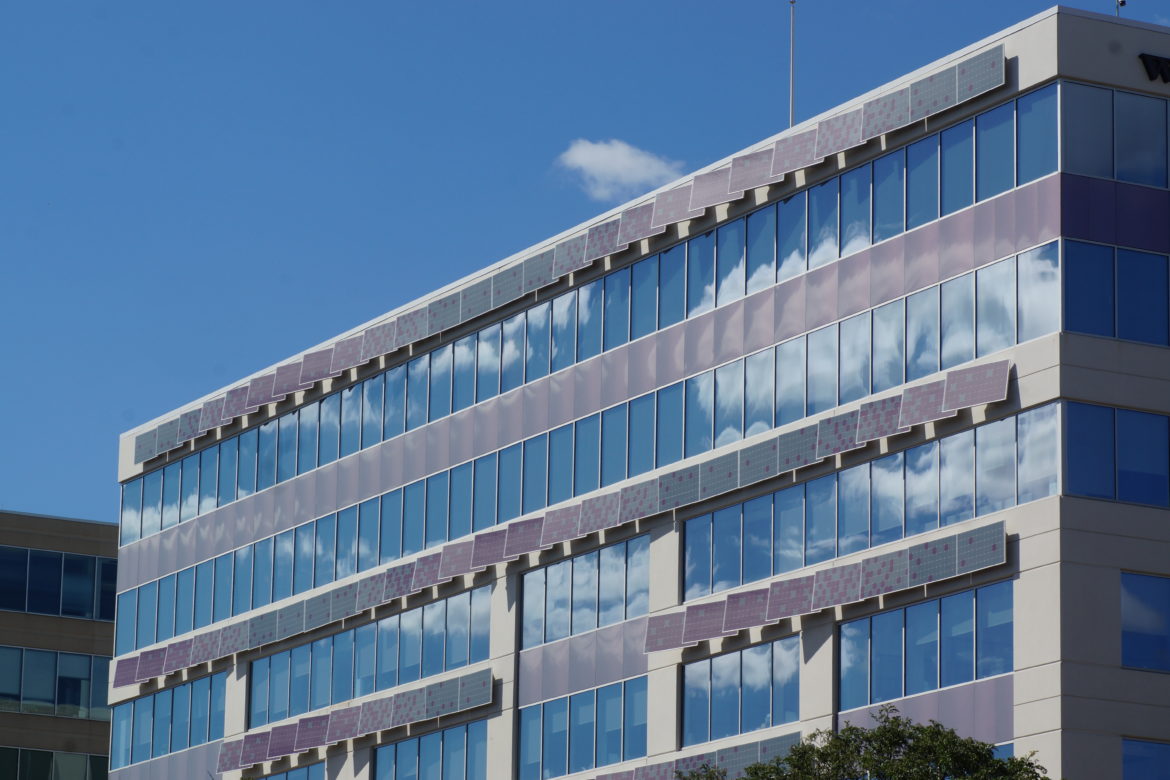 MoZaic East’s developers worked with artists, engineers, designers and architects to create the unique solar installation in the Uptown neighborhood.

Wavy ribbons of tilted panels, each colored in checkerboard patterns of gray and purple, run the length of the MoZaic East building between rows of office windows. The result recalls circuit boards or the bold and boxy work of Dutch artist Piet Mondrain.

“It’s safe to say [MoZaic East] is the world’s first of its kind — there hasn’t been another façade solar that involves using multiple colors and designs and these multiple offset angles,” said Sistine Solar CEO Senthil Balasubramanian, whose company created the “SolarSkin” product that coats the panels in colorful designs.

The 43-kilowatt project came together after the building’s developer, the Ackerberg Group, received a grant from the regional Twin Cities planning organization, the Metropolitan Council. The guidelines called for a “highly visible urban solar demonstration,” said Mike Munson, Ackerberg’s development manager. The company considered placing solar on the side of one of its properties but decided to go a step farther and “make this project artful because this is such a beautiful building,” he said.

The idea that Ackerberg would mix art and clean energy comes as no surprise. The company’s commercial and residential buildings display art throughout the interior and exterior spaces, with the patio MoZaic East shares with MoZaic West offering the equivalent of an outdoor sculptural park. The building provides many sustainability features such as electric charging stations, a green roof, bike storage and a Gold level rating from the U.S. Green Building Council’s Leadership in Energy and Environmental Design (LEED) program.

The building’s more photographed north side sits perched over the Midtown Greenway bicycle path with huge windows and little space for panels. The solar project had to be on the “more boring” southern side of the building, which faces Lagoon Avenue, a busy one-way parallel to the city’s better-known Lake Street.

Ackerberg first considered European solar panels designed for building facades but found the product would need regulatory approval before being used in the United States. All Energy Solar, Ackerberg’s installer, brought in Sistine Solar, which manufactures standard customized panel covers for homes and commercial buildings. The product is often used by homeowners in historic districts or neighborhoods with homeowner association restrictions to match the style of their shingles.

Commercial clients generally add SolarSkin for branding their names on panels to showcase their commitment to sustainability or for artistic projects like the one at MoZaic East, which remain rare. Businesses are just catching on to the potential of using solar panels as displays. “Most people don’t even know there’s an aesthetic possibility with solar,” Balasubramanian said.

Sistine Solar’s design staff worked with MoZaic East’s architecture firm, the Alliiance, to prototype and test designs before choosing the checkerboard pattern. “It involved artists, engineers, designers and architects. It was a great collaboration,” Balasubramanian said.

The camouflage on panels diminishes power production between 1% to more than 20%. A basic logo or shingle-like cover for a home system will not lose much solar production, he said. Busy, vibrant design leads to higher losses, with the Ackerberg project likely to cost as much as 15% to 25% in energy production. 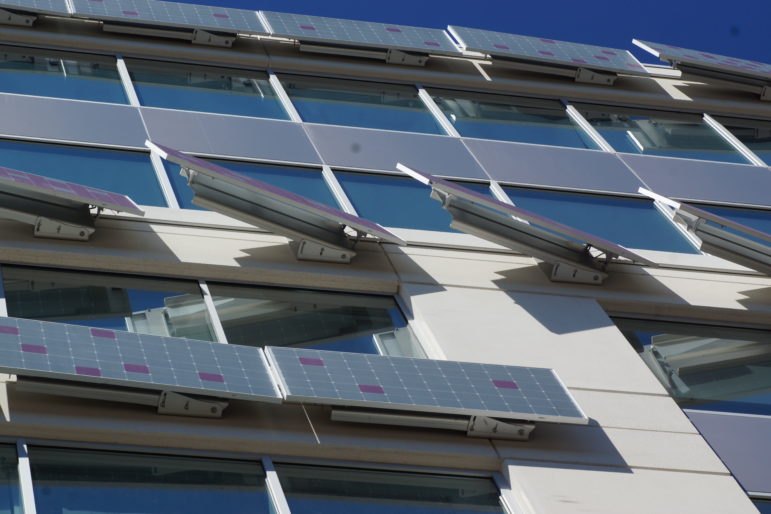 (photo by Katherine Jossi / for the Energy News Network)

Part of the challenge was designing with the building’s color-changing facade in mind. The side morphs from purple to light gray, and gradients in-between, depending on how light hits the surface. “This project was novel, and it stretched our design muscles more than other projects did,” Balasubramanian said.

After having selected the patterns, MoZaic East’s architect, Ernesto Ruiz-Garcia, proposed tilting the panels to create wave-like strips instead of static rows flush with the facade. To meet that demand, All Energy Solar designed a custom bracket with seven positions that a St. Paul firm fabricated for the project.

The panels can be tilted away from the building or skyward, where they achieve more solar gain, according to Michael Thalhimer, director of business development at All Energy Solar. The brackets hide electrical controls behind panels from passersby looking upward. “The layout gives you a wave aesthetic curving on and off the building,” he said.

Sistine Solar’s innovative “skins” may make solar more palatable to critics who would rather not see solar on rooftops or greenfield, he suggested. Art can have a way of taming public controversy over intrusive projects, and as it finds its way into the clean energy industry, it could serve to ameliorate the concerns of neighbors.

“No doubt this is a special project — this is not your common everyday solar installation — but I do think it legitimately speaks to the versatility that people can have in the way they do solar now,” Thalhimer said. “There was once one way to put up solar, but there are two or three ways new ways to do it that are more aesthetically pleasing.”