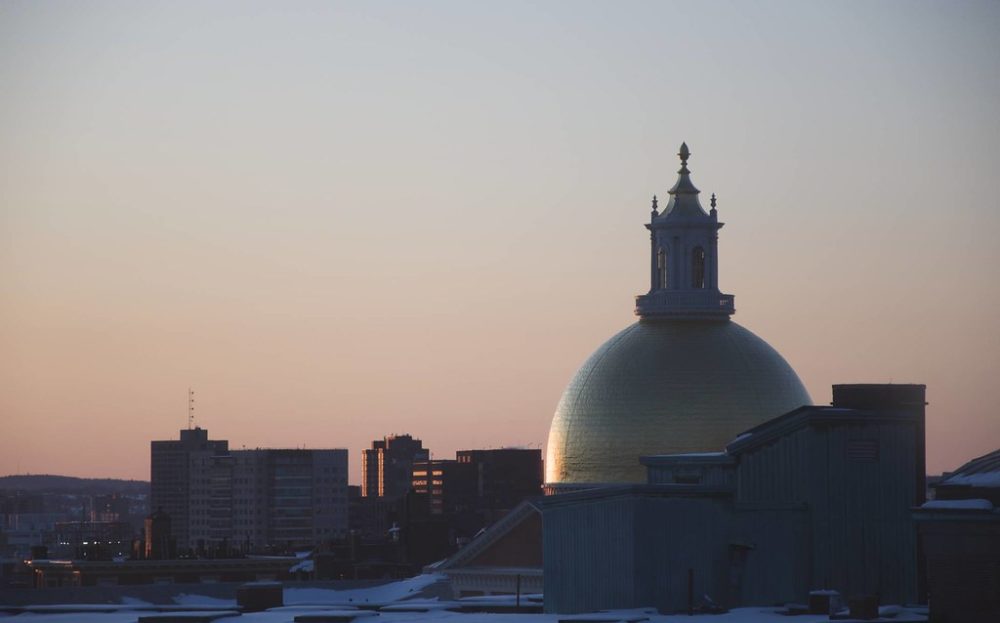 The dome of the Massachusetts State Capitol Building in Boston.

Gov. Charlie Baker supports a goal of net-zero by 2050, but a growing list of stakeholders say that’s not good enough.

As the end of Massachusetts’ state legislative session draws near, activists, municipal officials, businesses, and civic organizations are urging lawmakers to take action on a bill that would require a 100% renewable electricity transition by 2045 — and making plans for next steps if the measure is not passed this year.

“We want to make sure that this year does not go by without strong and decisive action on clean energy at the Statehouse,” said Ben Hellerstein, state director for Environment Massachusetts.

Massachusetts Gov. Charlie Baker in January committed to a goal of net-zero greenhouse gas emissions by 2050. Many, however, argue that this target will be impossible to hit without stronger measures to accelerate the switch to renewable energy. If current standards are not changed, the transition to clean energy would not be complete until the turn of the next century.

To address this disparity, state Rep. Marjorie Decker and state Rep. Sean Garballey sponsored a bill (H.2836) that calls for all the state’s electricity to be renewably sourced by 2035, and all energy used for transportation and heating to be renewable by 2045. The legislation was sent to committee for consideration in January 2019 and a hearing was held last summer. The committee originally set a deadline of early June to make a decision on the bill, but that date was moved to July 22.

With this deadline looming, the legislative session slated to close at the end of the month, and much of lawmakers’ attention devoted to the state’s coronavirus response, the push is on to get the bill reported favorably out of committee and ultimately passed.

Environment Massachusetts along with the state chapter of the Sierra Club worked together to submit a letter, signed by 150 municipal officials from across the state, asking lawmakers to move the bill forward.

“It is way past time to push this over the finish line,” said Quinton Zondervan, a city councilor in Cambridge and one of the municipal leaders to sign the letter.

Environment Massachusetts has also been rallying support from other groups across the state. Another letter supporting renewable energy was signed by more than 80 medical professional and medical students, including physicians at some of the state’s most prestigious hospitals. Burning fossil fuels, the letter contends, damages public health, especially in the most vulnerable populations.

At the same time, environmental group 350 Mass and Act on Mass, an organization that lobbies for greater legislative transparency, have partnered on an initiative to collect signatures to have two nonbinding questions placed on the ballot in some legislative districts this fall. One question asks voters to direct their representatives to vote for 100% renewable energy legislation. The other would tell representatives to support a measure requiring committees to make their internal votes public.

As early as 2009, state legislators were pushing measures to look into what it would take to go 100% renewable. In 2017, a renewable energy bill was filed, referred to committee, and then “sent to study,” a procedural move that generally means the proposal has been killed.

The ballot question effort is an attempt to emphasize to legislators that voters are behind renewable energy and they want the information needed to hold their representatives accountable for their committee votes.

“We’re trying to demonstrate there’s deep public support and legislators should listen to their constituents,” said Craig Altemose, executive director of the Better Future Project, a Cambridge-based nonprofit that advocates for a transition to clean energy.

Supporters said that Massachusetts needs to catch up with other states, municipalities, and even businesses that have already committed to clean energy. Five states and Washington, D.C., have 100% renewable targets, according to EnergySage.com; another 10 states are aiming for a complete transition to clean energy, a term that can include nuclear power as well as renewable sources like solar and wind.

Within Massachusetts, several major businesses — including biotechnology firm Biogen, data storage company Iron Mountain, and athletic apparel maker New Balance — have signed onto RE100, a global corporate sustainability initiative in which participants pledge to be 100% renewable powered by 2050 at the latest. Cities and towns including Cambridge, Lowell, and Northampton have also committed to 100% renewable power.

“The science is pretty clear that 2050 is too late,” Zondervan said. “It’s just not going fast enough.”

Whether the statewide legislation will pass is still an open question, supporters said. The Senate has been broadly supportive of climate change measures this session, and there seems to be an appetite in both chambers to take some action, they said. However, the urgency of the coronavirus pandemic has deprioritized bills focusing on other issues, all agreed.

The goal of these recent efforts is to keep renewable energy at the forefront of the discussion, even as the coronavirus receives much-deserved attention, supporters said.

“We don’t want to see the COVID crisis being an excuse not to act on these really important issues,” Hellerstein said. “Despite all the challenges we’re facing in the world today, protecting our environment is just as important as it’s always been.”