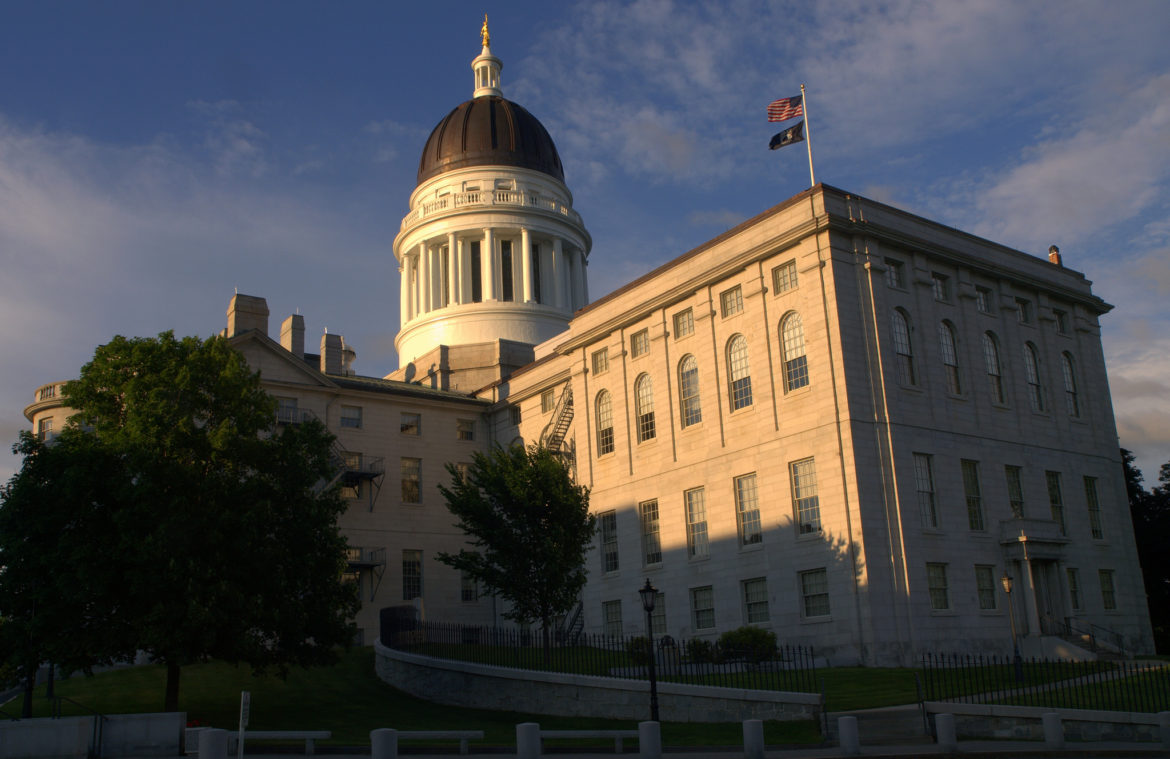 The Maine Statehouse in Augusta.

Creating a publicly owned distribution utility could boost reliability and renewables, supporters of the proposal argue.

Years of simmering frustration over power outages and transmission issues in Maine is fueling a pitch for a public takeover of the state’s electric grid.

Maine records longer and more frequent power outages than any other state, according to federal data. The state’s investor-owned utilities blame the state’s rugged topography, but critics say the companies have underinvested in the grid infrastructure that could improve reliability and better accommodate renewables.

Now, a bipartisan bill is proposing to buy the transmission and distribution infrastructure of Central Maine Power and Emera and create a new publicly owned utility to operate it.

The legislation would require major upfront costs and was a longshot even before the coronavirus pandemic, but backers see a political path that unites clean energy advocates and various critics of the utilities. Central Maine Power, in particular, has been the subject of controversy over an unpopular transmission line project.

The proposal’s architects and supporters say the benefits of what they call a “consumer-owned utility” are clear —  Mainers would save money and it would create thousands of green jobs while vastly improving one of the nation’s most unreliable grids.

It would also give Maine control over utility infrastructure, which is essential to quickly decarbonizing the state and meeting climate goals, said Rep. Seth Berry, the bill’s author. While Maine is now aiming to reduce its 1990 carbon emission levels by 80% by 2050, a consumer-owned utility could potentially halve that timeline, according to Berry’s calculations.

“The key here is to understand that the grid is the foundation of our clean energy future,” he said. “So control of the grid and the decision making process around it is critical.”

Bill HP 1181 would create an agency called the Maine Power Delivery Authority that would purchase Emera’s and Central Maine Power’s infrastructure. Power plants and other generation sources would not change hands.

Maine’s transition to renewables and the electrification of the economy are being slowed by infrastructure and corporate resistance, Berry said. He described the grid’s low-voltage distribution system as “antiquated and brittle,” and much of it is incompatible with distributed renewables, which require two-way flow of information and electricity.

Berry said Central Maine Power and Emera have also made it difficult for those producing renewable energy to connect to the grid, by “slow-walking” interconnects with renewable developments and withholding critical information needed to make decisions.

Berry said a switch to a consumer-owned utility would also give Maine more control over specific projects. Over loud opposition, Central Maine Power this year successfully pushed through a controversial transmission line that cuts across the state’s western mountains to connect a superdam in Quebec with New England customers. It doesn’t supply power to Maine, and critics label it an “extension cord.”

Central Maine Power will make about $60 million annually operating what’s referred to as the “CMP corridor.” If a consumer-owned utility was in place, the corridor’s profits would go to Maine instead of Spain-owned CMP and its shareholders, Berry said. It’s also likely that a state agency would be more responsive to residents’ wishes and wouldn’t have pursued the project in the first place, he said.

“We could have either captured the benefits directly for the state of Maine in return for the sacrifice of our beautiful mountains being sliced and diced, or instead we could’ve generated clean energy for the Eastern Seaboard grid by investing in wind and solar,” Berry said.

He also noted that investor-owned utilities’ business model prioritizes large, expensive transmission projects that deliver energy over long distances, like the CMP corridor. At the same time, the business model disincentivizes distributive energy projects off which the companies won’t make as much money. In short, Ely said, Central Maine Power and Emera are making decisions based on what’s best for their shareholders, not what’s best for Maine consumers. A consumer-owned utility would put Mainers over profits, she said.

“Shareholders are there to make a profit from the companies’ investments,” Ely said. “In the model that Rep. Berry is putting forward, Mainers are the shareholders and our goals are not just lower cost energy,  but really forwarding Maine’s clean energy goals, and that would be a breath of fresh air.”

Central Maine Power didn’t respond to requests for comment, though company officials have publicly said that there would be a high cost to start the new entity and expressed doubts about a new agency’s ability to deliver a stable power supply. In a statement, an Emera spokesperson echoed that.

“A recent study done by London Economics International shows that a proposed transition to government-operated power across the State of Maine would be costly, bearing significant risks and uncertainties, and could lead to higher rates for customers for an extended period of time, offering no guarantees of increased reliability or service improvements,” she said.

Berry said he hopes to shield a consumer-owned utility from the political winds by having it be governed by a board of 13 to 15 members that includes a mix of elected officials and political appointees.

Berry said there’s never been a better time for such a proposal. Central Maine Power, which serves most of the state, is a deeply unpopular company that in recent years has faced criticism over a litany of scandals and blunders. Critics also highlight that Emera and CMP are both foreign-owned.

Berry’s proposal has at least some support on both sides of the aisle, including those who are concerned about climate change, as well as globalism and large corporations that “control vital aspects of our lives,” Berry said. Meanwhile, the proposal would be a job creator at a time when the nation is teetering on the edge of recession.

“All across the political spectrum, the stars are aligned,” Berry said.

The proposal was in committee and had yet to be voted on in March when Maine’s Legislature adjourned indefinitely.