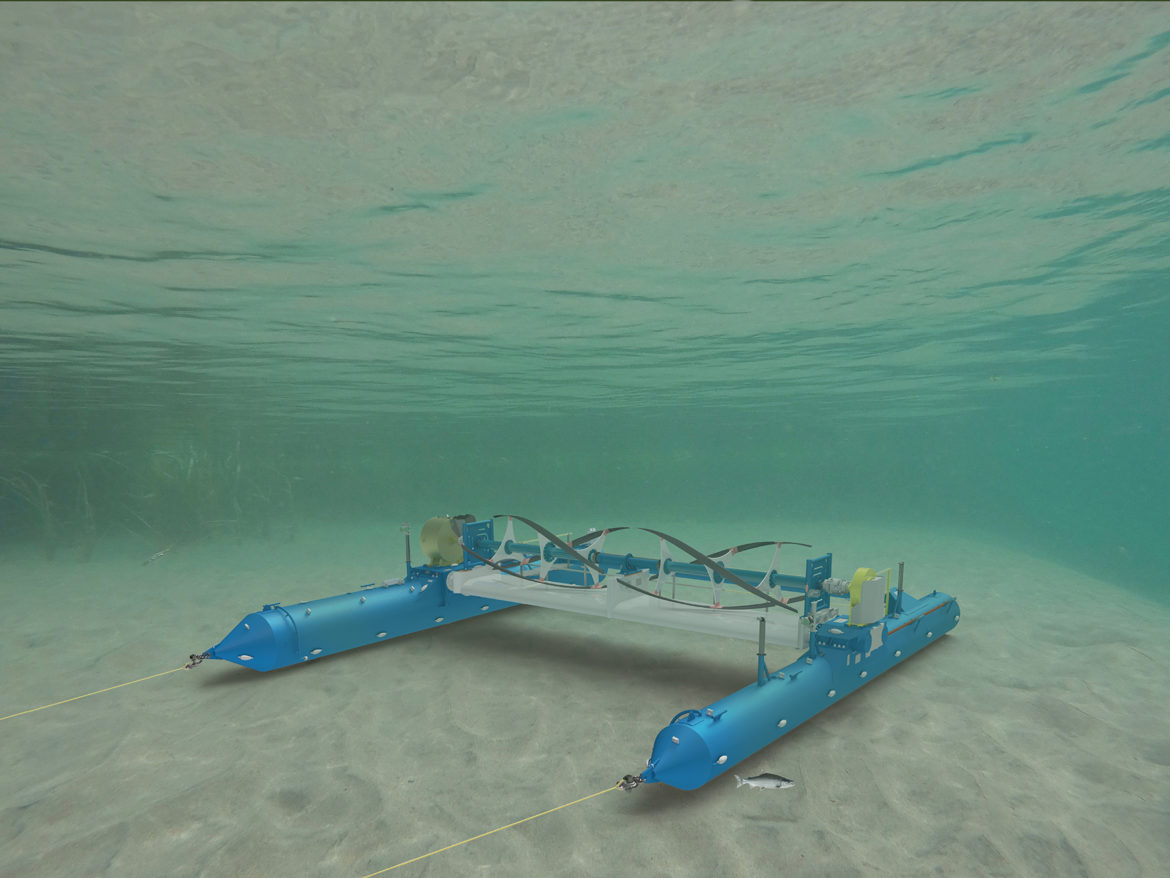 After years of development, tidal and river energy supporters say the technology is on the cusp of wider commercial deployment, especially if it can win federal support.

With much of New England’s attention on offshore wind, a Maine company hopes to put itself on the map with tidal energy.

Portland, Maine-based Ocean Renewable Power Company recently signed a memorandum of understanding with the city of Eastport on a five-year plan to develop a $10 million microgrid primarily powered by tidal generation.

ORPC has been working to develop marine electricity generation technology since 2004 and has since expanded its offices internationally, including to Montreal and Dublin and soon in Chile. The company’s river-based generation technology is currently providing power to a remote Alaska community.

While tidal and river energy haven’t reached the same level of visibility as other renewable sources, supporters say these and related resources like wave and ocean current energy — collectively called marine and hydrokinetic resources — are at a similar point now to where solar and wind were a decade ago. They say the predictability of tides and currents in places like the Western Passage, the inlet on which Eastport is located, makes these resources promising as governments aim to create a resilient grid.

“We’re entering a new phase,” said John Ferland, ORPC’s president, “a decade where there’s more renewables coming online, there’s greater policy support for all kinds of renewables.” ORPC has developed underwater systems that use turbines positioned parallel to the ocean floor and perpendicular to the current to generate electricity. They’re submerged at depths that allow boats to pass above.

Since last year, the company’s river-based generator, the RivGen, has been providing power for Igiugig, a remote village on the Kvichak River in southwestern Alaska. The village, which isn’t connected to the electric grid, has traditionally relied on imported diesel for its power. But according to ORPC, that diesel use will decrease 90% once a second RivGen, as well as storage and smart grid controls, are added this year and next year. The diesel generators will be a backup to the two river generators.

Eastport, on the other hand, is connected to the grid, but its location at the end of an aging distribution network and near a valuable tidal resource makes it well-suited for the new project, Ferland said. (Tidal and river energy have several differences, but both involve drawing energy from moving currents.)

For Eastport’s new city manager, Thomas Hoskins, the draw is economic and environmental. The city of about 1,300 year-round residents (three times that many in the summer), about 180 miles northwest of Portland, hasn’t had a strong manufacturing base for more than 20 years, he said.

Hoskins wants to make the city more appealing for younger residents by offering work — this project should include about 100 jobs, and Hoskins has other major projects planned for the city — and the promise of sustainability. “You are now talking to a whole new generation of folks,” he said of the millennials he’d like to see come to Eastport. They tend to be particularly focused on environmental issues.

With the pandemic now making rural life more appealing for some big-city residents, Hoskins sees a chance to show Eastport’s potential as a permanent destination. The local airport is also planned for an upgrade, including offering commercial flights, which will make the city more accessible.

Tidal has been part of discussions in Maine for about a decade. In 2010, then-Gov. John Baldacci signed a law to propel the state’s ocean energy research forward. The act allowed ORPC to secure a power purchase agreement with the regional electric utility. At the time it was Bangor Hydro Electric Company, which is now Versant Power.

The federal Department of Energy’s National Renewable Energy Laboratory is also looking at hydrokinetic energy. “Each one of those [resources] has massive amounts of energy distributed at different locations around the country,” said Levi Kilcher, a researcher who focuses on ocean energy at the lab.

Ferland noted that past research has shown the Western Passage, as well as other New England locations like Massachusetts’ Cape Cod Canal and waters off Martha’s Vineyard, show strong development promise.

“If we’re totally honest, the amount of energy that’s in the tides and in the waves is not as large” as wind or solar, Kilcher said. “We really see the value in sort of diversifying our energy sources.”

Tides are very predictable, he said, and so are other water resources like rivers, waves and the Gulf Stream. “Then couple that with a diversified energy portfolio,” he said. “In my opinion, a more diverse set of energy resources gives you a more resilient energy system.”

“Tidal energy generally has been a bit of a background player in Maine’s energy world,” said Jeff Marks, Acadia Center’s senior policy advocate and Maine director. “But as far as Maine’s entrepreneurial energy world, it’s been pretty prominent over the last decade, and ORPC has been leading that.”

“Solar and wind are getting the attention now because they’re commercially viable and available today,” Marks said, but those resources spent a long time in development. “This is kind of how decarbonization and clean energy progress works in New England and throughout the country and throughout the world.”

Similar to work that’s been done recently to create floating platforms for offshore wind turbines, he added, “if it’s further developed, it can create the skilled labor and the new technologies and product lines that will become competitive, or may become competitive, with other renewable energy resources and technology.”

ORPC first tried out its tidal generation in Eastport from 2012 to 2013, at which point the device was removed from the water due to a manufacturing defect. The company has spent the years since improving its devices, including the system now deployed in Alaska.

As of last month, ORPC has a memorandum of understanding with Eastport for the five-year development of a microgrid. The proposal includes tidal, solar and storage, with tidal serving as the primary baseload generation source, Ferland said.

The next year will bring a series of events to launch development, raise funds and share the project plans with the community. This includes a feasibility study and a series of community workshops to gather residents’ input and offer opportunities to learn about tidal energy and the technology that will be used in the microgrid.

Hoskins is also planning for the project to include a museum-like educational component where community members can learn about the microgrid. He’d like it to “hopefully get some kids interested in all things water and marine life … to give them a diving board to go to college and understand marine life and aquaculture.”

This comes as ORPC seeks to expand its value, providing not just generation but coordinating with other industry members to deliver more useful energy solutions to places like Eastport and Igiugig.

“The overriding challenge, in my opinion, is something we face as a company and others in this business face,” Ferland said. “We have a commercial product. We’re looking to expand into the marketplace.”

Kilcher said tidal installations might end up similar to wind farms: arrays of turbines either on the seafloor or floating above. In some cases, like in Alaska, he added, only one or two turbines will be necessary. But generally, “I think for the industry to be successful we do need to be able to scale up,” he said.

ORPC needs to produce its products at market scale to truly be successful, Ferland said — not just as one-off projects, but 10 or even 50 at a time to keep costs down. Ideally, federal funds would be available to finance large-scale deployments, he said, “to show the marketplace that increasingly, this is an excellent option for renewable energy in tidal and river locations and that it’s ready to be commercialized.”

Given that funding is typically available for renewable projects, he added, “all we’re asking is for DOE and Congress, when they write the bills, to consider scale … in the various funding programs that are available competitively on an annual basis.”

Now that other resources are more established, “we’re sort of next in line,” Ferland said. “And the industry needs the same public sector policy and funding support that enabled those sectors to begin to grow and thrive.”