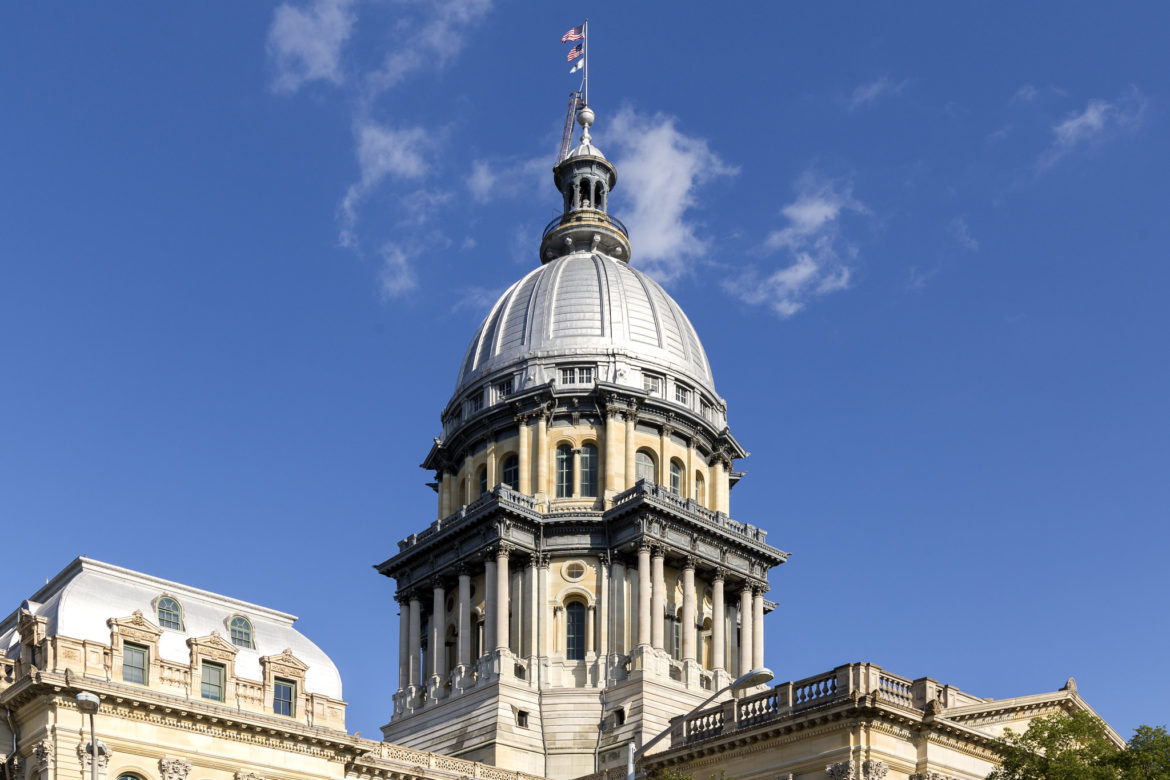 The Illinois Statehouse in Springfield.

Unions representing coal, nuclear and renewable workers, as well as engineers, ironworkers and janitors, put their weight behind a new energy bill.

A coalition of labor unions has joined the negotiations over a new energy bill in Illinois, where stakeholders are hashing out proposed legislation that many hope will pass during a veto session in November.

The coalition, known as Climate Jobs Illinois, is emphasizing the creation of well-paying union jobs and a just transition for workers affected by the closure of coal plants. They also consider the state’s nuclear plants to be crucial and support legislative measures to keep the plants operating, though they emphasize they are not allied with nuclear plant owner Exelon.

“We’re putting working families at the center of the table in the transition to a clean energy economy,” said Nikki Budzinski, executive director of the coalition and a former senior advisor to Gov. J.B. Pritzker. “How do we make that transition, looking at how it impacts working people and the communities they live in, both addressing the climate crisis and income inequality? We believe as a coalition that you don’t have to choose between the two — we believe in legislative and policy solutions that address both.”

For months legislators have considered two bills — known as Path to 100 and the Clean Energy Jobs Act — backed by the renewable industry and a coalition of clean energy and community groups, respectively. Both called for moving to 100% clean energy, with Path to 100 promising a quicker uptick in renewables funding and the Clean Energy Jobs Act calling for broader equity and jobs components, along with supports for nuclear plants.

SEIU Local 1 was a prominent member of the Clean Jobs Coalition that backs the Clean Energy Jobs Act, and labor leaders have been involved in energy bill negotiations for years. But Budzinski and Pat Devaney, Illinois AFL-CIO secretary treasurer, said the new coalition is important in making jobs and a just transition central to the discussions. While specifics of their platform are still being determined, making sure that jobs are well-paying and an emphasis on union jobs are likely to be key components.

“We need to make sure these jobs we’re creating in this new green energy space are good union jobs that benefit Illinois workers,” Devaney said. “And we’re being mindful of the equity and social justice issues that exist, finding a way to include under-represented communities and communities of color into the training programs to make sure we’re creating the good-paying jobs for everyone.”

The labor coalition is focusing on four components: just transition, power generation, energy efficiency in buildings, and the transportation sector.

“A strong public transit system is critical to reducing carbon emissions including in communities of color that are reliant on good public transportation,” said Budzinski. “It’s important to be supporting the transit system coming out of COVID, in this crisis with revenue down, ridership down.”

Illinois’s Future Energy Jobs Act of 2017 sparked a boom in distributed solar installation through a program offering the right to sell renewable energy credits. But the popularity of the program and structural problems mean that the funding for those credits is nearly depleted, so stakeholders across the spectrum agree that new legislation is desperately needed to avoid the withering of the state’s nascent solar industry.

In a platform released Aug. 20, Pritzker said he did not support proposed capacity market reforms, and called instead for a price on carbon, emissions trading or other measures to help fund renewables and reduce emissions.

“We very much do believe the current nuclear fleet is important, not just for baseload but for the transition to 100% clean energy,” Budzinski said. She added that legislation would need to have transparency provisions regarding any supports. “We’re not funded by the utilities or any of the energy developers, it’s very important as we stay focused on working people that we maintain that independence.”

Brian Roberts has been a union laborer for 36 years, and in 2006 he became focused on the wind industry, helping lay the foundation for wind farms in 11 states and Canada.

“It’s a win-win situation in my eyes,” he said of wind power. “Look at the tax dollars it generates for local school districts, the payments to landowners for their farmland, not to mention the employees.”

He started out dumping gravel from trucks and is now a civil superintendent overseeing the early stages of wind farm construction for a company called White Construction.

“Wind is really fast-paced — a lot goes into getting one of these projects off the ground from permitting all the way to the landowner agreements,” Roberts said. “Once you start one, there’s a certain date you have to be done by. You need a team of workers that really focuses over a lot of hours and days. We always say ‘safety, quality, quantity’ — that’s our motto.”

He said his union work has allowed him to raise a family with four children, “put the kids through college, put braces on them, take care of them, and as I’m nearing retirement, I will still be in good shape.”

He adds that unionization throughout the clean energy supply chain is important so that when a company like his travels from state to state installing wind farms, they can count on local unions to have trained and vetted local workers for contract jobs.

Budzinski noted that labor standards related to unionization, safety, pay or other factors could be requirements or incentives for receiving the right to sell renewable energy credits or for contracts to sell power to utilities. Meanwhile, Bob Hattier, a business representative and master trainer for IBEW Local 134, said he hopes legislation could improve safety and customer service while also promoting quality jobs by “closing loopholes” in and bolstering enforcement of existing laws and policies.

For example, he is concerned about solar companies leasing installations to customers without passing on the savings that such third-party owners reap from tax incentives. And he said the Illinois Commerce Commission and other entities could do more to make sure renewable energy contractors are fully qualified and certified.

“People do need to understand this is energy production, there are hazards associated with it,” said Hattier, who trains local firefighters to understand solar systems.

As part of a union that represents both coal and renewable industry members, Hattier said a just transition away from coal won’t be easy.

“The skills are definitely transferrable, but the nature of the work is very different,” Hattier said. “Employees of a power plant go to the same place every day, whereas renewable jobs are very transient. And there aren’t as many permanent jobs with renewables. There are some permanent jobs in operations and maintenance, but it still doesn’t compare with the communities built around these power plants, whether the neighborhood diner or the auto repair shop. It’s a complex conversation, but the infrastructure can be built keeping that in mind.”

Hattier said that when he got into the solar industry 20 years ago, customers getting solar were doing it for purely environmental reasons given the lengthy payback time. Today he thinks most customers are motivated by the financial benefits. But he thinks “we’re at the point where we need to bring the environmental aspect back into the conversation.”

Hattier and Budzinski both said they think union members see environmental justice and fighting climate change as related to their advocacy of workers’ rights and dignity.

“We represent working people who live in communities disproportionately affected by the climate crisis and COVID,” Budzinski said. “We are much more than the trades directly building the new energy economy. Unions that are not directly impacted are hearing from their members that they’d like to see their unions get involved in the climate crisis, and build a strategic pathway as part of that transition.”