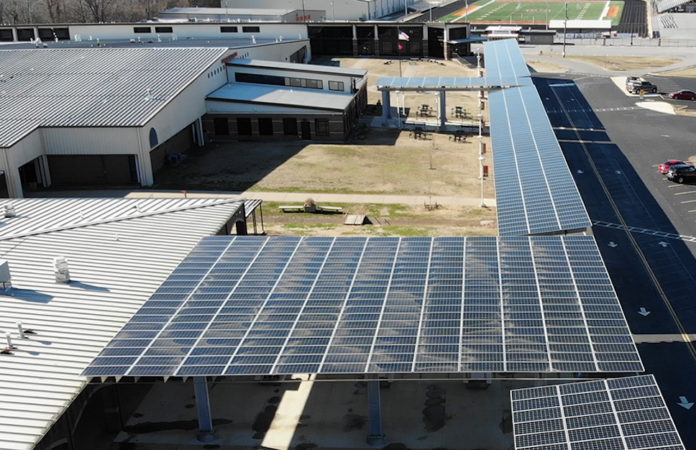 Since 2014, K-12 schools have seen a 139% increase in the amount of solar installed, according to a new report from clean energy nonprofit Generation180, in partnership with The Solar Foundation and the Solar Energy Industries Association (SEIA).

The report finds that 7,332 schools nationwide utilize solar power, making up 5.5% of all K-12 public and private schools in the U.S. Over the last five years, the number of schools with solar increased by 81%, and now 5.3 million students attend a school with solar.  The top five states for solar on schools – California, New Jersey, Arizona, Massachusetts and Indiana – helped drive this growth.

“Solar is absolutely attainable for all schools – regardless of how sunny or wealthy it is where you live,” says Wendy Philleo, executive director of Generation180. “Too few schools realize that solar is something they can take advantage of to save money and benefit students today.”

Report authors note that school districts can save significantly on energy costs over time. For example, Tucson Unified School District in Arizona expects to save $43 million over 20 years, and in Arkansas, the Batesville School District used energy savings to give teachers up to $9,000 per year in raises.

According to the report, 79% of the solar installed on schools was financed by a third party – such as a solar developer – who funds, builds, owns and maintains the system. This allows schools and districts, regardless of the size of their budget, to purchase solar energy and receive immediate energy cost savings. Power purchase agreements are a popular third-party arrangement currently available in 28 states and Washington, D.C.

To read the full third edition of Brighter Future: A Study on Solar in U.S. Schools report, click here.