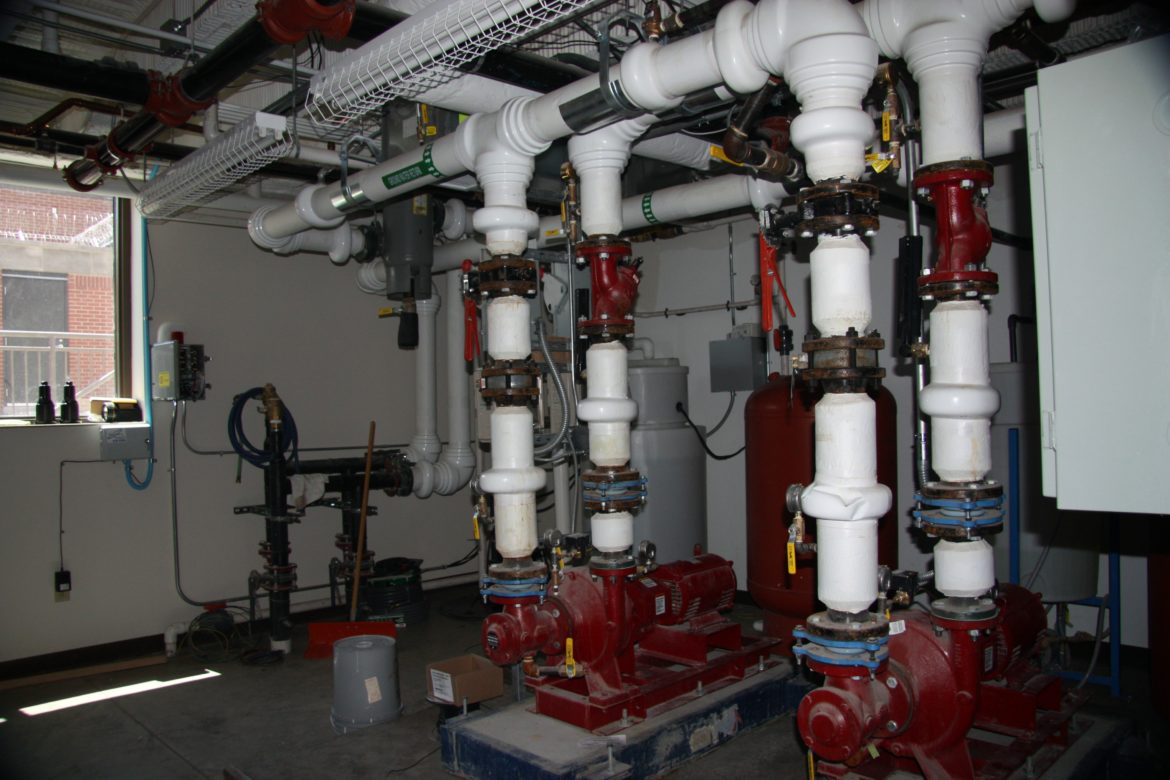 An example of a ground source heat pump system, extracting both heat and cooling from the ground underneath a Kansas courthouse.

Utilities could prove useful partners in the projects, which involve drilling, trenching and laying pipe to bring underground heat into buildings.

Two pilot projects in Massachusetts will attempt to deploy geothermal heating across entire neighborhoods — an innovative model that aims to slash fossil fuel use while providing an economic transition for gas utilities and their workers.

“The more we’ve learned, the more incredible it has seemed,” said Audrey Schulman, co-founder and co-executive director of the Home Energy Efficiency Team, a Cambridge-based nonprofit that developed and promoted the geothermal micro-district concept.

The first pilot is slated for the Merrimack Valley, an area in northeastern Massachusetts hit by a series of gas explosions and fires in September 2018 that federal investigators blamed on inadequate management by Columbia Gas. The $56 million settlement the company agreed to this fall included $4 million to implement a geothermal test project.

A second project is being developed by utility Eversource, which plans to spend $10.3 million constructing a district geothermal system in a densely populated, mixed-use area that has not yet been selected.

“We’re really thinking about how we can be a catalyst for clean energy in the region,” said Michael Goldman, director of energy efficiency for Eversource.

Geothermal systems — also referred to as ground-source heat pumps — are not a new concept. They work by running pipes filled with antifreeze liquid as far as 500 feet into the ground, to a depth at which the temperature is relatively stable, usually lingering in the low 50s Fahrenheit in Massachusetts. Heat is extracted from the earth and carried through the liquid-filled pipes to warm buildings.

The same principle allows for geothermal cooling as well: On hot days, a heat pump extracts heat from the air in the building and transfers it into the liquid in the pipes. The warmed liquid travels downward and its heat is released into the ground.

Geothermal systems are among the cleanest and most efficient heating options. Because the heat comes from the ground itself, the only fossil fuels burned are those used to generate the electricity that runs the heat pump. This efficiency also makes them very cost-effective to operate.

“The individual technology is pretty mature and proven,” Goldman said. “What’s new is the district idea of connecting multiple customers in a shared loop system.”

Massachusetts is attempting to reach net-zero carbon emissions by 2050, a goal that will require extreme reductions in the use of natural gas. For its part, the Home Energy Efficiency Team has long been trying to reduce natural gas use, citing the emissions from burning it as a fuel, the safety hazards of piping explosive gas into homes, and the quantity of methane leaked from pipes — some of which were installed during the presidency of Abraham Lincoln.

Schulman and co-executive director Zeyneb Magavi considered whether using ground-source heat pumps on individual properties could play a role, but they determined there were limits to this potential solution. Installing individual geothermal systems is pricey, a significant barrier to widespread adoption. And even if natural gas could be widely replaced with geothermal, this change would hurt the utility companies and their workers.

The micro-district concept promises to overcome both those barriers, by spreading out the cost and allowing utility companies to transition to new services rather than taking a financial hit from a shift to cleaner heat.

The Home Energy Efficiency Team commissioned engineering consultant Buro Happold to study the potential impact of geothermal micro-districts. The resultant report found it should be possible for such a system to meet 100% of its participants’ heating and cooling needs.

To work most efficiently, the report noted, a geothermal network should include both buildings that need heat and those that need cooling. An apartment building could be connected to the same loop as an ice rink, for example.

Gas utilities — which already have extensive experience with drilling, trenching, and laying pipe as well as managing capital-intensive projects and long-lived assets — are well suited to do the work of developing multi-property geothermal systems. If geothermal districts prove feasible, they could allow the utilities to evolve into new services and technologies, rather than taking a potentially disastrous financial hit as the market turns away from fossil fuels.

“It’s actually a lot of overlap with what the natural gas utility already does,” Goldman said. “It really seemed like a natural next step.”

The next step for both pilot projects is to find appropriate sites. Eversource is currently seeking options within its service area, which includes much of southeastern and central Massachusetts, parts of Boston, and a few towns north of Boston. The ideal site, Schulman and Magavi said, contains a mix of low-income housing, market-rate housing, and varied businesses. The buildings within the district should also have a range of heating and cooling needs to help balance the thermal needs of the system.

Eversource will pay for the infrastructure development and the equipment necessary for participating buildings to connect to and use the system.

The initial proposal called for the new system to be operational in early 2022, but the pandemic might affect that intended timeline, Goldman said.

The Merrimack Valley project will be installed by a developer chosen through a competitive grant process overseen by the state attorney general’s office, Schulman said, though the request for proposals has not yet been released. The site will be chosen as part of that process and will be within the city of Lawrence, or the towns of Andover or North Andover — the municipalities affected by the 2018 explosions.

Though it is still early in the pilot project process, there is reason to be optimistic, said John Cleveland, executive director of Boston’s Green Ribbon Commission, an organization formed to support the city’s efforts to go carbon neutral by 2050.

“If you look across the range of things we need to do to hit our carbon neutrality target, thermal decarbonization is the toughest nut to crack,” Cleveland said. “That’s why I think this is a cool thing to be experimenting with.”

In association with these pilots, the Home Energy Efficiency Team has also applied for a $3 million federal grant to create a research team that could monitor the systems’ effects on ground temperature, the impact on the electric grid, and the implications for public health. The team, which would include members from national research laboratories and major universities, would also develop standards for reporting data so future projects could more easily be compared to each other.

If the initial projects prove successful, Schulman sees the possibility of expanding each geothermal district to include more and more participants.

“Our hope is that each pilot is a seed that grows,” she said.