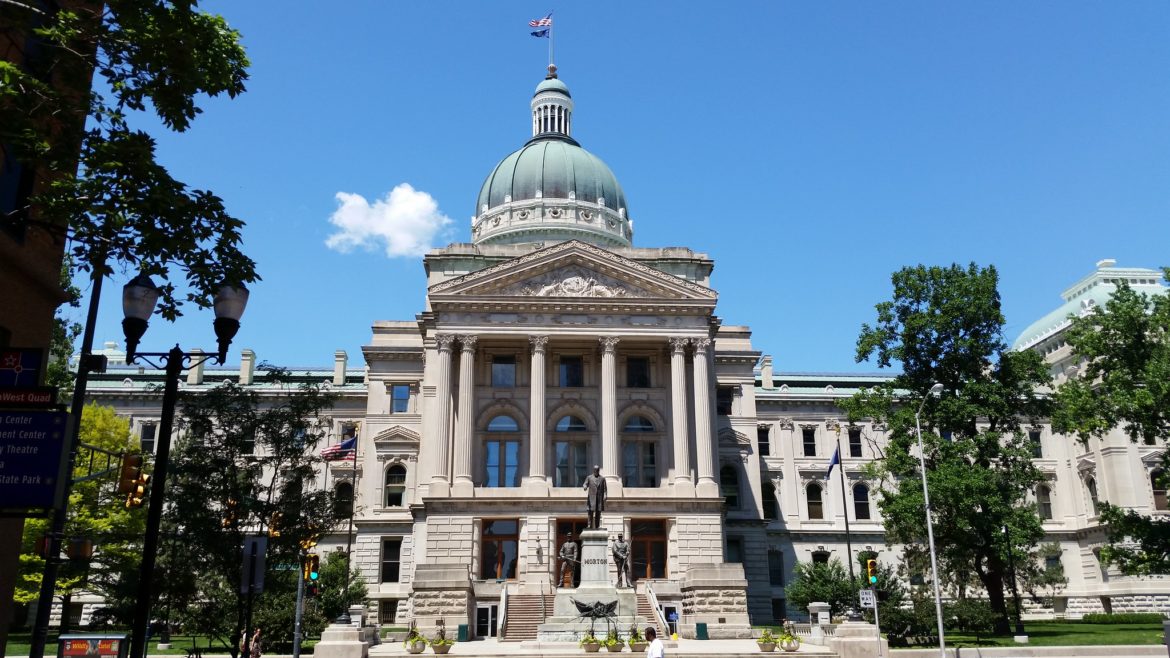 The Indiana Statehouse in Indianapolis.

The proposal to prevent cities from prohibiting new natural gas hookups mirrors pending legislation in other states, including Kansas and Missouri.

Indiana legislators are expected to vote this week on a bill that could prohibit municipalities from following in the footsteps of Berkeley and San Francisco in prohibiting natural gas hookups for home heating in new construction.

Proponents of the bill (HB 1191) in Indiana — and similar legislation proposed in other states, including Kansas and Missouri — have framed it as a way to preserve consumers’ choice to use natural gas for heating, cooking and hot water, which is typically cheaper than electricity.

Critics of the bill say it is an infringement on local rights and an attempt to preemptively protect natural gas utilities, even though there have been no moves to limit natural gas in Indiana.

Indiana currently gets the majority of its electricity from coal, so electrification in the near-term would not necessarily be a cleaner choice. But clean energy advocates in Indiana and elsewhere say that electrification of heating can be part of a shift to cleaner, carbon-free energy, as solar and wind are increasingly used to generate electricity.

“We absolutely support electrification and absolutely believe we need to transition to a 100% clean energy future and eliminate fossil fuels,” said Kerwin Olson, executive director of the Citizens Action Coalition. “And we believe that can be done in a thoughtful, meaningful, comprehensive way. Why would we put something in permanent statute that really flies in the face of addressing the climate crisis in a real way?”

He added that the coalition “has no interest in dramatically increasing costs on poor people,” and contrary to what some backers of the bill have said, future home heating electrification would likely not have this effect, especially as the cost of electric heat pumps comes down.

Clean energy advocates also note that if legislators are concerned about consumer choice, they should make sure consumers have more access to solar power.

At a Jan. 13 hearing in an Indiana House committee, Rep. Matt Pierce, D-Bloomington, suggested the bill should include a measure to prevent homeowners associations from using restrictive covenants to block residents from getting solar panels — a widespread predicament in the state.

HB 1191 author Rep. Jim Pressel, R-Rolling Prairie, said that while he supports solar, his constituents have concerns about aesthetics, so he is reluctant to add a solar component to the bill.

At the Jan. 13 hearing, Pierce asked Pressel whether any proposals to limit natural gas heating have been floated in Indiana. Pressel acknowledged they have not been, but cited local laws in Berkeley and San Francisco that prohibit gas heating for new construction.

“Natural gas is the angst behind this,” Pressel said at the hearing, invoking the “possibility of banning gas-fired water heaters, gas-fired appliances, gas-fired barbecue grills.”

“Natural gas is probably one of the most reliable and cost-effective ways to heat your house and we should not have a ban on any source of energy if it makes sense,” Pressel continued.

Representatives of the state’s trade associations of builders and manufacturers testified in support of the bill, arguing that it is crucial to ensure competitiveness in Indiana’s manufacturing and construction sectors. The bill is co-authored by Rep. Edmond Soliday, R-Valparaiso, who has pushed multiple bills considered hostile to renewable energy.

Olson said industry representatives and legislators appeared to be misunderstanding the bill, which was scheduled for a vote last week before the state capitol was closed amid widespread protests from groups attempting to overturn the presidential election results.

He added, “No one is talking about removing existing infrastructure in place, ripping that out and forcing people to go electric. These bans are all about new construction, new development. Furthermore, most of these bans I’ve read about include significant exemptions especially for the manufacturing and industrial sector. This is a one-way bill. This bill is not about choice, it’s about the utility’s right to furnish service regardless of the energy source. … There’s nothing in this bill that protects the rights of private property owners to generate their own energy, or to lease their land to third parties who wish to invest in renewable energy on their property.”

Jesse Kharbanda, executive director of the Hoosier Environmental Council, explained that gas appliances and gas home heating can have significant effects on indoor and outdoor air quality, with public health impacts most prominent in low-income communities with substandard housing. He cited a California study showing the risk of carbon monoxide, formaldehyde and other pollutants from natural gas appliances.

In addition to Kansas and Missouri, similar bills are also being discussed in Tennessee, Kentucky, Oklahoma and other states, according to testimony at the Indiana hearing. Critics suspect the bill is being pushed by the conservative American Legislative Exchange Council — which often advocates for model bills in state legislatures and includes fossil fuel and utility interests among its members — though they don’t have proof of ALEC’s involvement.

David Kolata, executive director of the Citizens Utility Board in Illinois, said that while nothing has been proposed in that state yet, he’s heard talk of the issue and expects a bill to surface in the near future. Kolata said that preventing a transition to electricity for home heating would be especially harmful to consumers in Chicago, where natural gas rates are rising quickly because of an expensive pipeline replacement project undertaken by utility People’s Gas.

“Look, if the state and cities like Chicago are to reach their climate change goals, we have to triage and transition away from natural gas,” Kolata said. “We think that can be done in a way that saves consumers money, but there are obviously a lot of important and complicated policy issues that need to be worked through. We don’t think it makes sense at all to put our collective heads in the sand and ignore that we need to move on from natural gas heat.”

He added that while the proposed Clean Energy Jobs Act calls for carbon-free electricity generation by 2050 in Illinois, there are no immediate pushes for banning natural gas, either for home heating or electricity generation. And he said clean energy advocates agree there might be a long-term role for natural gas in heavy industry or other situations. Nonetheless, the prices of electric heat pumps are coming down, and natural gas prices have in the past been volatile, so electrification could be good for consumers as well as the environment.

“Ultimately we have a situation with good opportunity to improve the environment and save consumers money,” Kolata said. “One of our frustrations is that nationally a lot of folks are not really confronting it head-on,” but instead are using bills like that in Indiana to “short-circuit the debate and potential solutions.”

Kharbanda worries the Indiana bill could have ramifications beyond its specific mandates.

“The bill could well discourage local governments, in the future, from using their policy tools to try to address greenhouse gas emissions and to adapt to increasingly unstable or extreme weather, on the worry that another out-of-the-blue bill, like HB 1191, might emerge,” Kharbanda said.

He thinks the risk is exacerbated by the fact that the legislature does not allow virtual testimony, so the pandemic has greatly curtailed civic participation. Olson was the only citizens’ advocate to testify in person during the proceedings, and Kharbanda noted that normally dozens of groups and individuals often testify on energy bills.

“Such legislation could also discourage civic engagement, especially among young people,” Kharbanda said. ”Young people have been at the forefront of trying to address climate change at the city level … and if they feel that their hard-fought efforts could be swiftly undermined — or eliminated — in a fast-moving legislative session, they may well be much less likely to be involved in the civic process.”