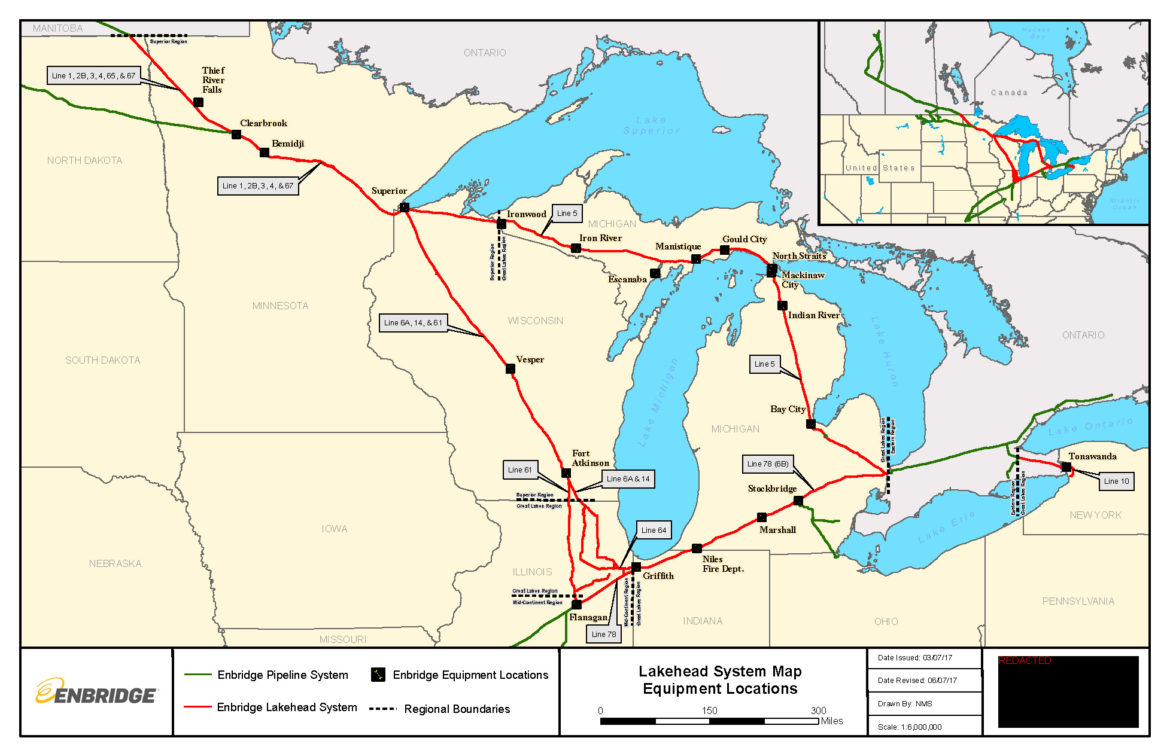 A 2017 map illustrates Line 5’s route among the network of Enbridge pipelines called the Lakehead System. Leaders of the Bad River Band of Lake Superior Chippewa, whose reservation on the south shore of Lake Superior is crossed by Line 5, say the pipeline should be decommissioned and its contents diverted through other routes.

The Chippewa tribe in northern Wisconsin says Enbridge could reduce the risk to the Great Lakes by diverting Line 5 oil to another line that runs south to Illinois.

As legal battles continue over Enbridge’s Line 5 pipeline, tribal leaders in Wisconsin say the company is ignoring a safer alternative that’s already in the ground — though the company disagrees.

“The notion that Enbridge is somehow going to be stranded without Line 5 is ludicrous,” said Mike Wiggins, tribal chair for the Bad River Band of Lake Superior Chippewa, whose reservation on the south shore of Lake Superior is crossed by Line 5.

The 30-inch pipeline originates in Superior, Wisconsin, and carries crude oil 645 miles across Wisconsin and Michigan to Sarnia, Ontario. Michigan Gov. Gretchen Whitmer recently ordered Enbridge to shut down the pipeline where it crosses the Straits of Mackinac, citing risk to the Great Lakes.

As the company seeks permits for its proposed reroute south of the reservation, Bad River Band leaders say the company is failing to acknowledge the potential to decommission the 67-year-old pipeline altogether and divert its contents through other routes.

Line 5 is part of a network of Enbridge pipelines called the Lakehead System. As Line 5 cuts east and then south around Lake Michigan, Line 61 runs south from Superior into Illinois before connecting with smaller lines that cross Indiana and Michigan and ultimately reach the same destination: Sarnia, Ontario.

Line 61 is newer and larger — the 42-inch pipeline was completed in 2009 and has already undergone multiple upgrades and expansions. The line carries about 996,000 barrels per day to Pontiac, Illinois — about 75% of its capacity.

“The elephant in the room is that Enbridge has invested heavily in their route from Superior down through Chicago,” Wiggins said, in contrast with Line 5, which he calls “the forgotten pipe.”

The environmental risk posed by the pipeline was highlighted in August 2019 when tribal officials discovered 49 feet of Line 5 unearthed less than 5 miles from Lake Superior. The pipeline itself has contributed to the erosion of a steep bank as an oxbow is forming, according to a February 2020 report from the Bad River Natural Resources Department.

The report also cited major storm events in recent years as a cause for concern, which climatologists project to increase in frequency and severity. “We know that the next massive storm system could potentially shear Enbridge’s pipe right in the Bad River, pumping oil into Lake Superior,” Wiggins said. “We’re concerned every day.”

Shutting down Line 5 and relying exclusively on Line 61 would keep the pipeline far away from the Bad River Reservation, and would reduce the risk of a spill in the Great Lakes or anywhere by retiring Line 5’s aging pipes.

An Enbridge spokesperson, however, said Line 61 would not be able to absorb Line 5’s capacity in the event of a shutdown: Not only does it lack capacity, but it couldn’t handle the same materials. Line 5 carries crude oil and natural gas liquids — some of which are used as propane in Michigan’s Upper Peninsula — while the lines connecting Line 61 to Sarnia move only crude.

Instead, in the event of a Line 5 shutdown, more oil would need to be transported by rail or truck, which is not as safe as pipelines, Duffy said. The region could see 2,100 more trucks on the road each day, or 800 more rail cars, he said.

“That’s more or less impossible. Nobody wants to see that kind of truck traffic,” Duffy said. “We believe very strongly that the solution going forward is making sure that the line is transporting this energy in the safest way possible.”

Wiggins’ proposed solution also doesn’t eliminate the risk of pipeline spills, and environmentalists in communities along the southern route have raised concerns about the potential hazards from pushing more oil through Line 61. The route from Line 61 to Ontario includes Line 6B, which ruptured in 2010, spilling more than a million gallons of fluid into the Kalamazoo River.

Enbridge’s permit applications in northern Wisconsin are still under review as the state prepares a draft environmental impact statement. The finished draft will be open for public comment, unless litigation in Michigan cuts short the process. Gov. Whitmer ordered Line 5’s shutdown by May; Enbridge has called the action an overreach of state power and filed a countersuit. The U.S. District Court for the Western District of Michigan has yet to set a hearing date for the case.