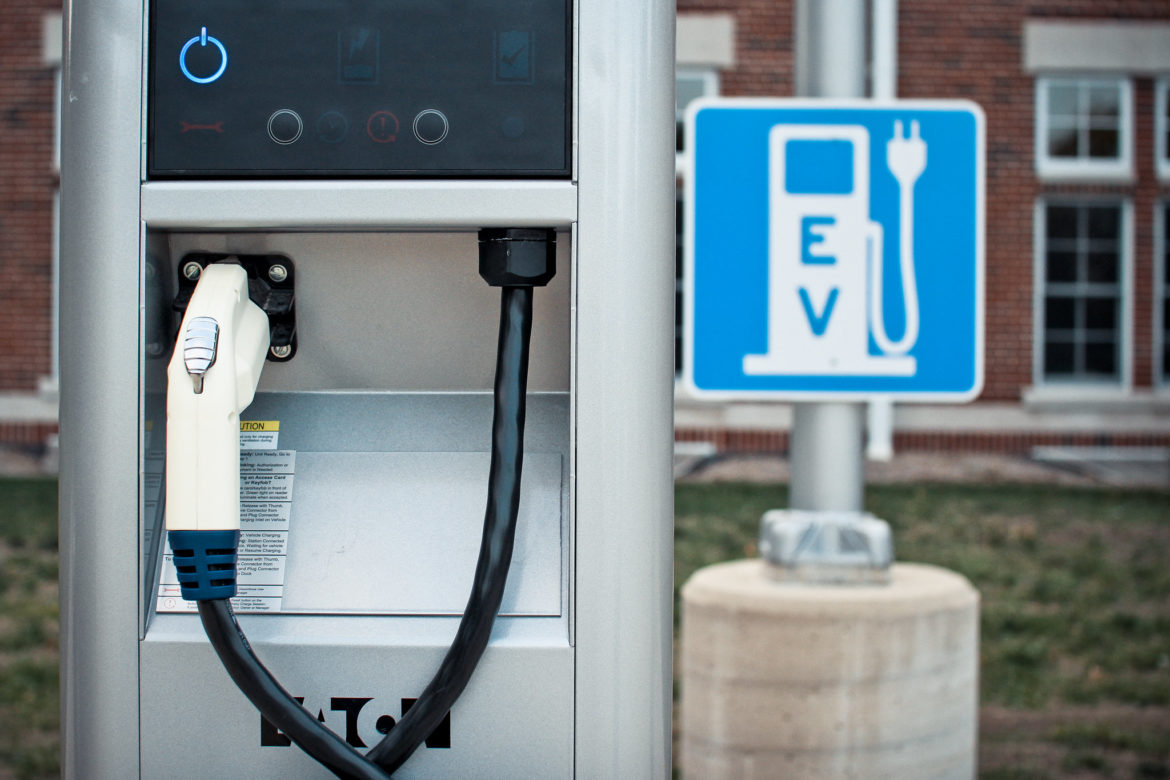 While electric vehicles are relatively uncommon in Chicago, city officials expect their popularity to grow dramatically in coming decades.

Just as resources such as grocery stores, bike lanes, banks, cultural institutions and public transit are often less prevalent in Black and Brown neighborhoods, advocates say that charging deserts represent a significant impediment to making the transition to clean energy.

“There is still a cost differential [between] electric vehicles and gas vehicles. And unfortunately, the market presumption is to mostly go to wealthier majority-white neighborhoods and communities. We need to address both the charging and the vehicles in terms of more equity,” said Susan Mudd, a senior policy advocate at the Environmental Law & Policy Center in  Chicago.

There is also a persistent perception in many BIPOC — Black, Indigenous and People of Color — communities that electric vehicle ownership is just too expensive. But advocates of electric vehicles are actively working to close the gap in charging deserts and educate the public about the enduring benefits of making the transition to electric vehicles.

“The idea is that it’s revisiting this technology and ensuring that we are well-represented in a part of this conversation at all levels,” Travis said. 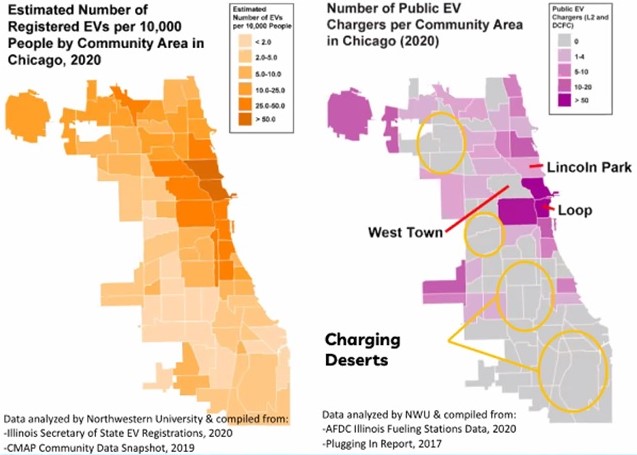 A graphic provided by Jitney EV shows the concentration of electric vehicle registrations and public charging stations in Chicago.

Both the city of Chicago and the state of Illinois are taking steps to improve access to charging stations. The Electric Vehicle Supply-Ready Ordinance, passed in April, requires new construction of residential buildings with five or more units and onsite parking, along with commercial properties with 30 or more units, to make 20% of all parking places ready for charging stations. At least one of those spaces must be made accessible to people with disabilities.

Likewise, the proposed Clean Energy Jobs Act incentivizes electric vehicle charging for medium and heavy-duty vehicles across the state of Illinois. The proposal would also create the EV Access for All program to support low-income electric car-sharing and “last mile” shuttles concentrated in areas with limited transit service.

The Clean Energy Jobs Act enjoys broad support among advocacy groups such as the Sierra Club and the Illinois Environmental Council, which views the proposed legislation as a means of enhancing equity along with reducing dependency on carbon-based fuels.

Matt Steffen of the Illinois Environmental Council notes that in addition to providing support for thousands of new charging stations, the legislation “would also create an inclusive process by which environmental justice and low-income communities inform the location of charging stations in their communities through the creation of Beneficial Electrification Plans.”

Jitney EV, based in Chicago’s predominantly African American Bronzeville neighborhood, advocates for more equitable distribution of charging stations throughout the city. The company is also working to launch a Mobility as a Service (MaaS) network of shared rides utilizing a fleet of electric vehicles.

“Industry attention, societal attention, the public’s attention is all focused on this because the planet is on fire,” said Billy Davis, Jitney EV’s general manager. “Now is the opportunity, when it is most visible, to encourage people to act because we can see that climate change is happening.”

“We want to have different forms of EV transportation — micro transit. Mobility as a Service, little demonstration models like our original concept,” Davis continued. “But we’re also engaged in job creation by pushing for community charging stations and encouraging renovation projects at multi-unit [residential buildings]. That involves charging installation systems, solar installation, HVAC renovation. Some buildings might convert to a heat pump [which is] much more energy efficient, getting away from natural gas, moving everything away from fossil fuels toward green energy in our community.”

“So that’s why it’s important to have a stakeholder investment in community charging. The city, the state, [and] the providers. Because you have to have access to the public way. There have to be community [charging] stations, not just in private parking lots that you have to pay to get into, but on city streets that are accessible,” Davis said. 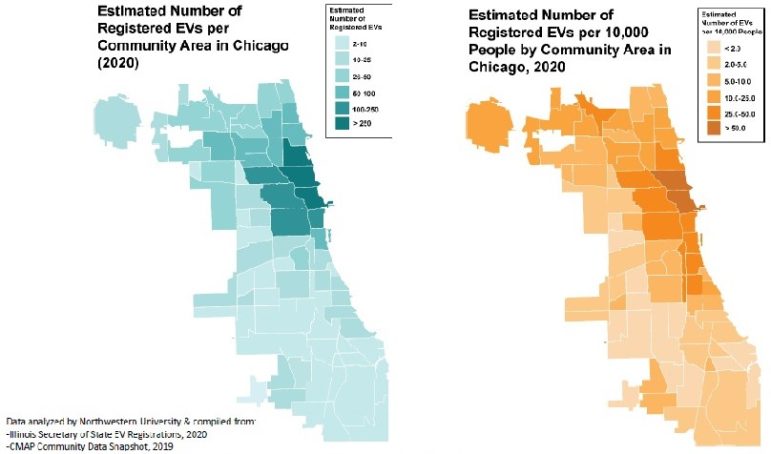 A graphic provided by Jitney EV shows the number and concentration of electric vehicle registrations in Chicago neighborhoods.

In one sense, the occurrence of electric vehicle charging deserts is a chicken-and-egg dilemma. And if charging access is the chicken, the egg is a persistent perception that electric cars are too expensive to own and operate.

Organizations like EVHybridNoire are working to address both sides of the issue, especially educating Black and Brown communities about long-term cost savings of electric vehicles.

“The work that we are doing is really to address this, to help folks understand that there are electric vehicles at every price point,” Travis said. There are used electric vehicles for sale starting at $5,000, he said. “And so, the single mom, single dad, or grandfather, uncle — the community can benefit from any transportation that requires less maintenance, requires lower operational fuel costs.

“We do a lot of work around ensuring that communities … are included in the conversation before infrastructure is deployed. So the community can see the asset and understand that it’s a community asset.”

Seeing more electric vehicles on the road will also accelerate the process of adoption among the BIPOC community, according to Davis.

“It [works] more subliminally. You see more acceptance; you see more mental reinforcement. So, you never experience the range anxiety that people have,” he said. “Having that subtle reinforcement before you’ve even purchased it, when you see more EVs on the road and you see more charging stations on city streets and on highways, then you have that reassurance that you’re not going to run out of [charge], like you would run out of gas between stations. Range anxiety dissipates.”

And while new electric vehicles are still more expensive than comparable gas-powered vehicles, prices are coming down. The secondary market, along with subsidies and other incentives, has also made electric vehicles more affordable. On an aesthetic level, the driving experience compares favorably to that of gas-powered vehicles, which appeals to drivers who enjoy operating a vehicle, according to Davis.

“Just the sensation, the driving experience of an EV is dramatically different from a gas car in an internal combustion engine,” Davis said. “Even with the hybrids, you don’t notice how much vibration there is and how that affects your driving experience. … It’s much smoother, much quieter. It’s a more exhilarating driver experience, especially if you’re someone who appreciates the tactile sensations of driving. It’s just far superior and you won’t want to go back.”

Electric vehicles are also more stylish now, another aspect which has helped improve adoption, according to Davis.

“This is what’s coming. We’re not going to be driving internal combustion engines much longer. You know, it’s just a matter of time, as soon as we reach critical mass. And these cultural barriers will dissolve away, because new models are more stylish. They appeal more to the psychographics of both of Black and Brown consumers.”