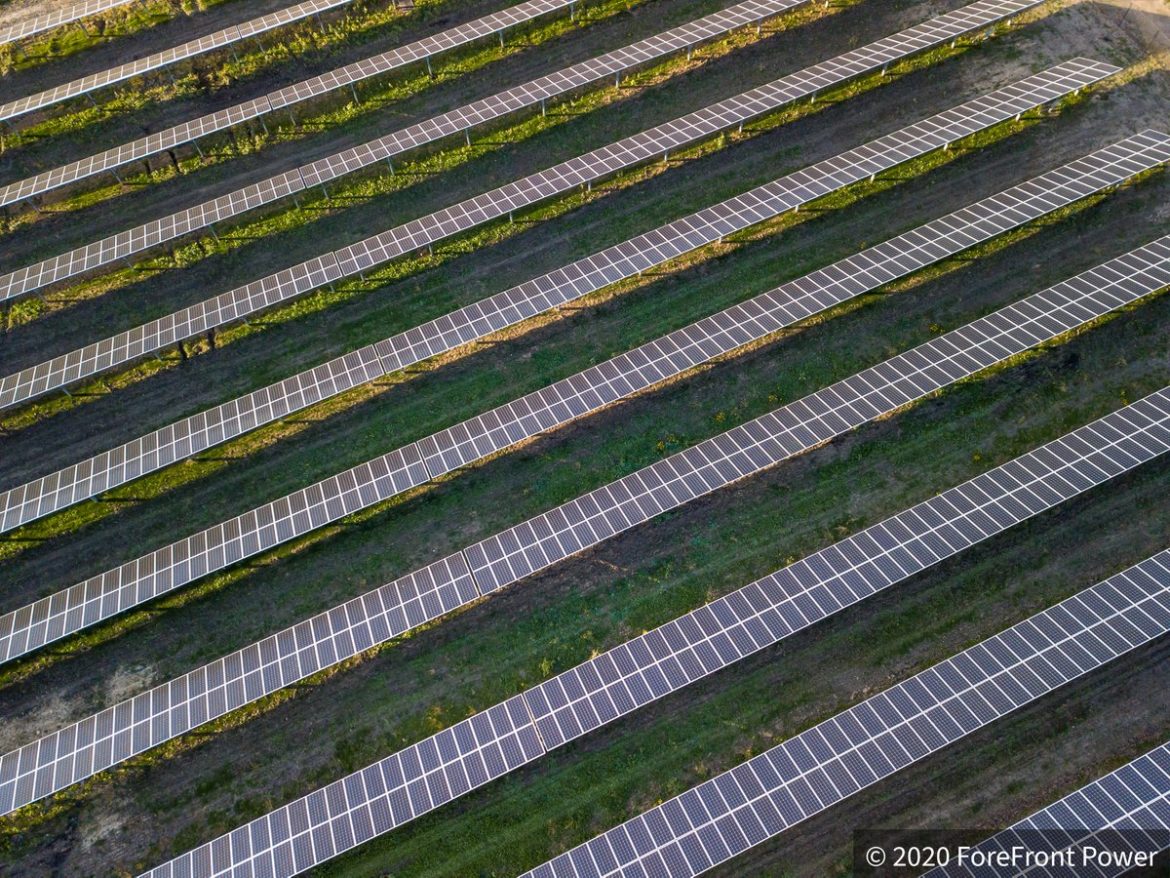 Hopes for new Illinois energy legislation this year have been dashed by the pandemic-related cancelation of the state’s annual November veto session.

Several new energy bills are pending in the state legislature, including the Clean Energy Jobs Act, backed by clean energy and community groups, and the Path to 100 bill, backed by renewable energy developers. With the veto session nixed, solar developers and advocates are looking to 2021 but say the nascent industry may suffer irreparable harm in the meantime.

The news comes as several solar projects are being unveiled, demonstrating the success of incentives created by the 2017 Future Energy Jobs Act — incentives that will no longer be available unless new legislation passes.

The state’s largest solar installation on a school went online this month, part of 23 megawatts of solar developed and owned by ForeFront Power. The company has invested $46.7 million in Illinois under the Future Energy Jobs Act, with more major projects slated to go online soon, according to Rachel McLaughlin, vice president of sales and marketing.

Meanwhile, suburbs north of Chicago this month launched a program to offer residents guaranteed 20% savings if they subscribe to community solar projects that were also made possible by the 2017 law.

When the Future Energy Jobs Act passed, “all of a sudden solar made sense for customers in Illinois,” said McLaughlin. “But now the incentives are gone. We have demand from customers every day, but we won’t be able to do [new installations] without something like Path to 100. … Without a long-term consistent program that provides certainty for the market, we’ll continue to see these boom and bust cycles.” 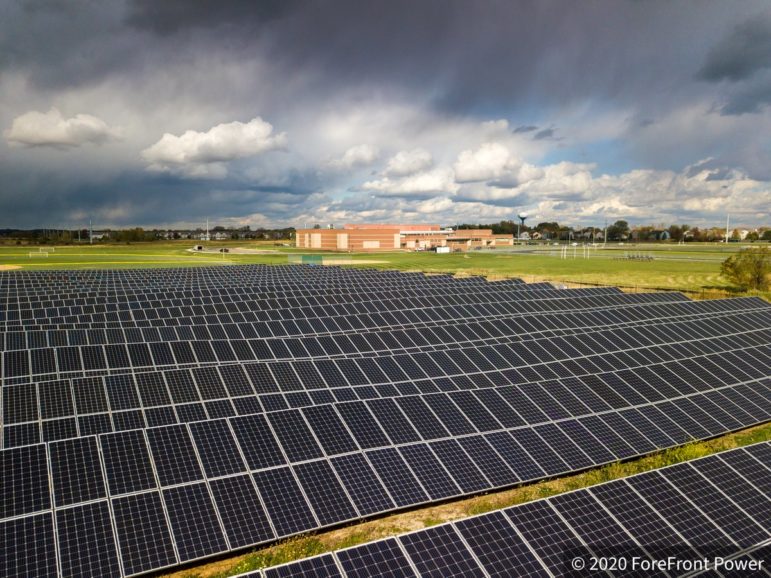 The ForeFront project with the Huntley school district involves three ground-mounted installations totaling 5.5 MW on farmland owned by the district northwest of Chicago. The district has a power purchase agreement with ForeFront, which owns the installation and sells solar renewable energy credits made available by the Future Energy Jobs Act as well as collecting federal tax incentives.

Huntley CFO Mark Altmayer said that based on the low 20-year rate they’ve locked in with ForeFront, the school district expects to save at least $200,000 a year compared to what it would have paid utility ComEd otherwise. The money is crucial to a cash-strapped district in a state that ranks dead last for state contributions to education funding.

“We’re going to spend money on learning versus burning” fossil fuels for energy, said Altmayer, who is also president of the Illinois Association of School Business Officials. “Every dollar we save is a dollar that can go into the classroom.”

Altmayer lamented that other schools won’t be able to do similar projects unless new energy legislation passes. “Solar will die if Illinois doesn’t do anything, that’s the unfortunate piece,” he said. “I’m at one of very few school districts in the state that did this. After we pulled the trigger, I talked about it at national conferences, and every school in the state wants to do this now.”

The solar renewable energy credits that ForeFront is able to sell, passing the savings on to the school district, are worth about $5 million a year, McLaughlin said. Combined with an inverter rebate and the federal tax credit, much of the cost of the array is covered.

The solar credits “are a huge win-win for us as well as ForeFront,” Altmayer said. He noted that the school district also benefits from sending energy back to the grid through net metering, though ironically that might put the district in a bind if schools continue to be online-only during the pandemic — using little electricity — and the panels generate more energy than net metering ComEd customers are supposed to send back to the grid.

ForeFront is providing kiosks for every school building showing real-time energy generation and analytics, and providing curriculum to help educate students and teachers about solar energy. Altmayer said it’s a key component of the district’s larger sustainability initiatives, which include LED lighting and replacing diesel buses with cleaner propane ones.

ForeFront, a subsidiary of the global company Mitsui, also developed and owns a 2,900-panel array for the auto supplier Aisin located about 300 miles south of Chicago, another power purchase agreement arrangement involving incentives under the Future Energy Jobs Act.

McLaughlin said 71 jobs were created by their Illinois projects, most of them being “high-quality union jobs.” A coalition of labor unions that this fall entered the legislative negotiations has expressed particular interest in installing solar on schools, and public sector projects like schools require a set prevailing wage and often union labor.

Residents of seven communities on the North Shore north of Chicago can subscribe to community solar projects and get guaranteed 20% savings under agreements brokered by the communities and multiple developers under the wildly popular community solar incentive program created by the Future Energy Jobs Act.

The communities also secured promises that there would be no credit checks or termination or enrollment fees, and all billing is handled through one provider, simplifying the process.

“We’re showing people there are options today to go solar that are very easy and that save the environment and actually save you money,” said Art Wilde, co-founder of the group GoGreen Deerfield, which is helping promote the solar program. “This is what people have been asking for, for many years, and it’s here now — so let’s do this.”

Wilde signed up for a similar community solar program earlier this fall and wants to help educate residents about the ease and potential.

“People who have been pondering private solar panels — those people will definitely find this appealing. It’s so much easier, you don’t have to make all these assessments and calls,” he said. “And from there the next level of interest comes from people who’ve wanted to go solar, but really haven’t had the time to look into it, and, wow, here’s something our village is supporting and all you have to do is click this link and get on the waiting list.”

The towns since last fall have been getting energy for municipal operations through the first community solar project to go online in Illinois, also sparked by the Future Energy Jobs Act — a 3,700-panel array in one of the communities, Elgin.

Glen Cole, assistant to the village administrator in Lake Bluff, said the new community solar program for residents grew out of the Elgin project’s success — Lake Bluff estimates it will save $12,300 a year during its 20-year term.

Cole said town leaders were motivated to make sure residents could access solar under beneficial conditions negotiated by the governments, especially since some alternative retail electric suppliers have peddled deceptive or problematic renewable energy deals in the state.

In early November, just a week after the program was announced, 90 residents were already on the waitlist. Thus far developers have committed a total of 10 MW available for community solar subscribers in the seven municipalities, and Cole said he expects the scale to grow.

Cole said the program appears to be unique, especially given the fact that the municipalities sought commitments from developers rather than running a typical competitive request for proposals.

“Our residents are not seeing the movement they want on climate and energy issues nationally, so we’re being asked to do what we can,” Cole said. “We’re not energy brokers by trade, but we found an innovative solution that contributes to making those changes in our state and our nation. It’s a cool program.”

The large community solar and ForeFront projects will help Illinois make progress toward its renewable portfolio standard of 25% renewable energy by 2025, though the state is still far from meeting that target, and delay in passing energy legislation will only exacerbate the problem.

“The more solar they build — it of course replaces other forms of power, namely coal here in Illinois,” he said. “We reduce our carbon footprint, and if people save some money that’s good too.”