The paper covered the day’s events — rallies and teach-ins attended by millions — across the entire country, from New York to California. These days, that kind of wall-to-wall coverage would be called “flooding the zone.”

Two articles, one from New York, the other from Washington, made it onto Page One of the next day’s paper, with a top-of-the-page photo of crowds on a carless Fifth Avenue.

The Earth Day coverage continued for nearly two full pages inside. Yet for all the newsprint The Times devoted to the event, the accounts were mundane, weighed down by politicians’ speechifying and descriptions of community cleanups and other feel-good activities. 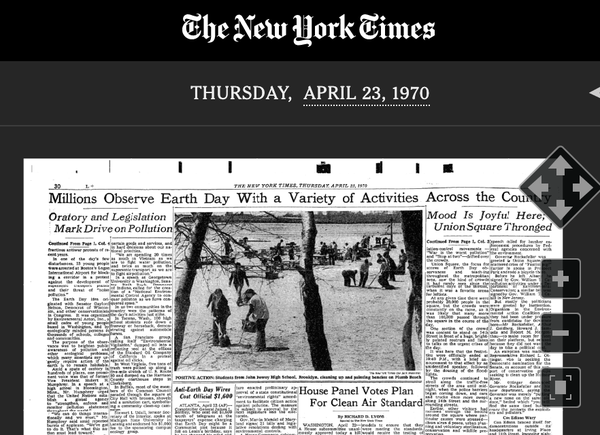 Earth Day As It Happened

A “secular revival meeting” with a lot of hot air from politicians: Read The New York Times’s coverage of the inaugural Earth Day in 1970.

It’s true that news writing a half-century ago was considerably stiffer and stuffier than it is today; undoubtedly, that accounts for some of the dryness of the Times’s coverage. But the subject itself did not lend itself to high drama.

Earth Day generated a different sort of activism than the kind Americans had experienced in the previous decade, when racial inequality and the Vietnam War were at the forefront.

On those issues, protesters took stands that were often unpopular and opposed by many, including the police and other government institutions. Rallies and demonstrations were sometimes met with force. Just six months before Earth Day, antiwar protesters had been tear-gassed in Washington. Just two weeks after Earth Day, four were shot and killed at Kent State University in Ohio.

But almost no one opposed Earth Day. As Joseph Lelyveld, a reporter who went on to become the paper’s executive editor in the 1990s, wrote in his Page One story about the day’s events in New York, “if the environment had any enemies they did not make themselves known.”

There were a few scattered demonstrations against oil companies, and some dead fish were displayed on Fifth Avenue by people who were pointing to pollution in the Hudson River. Some organizers complained that corporations and politicians were trying to co-opt the event. Nan Robertson, another Times reporter, wrote that “like Mother’s Day, no man in public office could be against it.”

The first Earth Day lacked controversy. It was a day for learning and expressing concern, not for protesting — a big news event, but one with little of the drama and tension that makes for compelling journalism.