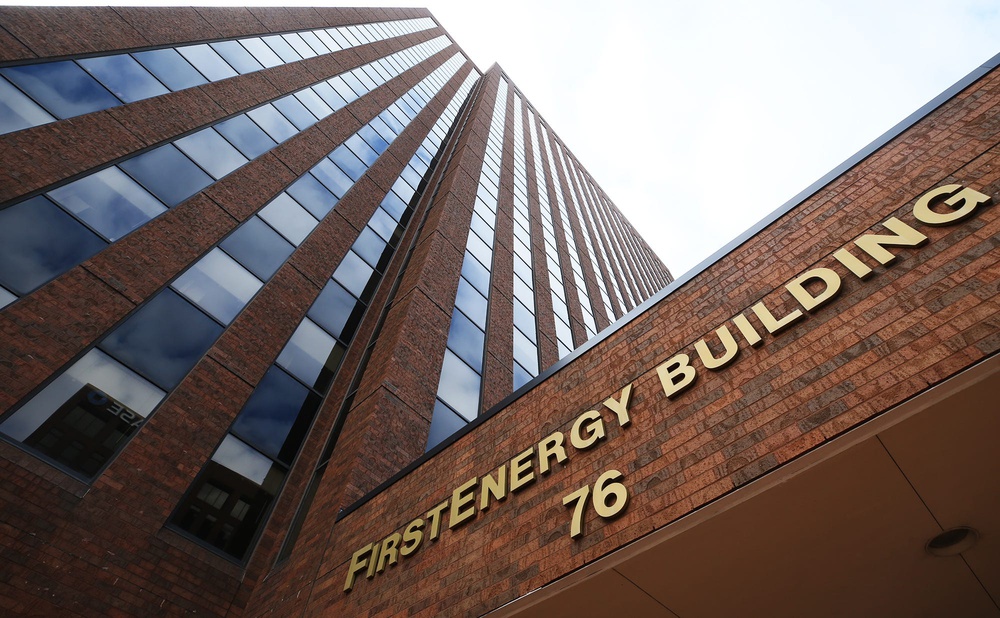 The FirstEnergy Building is pictured in October 2020 in Akron.

The power plant bailout law included what experts call a distorted version of decoupling that guaranteed utility’s revenue regardless of a downturn in electricity demand.

When the coronavirus pandemic struck last spring, energy use patterns were among the many things it upended. As millions of people were forced to change their routines, electricity use changed, too, with an overall decline nationwide.

How much electricity customers use is typically a big factor in determining utility rates and revenue. An unexpected drop in sales can cause utilities to come up short of what they planned to collect from customers.

In Ohio, FirstEnergy and other utilities had less to worry about, though, thanks to a measure in the state’s controversial power plant bailout law that cut the link between revenues and the amount of electricity sold.

The concept is known as decoupling, and it’s usually used as a tool to overcome utilities’ financial disincentive to invest in energy efficiency and conservation. Utilities that help customers conserve energy still collect the money they need to cover costs and a reasonable return for investors.

In Ohio, however, lawmakers didn’t use decoupling to offset losses due to energy conservation. Instead, HB 6, the law at the heart of an alleged corruption conspiracy, gave utilities that spoonful of sugar without any medicine. In fact, HB 6 eliminated energy efficiency standards for Ohio utilities.

The end result: Amid a pandemic that saw the state’s economy falter, FirstEnergy’s utilities were guaranteed steady revenues — at the expense of ratepayers struggling to make ends meet.

“In Ohio’s case, what they’re calling decoupling I wouldn’t call decoupling at all,” said Martin Kushler, a senior fellow at the American Council for an Energy-Efficient Economy. “It’s basically a guaranteed set of revenues based on a very high revenue year in perpetuity, which makes no sense at all. It’s not connected to anything tangible that I can see, other than guaranteed revenues for the companies.”

“You literally could not come up with a better insult to consumers” than the pro-utility scheme in HB 6, said Ashley Brown, who heads the Harvard Electricity Policy Group and previously served on the Public Utilities Commission of Ohio. “It’s impossible.”

True decoupling programs are much different from provisions in HB 6,  experts say.

“Under perfect regulation you would perfectly forecast what sales were going to be and set rates accordingly,” Kushler said. “Sales would match that forecast, and you would recover just what you were supposed to recover” as a utility.

However, forecasts aren’t perfect. Estimated costs and estimated sales can be either more or less than planned. The reasons can stem from extreme weather, shifts in the economy, or other factors—especially something like the COVID-19 pandemic.

Forecasts also can be off due to ongoing changes in the energy sector, including the move toward more energy efficiency and distributed generation.

“What decoupling does is it separates the amount of kilowatts you see consumed from the price you pay for your electricity, and it sets the price needed for electricity based on what’s actually needed to run the utility,” said Dan Sawmiller, Ohio energy policy director for the Natural Resources Defense Council. Decoupling then allows for an adjustment if subsequent review shows that the forecast and kilowatt-hour sales didn’t actually match.

“Decoupling is a means to an end,” Sawmiller said. “It’s not the end in itself.”

In particular, decoupling was initially designed to promote the public interest in energy efficiency and conservation, instead of the private interests of utility companies, Brown said.

“If you don’t have decoupling, every additional kilowatt hour of sales increases the utility’s revenue and increases the bottom line that goes to the shareholders,” said Carl Linvill, a principal with the Regulatory Assistance Project. “The utility actually has a financial incentive to try to sell as much electricity as possible.”

That desire to sell more electricity can clash with goals to increase energy efficiency, demand response, conservation, and distributed generation and storage. Decoupling aims to remove the incentive while still making sure a utility gets the money necessary to recover its costs and compensate shareholders for their investment in the company.

That rationale applies even when utilities provide only transmission and distribution services, and not generation. “If you don’t have decoupling, there will always be a greater incentive to sell more and a lesser incentive to promote energy efficiency and so forth,” Linvill said.

Linvill and others recently analyzed decoupling’s impacts on electricity rates, based on data for 21 U.S. utilities from 2005 through 2017. Roughly two-thirds of the time, true-ups adjusted rates upward, while the other third were downward adjustments that lowered rates. In any case, the group found, the majority of rate adjustments were very small—in the range of plus or minus 1%. The report was in the December 2020 issue of The Electricity Journal

The study did not address the reasons for the increases. Linvill noted that the time period covered by the analysis included the 2008 recession and the recovery period afterward. There also could have been systematic errors. And demand may not have increased as utilities expected. Several states adopted energy efficiency standards during the study period, including Ohio.

“We regard energy efficiency as the cheapest and cleanest resource, and we should use it first and use it more,” said Tom Bullock, executive director of the Citizens Utility Board of Ohio. When decoupling brings a utility’s financial incentives in line with its adoption, ratepayers save money and air quality improves as a result of less power plant pollution, he noted. Decoupling also benefits the system by avoiding or deferring costs for new generation or distribution.

“But you don’t need it if you do what the state of Ohio did in HB 6, which was to completely end and dismantle energy efficiency on the electricity side,” Bullock said.

The opportunity for a downward rate adjustment might also justify decoupling without an energy efficiency standard, Kushler suggested. But HB 6 does not allow that possibility at all.

‘A double tilt’ in Ohio

In addition to the absence of an advantage for consumers, Bullock said, “FirstEnergy gamed decoupling to its advantage in HB 6 by taking the most lucrative year on recent record as their baseline year for calculating what level of payment decoupling would give them. So there’s a double tilt to the playing field in FirstEnergy’s HB 6 decoupling.”

Revenues in 2018 reflected both a cold winter and a hot summer, which likely affected demand for electricity. Rates that year also included various cross-subsidies and a lost-revenue rider for energy efficiency programs that are no longer offered. Nor have either HB 6 or regulators adjusted the profit levels that utilities can reap.

In late December the PUCO let FirstEnergy’s utilities further increase the amounts they get as a result of the HB 6 provisions, effective in January. The Ohio Attorney General’s office has asked the Franklin County Court of Common Pleas to delay collection of additional money under the revenue guarantee provision until the court rules on the merits of its claims against FirstEnergy and others.

Until the court acts, however, FirstEnergy’s utilities can collect the money. Senate Bill 10 was introduced last week to address decoupling, although Ohio lawmakers still haven’t acted to repeal other aspects of HB 6. The company did not respond to a request for comment for this article.

The Ohio Consumers Counsel estimates that FirstEnergy ratepayers are set to collectively overpay more than $310,000 per day in 2021, according to spokesperson J.P. Blackwood.

“The sweetheart deal for recession-proofing that the Ohio legislature gave to FirstEnergy in HB 6 will cost its consumers much more of their hard-earned money in 2021,” Blackwood said.