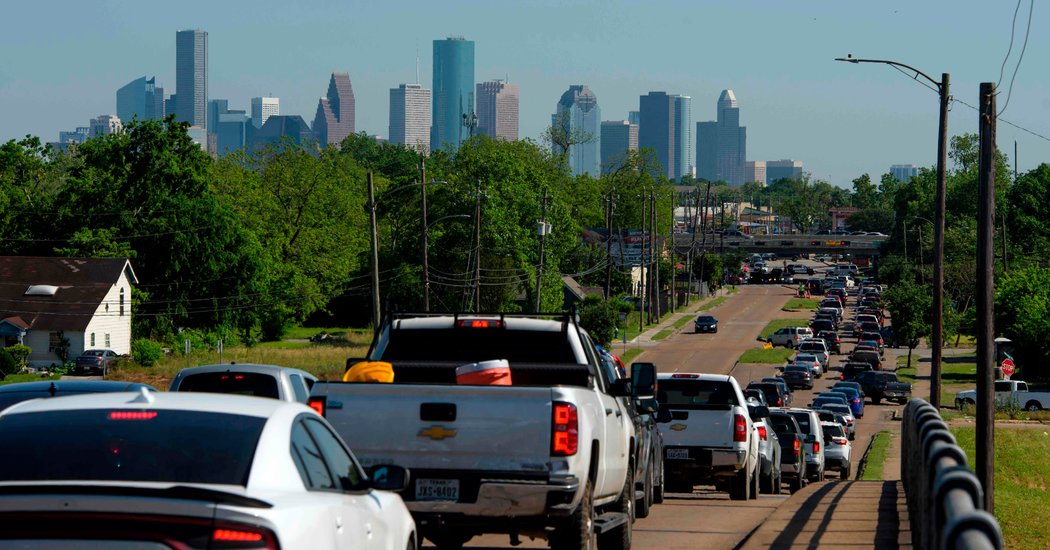 HOUSTON — On the same day that the price for U.S. crude oil fell to about $30 below zero — a mind-bending concept that marked the first time oil prices had ever turned negative — Mayor Sylvester Turner of Houston, the self-proclaimed energy capital of the world, stood before reporters. His words were grim and muffled by the black mask covering his face.

The mayor announced that city employees would soon be furloughed, but he declined to say how many. The Houston Zoo, he said, could expect to see funding deferred under what he called “the worst budget that the city will deal with in its history.”

Cities across the country are struggling under the economic shadow of the coronavirus. But few have to deal with a collapse in their fundamental industry at the same time.

“We’ve probably seen within weeks the same amount of economic shock that used to occur in years,” said State Senator Paul Bettencourt, a Houston Republican whose district includes the Energy Corridor, a stretch of Interstate 10 on Houston’s west side that is home to Shell, ConocoPhillips and other oil and gas giants. “We’ve gone through this before. The problem is we didn’t do it in the middle of a pandemic.”

Energy conferences that drew oil executives from around the world to Houston have been called off. Budget analysts expect a loss of more than $100 million in revenue for city government, with sales tax revenue alone expected to drop by 30 percent for the month of April.

Thousands of energy workers, some of whom only lately moved to the region to take advantage of the recent prosperity, have been laid off. Many of them were told the bad news during painful Zoom sessions from home.

Warning letters from energy companies have been flooding the Texas Workforce Commission about layoffs and furloughs: 3,500 at Halliburton, 223 at Tenaris, 184 at Baker Hughes, 102 at Diamond Offshore Drilling, 95 at Energy Transfer.

“This feels like the early ’80s when we were in the oil price crash, but it’s the one-two that’s horrifying — the one-two punch with Covid and the oil prices,” said Annise Parker, who served as mayor of Houston from 2010 to 2016, referring to Covid-19, the disease caused by the coronavirus. “It’s going to be devastating.”

Bob Dunston, 60, who was an engineer supervisor, had worked for 18 years at Weatherford International, one of the world’s largest oil field services companies. On April 9, he found himself on a Skype call with his boss’s boss and a representative from human resources.

“He said, ‘Hey, you’ve been a great employee. You’re one of my best employees, and this and that, but with oil the way it is right now, at 20 bucks a barrel, we’re just having to reduce the division head count,’” said Mr. Dunston, who had been working from home during the local coronavirus lockdown.

Mr. Dunston is still trying to recover from Hurricane Harvey in 2017, which pushed 15 feet of floodwaters into his two-story townhome. In a new home, but without a job, he is unsure what is next.

“My game plan may be just retire,” Mr. Dunston said. “I saved money for a reason.”

Houston is no longer the oil town it was in past decades. Its economy has diversified, as has its population. More so than cowboy boots, scrubs are its unofficial uniform; the Texas Medical Center is the largest medical complex in the world, with more than 100,000 health care workers.

But much of Houston’s energy still comes from energy.

Business owners of all types make it a daily habit to check the price of West Texas intermediate, the benchmark for U.S. crude oil prices. The Houston Marathon is officially known as the Chevron Houston Marathon. One of the city’s most respected disaster-recovery leaders, whom the mayor recently named as his Covid-19 economic recovery czar, is Marvin E. Odum, the former president of Shell Oil.

Houston’s cultural institutions and nonprofit groups rely on philanthropy from the oil and gas industry. The city has had world-class opera, theater, ballet, symphony and art in large part because it had world-class oil money.

Now, all of that is under threat.

“The oil and gas industry employs about a quarter of a million people in Houston, so we’re looking at losing at least 10 percent of those jobs, if not more,” said Patrick Jankowski, senior vice president of research at the Greater Houston Partnership, a regional business association. “Right now, I think people are probably more worried about their job than they are about Covid-19.”

More than 240,000 Houstonians filed unemployment claims from March 15 to April 11, a number certain to rise as the backlog is processed.

“We may be heading toward that recession,” Mr. Jankowsi said. “Intellectually, I can see that we’re there. Emotionally, I have a hard time accepting it. Once you start saying we’re in a recession, it conjures up so many images and so much pain.”

As the damage to the economy widens not just in Houston but throughout Texas, Gov. Greg Abbott said he would announce on Monday his plans to expand the reopening of the state’s businesses. The governor has said he wants a “phased-in” reopening, but the end of any coronavirus limits will not reinvigorate the oil and gas sector as long as prices remain so low.

Houston has been through oil booms and oil busts before. The oil downturn of the 1980s was the worst ever, costing the region one in seven jobs. But now even the Petroleum Club of Houston is closed, along with bars, malls and churches.

One man who was laid off from his job as a manager for an oil field services company said he felt as though he was “forced into a holding pattern, where you’re sitting at home, you’re looking for stuff on the internet, talking to people on the phone, but you’re not active.”

Another laid-off energy employee, who worked as a geologist, said social-distancing made it harder to build relationships that would open doors to a new job. “It’s really challenging when you can’t go shake hands with somebody or have a coffee with them,” he said.

The two men did not want their names published, for fear it could harm their ability to find another job.

Oil towns across the country are looking at similar double economic blows.

In the oil-rich region around Kern County in California, which produces 70 percent of the oil in the state, some larger employers have managed to get by with reduced hours for employees, but smaller producers and service companies around the city of Bakersfield have already begun layoffs. The Marathon Petroleum Corporation has temporarily shuttered a refinery east of San Francisco that employs more than 700 people.

States like Alaska, Louisiana, North Dakota, Oklahoma and Wyoming, among others, also face the prospect of budget cuts and layoffs.

“You can’t produce it, you can’t refine it and you can’t sell it,” said Catherine Reheis-Boyd, president of the Western States Petroleum Association, the oil industry trade group representing Arizona, California, Nevada, Oregon and Washington. “That ain’t a good situation to be in.”

In Houston, no one has become more intimately familiar with the details of the oil market woes than Chris B. Brown, the city’s chief financial officer and a fourth-generation Houstonian.

Rare, severe and unforeseen events are known as “black swans,” a phrase that comes from a 2007 book by Nassim Nicholas Taleb, “The Black Swan: The Impact of the Highly Improbable.” Mr. Brown has taken to calling Houston’s situation a “double black swan.”

About 40 percent of the city’s economy is tied to the price of oil, Mr. Brown said. That means that when other cities are recovering from the economic damage of the coronavirus shutdown, Houston will still be lagging.

“We are going to be hit disproportionately hard and probably will have a longer recovery period,” he said, “because once the world gets back on track from coronavirus, it’s going to take probably several years before the imbalance in the oil markets gets to a point where all oil prices come back substantially.”

Across the city, institutions are already dealing with the fallout.

The Heritage Society, which preserves historic buildings in a downtown park, expects a swift downturn in contributions from the energy sector, which typically make up about one-fifth of the nonprofit’s budget.

“It directly affects everything we do, and I feel like the impact is just going to continue throughout the summer,” said Alison Ayres Bell, the Heritage Society’s executive director. “The trickle-down affects everyone.”

This month, on the same day Mr. Dunston was laid off, the Houston Museum of Natural Science announced that it would furlough 337 employees — 70 percent of its staff — and that the pay of the remaining 144 workers would be cut by at least 15 percent. Joel A. Bartsch, the museum’s president, said the slump in oil prices would hurt donations and keep employees furloughed longer, and it would also mean that fewer employees would ultimately be able to return to work.

Mr. Bartsch compared the city’s present struggle to “how Detroit was affected by the car companies and their financial issues.”

ARC Specialties, a company with 46 employees that produces robotic machinery, relies on energy industry clients so much that its headquarters are in the Energy Corridor. The oil and gas sector would annually account for about 30 percent of ARC Specialties’s business, or about $10 million. But no more.

“I’m pretty much going to have to cross that industry off my list for the next year or two,” said the company’s president, Dan Allford, 61.

As the price of oil dropped and business slowed, Mr. Allford asked his employees to volunteer for furloughs. But they instead presented him with an option that would avoid temporary layoffs: a four-day workweek.

“They took the high road and I’m proud of them,” Mr. Allford said.